June 13, 2015
"Fundamentalists and evangelicals (both of whom have been traditionally committed to an infallible or inerrant Scripture) have long been noted for their propagation and defense of an infallible Bible. But more recently, among those who call themselves evangelicals, there has been a marked departure from the viewpoint held by them for so marriagelong. More and more organizations and individuals historically committed to an infallible Scripture have been embracing and propagating the view that the Bible has errors in it...This change of position with respect to the infallibility of the Bible is widespread and has occurred in evangelical denominations, Christian colleges, theological seminaries, publishing houses, and learned societies." [1]

This assessment of evangelicalism was stated by the late Dr. Harold Lindsell in his well-known book, "The Battle for the Bible," published in 1976. Lindsell was quick to qualify his statements that those who believed in an errant Bible were not necessarily "outside of the company of the redeemed," [2] but he was very concerned about what would happen if the doctrine of biblical inerrancy were largely scrapped by the church.

Nearly 40 years later, we see one demonstration, I believe, in Tony Campolo's recent announcement that he had changed his position on homosexuality and urged we "welcome all our gay and lesbian brothers and sisters into the Church." [3]

Compollo is certainly not alone is his announcement. Two years ago, Alan Chambers, former president of Exodus International, apologized and disbanded the very organization meant to help gays and lesbians leave the lifestyle. With similar sentiments as Compollo's, Chambers said he wanted to love his neighbor as himself. Evangelical mega-pastor Rob Bell also announced his support for marriage equality in 2013 and provided a scathing critique of American evangelicalism for its resistance to become gay-affirming.

One need only watch the news, more specifically Christian publications, websites, and blogs to see professing Christian celebrities, Christian denominations, Christian colleges, theological seminaries, etc. inching closer to fully embracing what the Bible unquestionably condemns. No one, and I mean no one, can justify the practice of same-sex marriage or the practice of homosexuality without doing violence to Scripture.

The question is how did we get here? How did so many in the church get so far from the truth. How is it that so many within the ranks of the redeemed have become so confused?

At the risk of being perceived as a religious bigot and a pharisaical prude, I suggest we have moved into an era of apostasy because numerous mainline denominations compromised the authority of Scripture a few decades back.

After I left the pastorate to lead the Christian Action League of North Carolina, my home church had a "meet and greet" session with the new preacher they were considering for a call. During his opening statement to the church, he said that he felt our denomination had gotten onto the wrong track and was in danger of what he called bibliolatry, a term that says you can place the Bible on a pedestal higher than Jesus himself. I recognized right away his statement was a theological red flag and it represented a misleading creed that could harm the faith of the unwary.

When I asked him to explain his statement, a heated debate ensued between us about the infallibility of the Bible. To the surprise of the congregation he admitted that he did not subscribe to the traditional view of the Christian church on Scripture. I argued his view was an erroneous approach and that Jesus so identified himself with the Holy Scriptures that our Lord maintained that to weaken the authority of one only serves to weaken the authority of the other. To truly accept Christ's teachings, I contended, also requires we maintain the highest view of the Bible as a document without error in word or truth.

In lieu of that debate, he withdrew his candidacy for pastor. Fortunately that church is in the hands of faithful leadership today and continuing to grow year after year.

Lindsell, however, warned our abandonment of biblical inerrancy would ultimately lead to just the opposite results for the church. He cautioned it would end in sad days of demise and decline. He wrote:

"It is my contention that once biblical infallibility is surrendered it can lead to the most undesirable of consequences. It will end up as apostasy at last. It is my opinion that it is next to impossible to stop the process of theological deterioration once inerrancy is abandoned. I have said that it is a theological watershed just as the Continental Divide is the watershed for the United States and Canada. The water that flows on one side of the divide ends up in the Atlantic Ocean. The water that flows on the other side of the divide ends up in the Pacific Ocean. But once the water starts down one side or the other, it continues until it reaches its oceanic destination. Errancy and inerrancy constitute the two principles, and which one a person chooses determines where he will end up." [4] 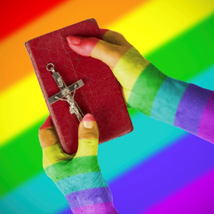 Lindsell also mentioned that the late Francis Schaeffer once told conferees at L'Abri that "The generation of those who first give up biblical inerrancy may have a warm evangelical background and real personal relationships with Jesus Christ so that they can 'live theologically' on the basis of their limited-inerrancy viewpoint. But what happens when the next generation tries to build on that foundation?" [5]

Well, we're now seeing what happens. But I suggest we have yet to see all the negative ways our compromise of Scripture's authority and acceptance of homosexuality will certainly gut the gospel and significantly curtail its spread. With the acceptance of sexual immorality, the endorsement of same-sex relationships, gone in many respects shall be a bona-fide call to repent of sin and be born-again. Severely injured, if not irreparably so, will be God's primary vehicle for evangelism – God fearing mothers and fathers passing down the faith to their children. Gone also will be any real parallel of marriage and Christ's relationship to his bride, the church. Moreover, religious liberty is likely to be so impaired the freedom to practice true religion will be gone, because we rejected and abused it in the day of opportunity.

Is there hope? Maybe there is. However, one thing is for certain. There can never be a surge of new spiritual power, a new advance for the kingdom of God, and a powerful manifestation of the might of God before the unredeemed masses, unless God's own people once again give the Word of God the honor it is due.