May 8, 2016
President Theodore Roosevelt once said, "There are always politicians willing, on the one hand, to promise everything to the people, and, on the other, to perform everything for the machine or the boss, with chuckling delight in the success of their efforts to hoodwink the former and serve the latter. Now, not only should such politicians be regarded as infamous, but the people who are hoodwinked by them should bear the blame."

America has had enough of politicians. Although much of the country has abandoned traditional ethics, enough morality is still left to give most people the instinctive feeling that this nation is on the wrong track. People are looking today for principled leaders. They may not always effectively identify them, but they're impressed when they see a leader operating out of conviction and not political expedience.

The Bible records the shameful accounts of authority figures that sacrificed principle for politics.

Saul was the first king of Israel. He was privately anointed by Samuel, the prophet, in Ramah, and would later be elected by popular assembly at Mizpah. He had an auspicious beginning and was very popular with the people. But his love for the favor of men would soon eclipse his moral compass.

Saul, in direct disobedience to God, preserved the Amalekite king and the best of his cattle and sheep. He didn't really do it for humanitarian or religious reasons as he claimed (I Sam. 15:15). Rather, he was fully prepared to modify social custom and religious conviction to accommodate public opinion, or better said, political pressures (I Sam. 15:21, 24).

In the sight of God, this disqualified him as an effective leader. Samuel told Saul, "Because thou hast rejected the word of the Lord, He hath also rejected thee from being king" (I Sam. 15: 23).

In the New Testament, Jesus charged the authorities in Israel, the Pharisees, for repeating the same error as Saul. He said to them, "Full well, ye reject the commandments of God, that ye may keep your own tradition" (Mark 7:9). In other words, they replaced the clearly delineated directives of God's Word with their own devices. One could even say they redefined God's commands according to the latest notions.

The Pharisees exchanged moral and eternal verities for political contrivances.

Pilate, the Procurator of Judea at the trial and crucifixion of Jesus certainly played the politician. Roman law in Judea would allow the Jewish Sanhedrin to try cases, but they couldn't hand down a death sentence without the approval of the Procurator.

Tried by the Sanhedrin's kangaroo court, Jesus was brought before Pilate for an endorsement of death. It didn't take Pilate long to discern Jesus was innocent. Warned by his wife not to harm Jesus, Pilate wanted to extricate himself from a difficult situation by means of an annual custom of releasing a prisoner of the people's choice. He presented the crowd with the option of the innocent Jesus or a notorious criminal, Barabbas, confident they would choose Jesus. When they surprisingly chose Barabbas, Pilate acceded to have Jesus crucified, but washed his hands in front of the mob, symbolizing he was guiltless of the injustice.

But no symbolism or political ploy could ever wash away Pilate's culpability in that crucial moment. His duty as Procurator was to defend the innocent and punish the guilty, but for the sake of politics he reversed the order and let the guilty go free, while sending the innocent one to His death. And he did this not in ignorance, but with his eyes wide open.

Legions are the politicians like Saul, the Pharisees, and Pilate, recorded in Scripture and throughout the annals of history who did as they did – cowardly men and women who deserted their sacred responsibilities to appease the gravities of politics.

The late Clovis G. Chappell, a great Methodist preacher from Charlotte, North Carolina, defined what the word politician in its worst sense means. He wrote: 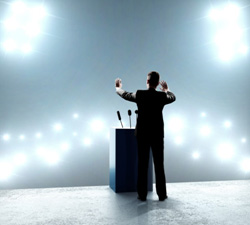 "A politician is a man whose supreme passion is to win and hold office. He is willing to pay just about any price to be elected. Once in power, his one question is how he can stay there. The politician may believe very strongly in his fitness for his place and in his superb capacities to serve his people. But his prime purpose in seeking office is not to serve his fellows, but to serve himself. In the open he is a self-forgetful friend of the people. Behind the scenes he is a friend only to himself and to his henchmen."

To say these are critical times for America is an understatement. As Dennis Prager recently said in a column, "every distinctive value on which our nation was founded is in serious jeopardy."

Contrary to popular opinion, morality most often trickles down in a culture and not up. That's why America can't survive this perilous hour without men and women of virtuous courage and conviction in public life.

Theodore Roosevelt concluded the matter in this fashion: "Civic greatness is at an end when civic righteousness is no longer its foundation."