February 4, 2017
During the late 1960s and early 70s my mother was a country music singer. She had one top ten hit on the Billboard charts – a country version of "The Night They Drove Ole Dixie Down" that went to number 9.

Not that you can't be a celebrity and be a faithful Christian too, but my mother says she wasn't fully surrendered to the Lord during that period. Her complete surrender would ultimately lead her to leave the music business and devote herself to motherhood. I can never be grateful enough for that commitment and sacrifice. She would have been a big star, no doubt. She is incredibly talented. 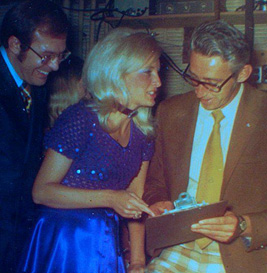 Mom was also a high school dropout. Yet in her 50s, after my sister and I were grown and moved out of the house and were making lives of our own, Mom went back to school, got her GED, then pursued nursing and received her degree and certification at the age of 58. Today she is still a practicing nurse at the age of 77.

You'll forgive me for my bias and boasting, but that's pretty impressive, if you ask me!

To the right is a picture of my mother, backstage after an appearance on the Grand Ole Opry. She was an exceptionally beautiful women in those days, and no less beautiful to me today.

I once wrote a piece for the Christian Post that contained more information about my mother's music career. You can read the article below:

He Bought Up the Records

Not many people are aware of it, and others may have forgotten about it, but my mother had a distinguished country music singing career back in the late 1960s and the early 1970s. Two of her records did very well; her country rendition of "The Night They Drove Old Dixie Down" went to #9 on the Billboard charts; and "We'll Sing in the Sunshine," which was originally a folk tune, reached #24.

Alice Creech was the opening act for some of the most revered country artists today: Ernest Tubb, Dolly Parton, Hank Williams, Jr., Charlie Pride, Merle Haggard, String Bean, Grandpa Jones, Bill Anderson, Tammy Wynette, Loretta Lynn and many more. In addition to being rated #21 of the top female vocalists of 1972 with a single by Billboard magazine, she was also the recipient of two ASCAP (American Society of Composers, Authors and Publishers) awards that same year. She even made a guest appearance on the Grand Ole Opry, when it was previously located in the famous Ryman Auditorium.

About the time my mother was just becoming a major country and western celebrity, she decided to surrender her life to Christ and leave the business so she could be a better mom to my younger sister and me. I earnestly pray I would always live worthy of the godly influence and instructions she gave during the years that followed.

Recently, while attending an Ethics Leaders Conference at the offices of the Ethics and Religious Liberty Commission of the Southern Baptist Convention in Nashville, Tennessee, I retraced some of my mother's steps during her days as an aspiring artist in Music City. I visited the historic Ernest Tubb Record Shop and saw the stage where my mother often performed on WSM's "Ernest Tubb Midnight Jamboree."

But the greatest thrill came when visiting the Lawrence Record Store downtown, where they have a tremendous selection of vintage vinyl records. You can imagine my delightful surprise to discover they had all of my mother's recordings – original labels, jackets and everything. There they were – all of them – ready to play on the nearest phonograph. Naturally, I bought them up to safely put them away.

That experience made me think of a profound truth often forgotten in our day: God has every recording of our lives and He's planning to play them at the Judgment. He has them all – the originals – everything we ever did; the things others either never knew or had forgotten about. It's all there and none of it is omitted. Moreover, there's no spin to it. It's all just the bare and unadulterated truth about who we really are and what we've done.

LIFE magazine once interviewed dozens of people to learn how Americans feel about prayer. One person interviewed was a young prostitute from White Pine County, Nevada.

"I don't think about my feelings a lot," she said. "Instead I lie in my bed and think onto Him. I meditate because sometimes my words don't come out right. But He can find me. He can find what's inside of me just by listening to my thoughts. I ask Him to help me and keep me going. A lot of people think that working girls don't have any morals, any religion. But I do. I don't steal. I don't lie. The way I look at it, I'm not sinning. He's not going to judge me. I don't think God judges anybody."

Very few modern notions are more popular than the one that God judges no one. The problem is, however, that comforting perception is patently false!

Judgment is as certain as God is holy. The Psalmist says in Psalm 7:11, "God is angry with the wicked every day." In other words, as Dr. George Sweeting of Moody Bible Institute puts it: "God never makes détente with sin." The apostle Paul explicitly warned: "Be not deceived; God is not mocked: for whatsoever a man soweth, that shall he also reap. For he that soweth to the flesh shall of the flesh reap corruption; but he that soweth to the Spirit shall of the Spirit reap life everlasting" (Galatians 6:7-8).

Upon proper reflection of our faults and failures, such should cause every person to tremble, because it doesn't require a host of sins to condemn and bar us from paradise. As it was for Adam and Eve, it only requires one – just one – one single act of disobedience to God's law. Yet the records will reveal that all have failed miserably.

That is – unless the records are bought up and put away to never be played. Essentially, this is what Christ did when He gave his life as atonement for sin on the Cross. He bought up all the records and forever put them away for everyone who trusts Him for forgiveness and receives Him as Lord.

My mother will tell you that nothing she sought after before – riches, fame, success, etc. – could ever compare to the new life she found in Christ. Furthermore, let me say if she hadn't made that decision, I would have never known the grace and goodness of Christ...and certainly wouldn't be writing about Him for this editorial.

The article by Dr. Creech was written and published by The Christian Post in 2006.