Rev. Mark H. Creech
'None so blind as those who will not see' 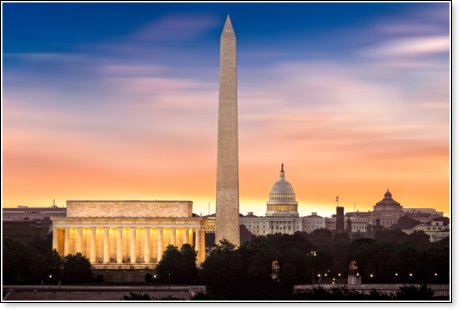 You have heard the phrase "There are none so blind as those who will not see." The expression is not in the Bible, but Jesus did state the principle when he said in Matthew 13:13 that he spoke to the people in parables "because seeing they see not, and hearing they hear not."

Earlier this month, when that damnable piece of legislation "The Equality Act" was taken up in the U.S. House, Rep. Greg Steube (R-Fla.) directed his fellow congressmen to consider the Word of God on the issue. To which far-Left radical Rep. Jerry Nadler (D-NY) arrogantly replied, "What any religious tradition describes as God's will is no concern of this Congress."

Ohh, there are none so blind as those who will not see.

Nadler has been serving in Washington since 1992, which is just one year shy of 30 years. During all this time, he surely could see the varied official evidence of enduring faith in God by our government.

If God's will is of no concern to Congress, why do the House and Senate start each session with a prayer?

Why does the phrase "In God We Trust" appear in both the Senate and House chambers?

Why is there a small room in the Capitol reserved explicitly as a place for congressional members to pray  a room with a stained glass window depicting our first President, George Washington, kneeling in prayer?

Why is there a painting in the Capitol's rotunda that features the Pilgrims ready to embark on the Mayflower's sister ship, the Speedwell, and showing the ship's chaplain with a Bible open on his lap? On the Bible's page is written, "The New Testament according to our Lord and Savior, Jesus Christ." On the ship's sail is the Pilgrims' motto, "In God We Trust, God With Us." Why is this?

Why is Moses holding the Ten Commandments included as a part of that great marble structure on the front of the Supreme Court building? When the crier opens and closes the High Court's proceedings, he always says, "God save the United States and this Honorable Court"? If the Supreme Court hopes for God's salvation, does that mean that the other government branches don't desire the same?

Why is there engraved atop the Washington Monument the phrase "Praise Be to God"? Why is the stairwell of that famous American edifice lined with biblical sayings such as "Search the Scriptures," "Holiness to the Lord," and "Train up a child in the way he should go, and when he is old he will not depart from it."

Why are there numerous biblical quotations on the walls of the Library of Congress? One of them reads, "The light shines in the darkness, and the darkness has not overcome it." Why would such a verse of Scripture, one that references the light of Christ himself, be enshrined in such a place except to remind the generations from whence true knowledge and direction are forever found?

At the Lincoln Memorial, inscribed upon the walls are the words of that man who kept our Union as a nation together: "That this nation, under God, shall have a new birth of freedom, and that government of the people, by the people, for the people, shall not perish from the earth." On the north wall, we read Lincoln's second inaugural address, which speaks of "God," the "Bible," God's "providence," "the Almighty," and "divine attributes." Was Lincoln saying God's will should be of concern to Congress, as well as the rest of the nation? 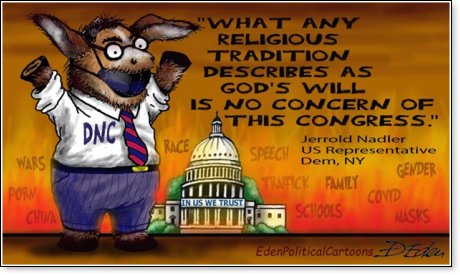 On the Jefferson Memorial's walls, there is a dire warning from Jefferson himself: "God who gave us life gave us liberty. Can the liberties of a nation be secure when we have removed the conviction that these liberties are the gift of God? Indeed, I tremble for my country when I reflect that God is just, that his justice cannot sleep forever." Was Jefferson saying that if we remove God from the way we govern, it will destroy the country?

If it is correct, as Nadler claims, that what any religious tradition describes as God's will is of no concern to Congress, why then are there so many messages displayed prominently throughout the nation's Capital saying precisely the opposite?

What I have written here is nothing new. Others before me have pointed out the same over and over again. The answer is as plain as a pikestaff, as clear as crystal, for anyone willing to consider the matter honestly.

Ahh, but obviously, it's still true: none are so blind as those who will not see.