January 6, 2010
The logical conclusion is that there is SOMETHING on the document that Obama does not want to share with the American people. Even the Beckster should realize that!

Glenn Beck is an Obama critic, but he's not a "birther" and ridicules "birthers" as the dumbest of the dumb and even helpful to Obama. "Radio Patriot" Andrea Shea King, a "birther," knows better. 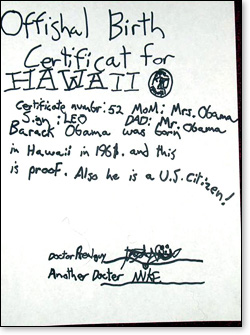 "On the air today, popular radio host Glenn Beck mocked 'birthers' and claimed there is a concerted campaign to get those questioning Barack Obama's constitutional eligibility onto the airwaves  a strategy Beck said would actually benefit Obama.

"'There's always games being played behind the scenes at a talk radio show,' Beck said. 'Rush has always called them seminar callers. But instead of being coy with the seminar callers or with you, I'm just going to expose the game that is going on. Today there is a concerted effort on all radio stations to get birthers on the air.'

"'I have to tell you, are you working for the Barack Obama administration?' Beck scoffed. 'I mean, that's the dumbest thing I've ever heard.'"

This morning on "Fox & Friends" there was a report that President Franklin Delano Roosevelt really died of a brain tumor, not a stroke, and his brain tumor was concealed for political purposes.

What strikes some (or even most) as unbelievable (or "dumb") may be true.

Beck calls radical Obamaton and ACORN 8 leader his "Rosa Parks," so his own capacity for "dumbness" is not in doubt.

Beck just proved that again this year by joining the big dog at Fox News, Bill O'Reilly, in mocking the "birthers."

I don't know where Obama was born, but I believe that "birthers" are right to respect the United States Constitution and demand proof that Obama is eligible to be President and the burden of proof on that issue belongs on Obama.

In 2008 John McCain quickly produced his birth certificate, but Obama still has not done so.

Obama's refusal to produce his birth certificate is NOT proof that he was born in Kenya, but it IS a strong sign that he's hiding SOMETHING.

"The ongoing dialogue then spun off into ridicule as Beck caricatured those who question the sitting president's eligibility with straw-man arguments reminiscent of jibes made by Obama's apologists in other news outlets.

"Beck defined birthers as people who believe Obama was born in Kenya or other foreign country, was raised as a Manchurian candidate and somehow brainwashed Hillary Clinton into not exposing his fraud. According to Beck's running joke, birthers believe someone  maybe Obama's KGB 'control'  preemptively placed Obama's birth announcement in 1961 Hawaiian newspapers with a 'roadmap' of getting an African man into office.

"As for Obama producing a long-form birth certificate to actually prove his place of birth, Beck questioned, 'Why do that when these people ["birthers"] are so discrediting themselves?'"

But, as Zahn put it: "The 'certification of live birth' posted online and widely touted as 'Obama's birth certificate' does not in any way prove he was born in Hawaii, since the same 'short-form' document is easily obtainable for children not born in Hawaii. The true 'long-form" birth certificate  which includes information such as the name of the birth hospital and attending physician  is the only document that can prove Obama was born in Hawaii, but to date he has not permitted its release for public or press scrutiny."

Scrutiny of Obama (in sharp contrast to Sarah Palin) is something that the liberal media establishment avoided and Fox News did not do nearly well enough.

Perhaps Beck and O'Reilly mock the "birthers" because they too would be embarrassed if the true "long form" birth certificate were made public and contained any significant information that would bear on either Obama's eligibility or suitability to be President of the United States. (It was not until long after Obama was inaugurated that those two Fox News hosts focused on The New York Times killing an Obama/ACORN expose on October 21, 2008, even though I reported it on the Internet the next day.)

"The radio host further argued that by distracting the public from actionable issues, 'birthers' have become 'a dream come true' for Obama, an ideal situation akin to the fantasies of adolescent boys after Hollywood bombshells.

"'Barack Obama looks at the birthers as Megan Fox,' Beck said, referring to the star and sex symbol of the popular 'Transformers' films."

Message to Beck: As a faithful student of community organizer Saul Alinsky, Obama has followed his rules for radicals. Like a faithful Alinskyite, you too ridicule the "birthers." But ridicule is not a substitute for Obama's original birth certificate.

"'Birthers'...reflect a far greater diversity of opinion than is assumed by Beck's characterization. For example, while the term has been applied to anyone questioning Obama's eligibility to serve as president under the Constitution's 'natural born citizen' clause, many 'birthers' don't doubt Obama's Hawaiian birth, but instead take issue with his father's foreign citizenship.

"While other top radio hosts, including Rush Limbaugh, Sean Hannity, Michael Savage, Mark Levin and Lou Dobbs, have all said unequivocally and publicly that the Obama eligibility issue is legitimate and worthy, a few  including Beck and fellow Fox TV host Bill O'Reilly  have taken the position that the issue is, in O'Reilly's words, 'bogus.' Both Beck and O'Reilly cite the contemporaneous appearance of birth announcements in two Honolulu newspapers as prima facie evidence Obama was born in Hawaii and 'birthers' are conspiracy nuts.

"However, what neither talk host realizes is that newspaper birth announcements are not placed by parents phoning their local paper with the good news that they had a child. Rather, as WND has reported based on interviews with the two Hawaii papers involved, the Obama newspaper birth announcements stemmed from information automatically sent to the papers by Hawaii's Department of Health upon the state's issuance of a 'Certification of Live Birth,' which, as WND has also reported, is considered insufficient on its own to positively document the president's birthplace.

"Many people remain unaware that a child does not even have to be born in Hawaii to receive a 'Certification of Live Birth  that's the 'short form' that provides no hospital name, delivering physician or any of the other information that traditionally appears on a legitimate birth certificate. And yet the 'short form' COLB is the one and only piece of evidence the White House has cited in defending its assertion Obama was born in Hawaii.

"Hawaiian law specifically allows 'an adult or the legal parents of a minor child' to apply to the health department and, upon unspecified proof, be given the birth document.

"And since Obama's long-form birth certificate remains locked away from public view and sealed by privacy laws, no brainwashing device  such as Beck alluded to in his program  would be necessary to keep Hillary Clinton from discovering the contents of Obama's original birth certificate."

The logical conclusion is that there is SOMETHING in the document that Obama does not want to share with the American people.

Even the Beckster should realize that!

Zahn pointed out that concealment is the Obama way.

"Obama's birth papers...aren't the only piece of the sitting president's past that Obama has refused to reveal.

Who really thinks there's nothing there that might reasonably influence voters if known?

Beck, who last year publicly stated that Obama is racist, now wants to challenge Obama only on his policies and actions.

First, most Obama/ACORN critics can multitask!

Second, we need to expose the truth about the Obama/ACORN relationship that helps explain why Obama appointed all those "czars."

Third, Marcel Reid is an ardent Obama supporter with personal and radical political agendas and not a "Rosa Parks.

"What toute la monde is chewing dishtowels about this morning ranges from 'Sarah's a birther!' to 'It's a reasonable question'. But it's one that the mainstream media won't  can't  touch with a ten foot pole.

"As my show producer Dave said, they're in quandary  "They can't take this opportunity to smash Palin once again for fear of reporting on the birth certificate story. They've got the club in their hand but they can't use it."

"Pinch is half insane this morning. If Palin had come out and said 'I believe in flying saucers', they'd report that in a hot second, but they can't touch this  you know they're banging their heads on the edge of their desks. They can't write this story  cannot take this opportunity to smash Palin. This birth certificate/eligibility issue is a no-fly zone.

"And they like to paint her as stupid? I'm laughing out loud. Dumb like a fox. She's placed this issue squarely on the front page of controversy. Where it needs to be."

"Anyone who has read my blogs or tuned in to my radio program knows I've been asking 'who the heck is Barack Hussein Obama' ever since he first appeared on the national radar screen. And here's why:

"What we DO know about BHO:

"But someone knows who he is.

"But we're disparaged as 'Birthers' by hypocrites who 'won't go there', yet still ask why it is we know so little about Obama; Conspiracy Freaks by those who are simply ignorant of the facts; and 'Trolls"' by self-appointed 'betters' simply for asking.

The day after graduating, Gaynor joined the Fulton firm, where he focused on litigation and corporate law. In 1997 Gaynor and Emily Bass formed Gaynor & Bass and then conducted a general legal practice, emphasizing litigation, and represented corporations, individuals and a New York City labor union. Notably, Gaynor & Bass prevailed in the Second Circuit in a seminal copyright infringement case, Tasini v. New York Times, against newspaper and magazine publishers and Lexis-Nexis. The U.S. Supreme Court affirmed, 7 to 2, holding that the copyrights of freelance writers had been infringed when their work was put online without permission or compensation.

Gaynor currently contributes regularly to www.MichNews.com, www.RenewAmerica.com, www.WebCommentary.com, www.PostChronicle.com and www.therealitycheck.org and has contributed to many other websites. He has written extensively on political and religious issues, notably the Terry Schiavo case, the Duke "no rape" case, ACORN and canon law, and appeared as a guest on television and radio. He was acknowledged in Until Proven Innocent, by Stuart Taylor and KC Johnson, and Culture of Corruption, by Michelle Malkin. He appeared on "Your World With Cavuto" to promote an eBay boycott that he initiated and "The World Over With Raymond Arroyo" (EWTN) to discuss the legal implications of the Schiavo case. On October 22, 2008, Gaynor was the first to report that The New York Times had killed an Obama/ACORN expose on which a Times reporter had been working with ACORN whistleblower Anita MonCrief.

February 7, 2021
How much longer will the persecution of Donald Trump continue?

January 15, 2021
The Impeachment of President Trump is the Real Abuse of Power

January 8, 2021
Should Attorney Rudy Giuliani be disbarred for outrageous behavior?

October 8, 2020
God bless and protect Mike Pence and save the United States from lawyers like Kamala Harris

September 23, 2020
Voters, ACORN whistleblower Anita MonCrief is documenting for you the radical left agenda in time for you to stop it