Food and Drug Administration (FDA) Commissioner Margaret A. Hamburg says "some very explicit, almost gruesome pictures may be necessary" on cigarette labels. The FDA is concerned about serious medical consequences of smoking, such as cancer, heart disease and strokes — and for good reason. Cigarettes have proved deadly. The images are part of a new campaign launched by the FDA and the Department of Health and Human Services in response to the 443,000 deaths per year caused by cigarette smoking. 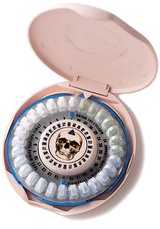 Shouldn't the same standards and cautions be applied to warning labels to alert women about diseases caused by "the pill" and all other forms of harmful hormonal contraception? After all, these deadly hormones are placed in the same category as cigarettes and asbestos by the International Agency for Research for Cancer, a research arm of the World Health Organization. According to this same research arm, any form of estrogen-progestin-combination birth control — including the pill, the patch, Depo-Provera, Norplant, Ortho Evra patch or any others on the market — can increase risk for breast, cervical and liver cancer.

Young corpses in coffins, emaciated cancer patients and college-age stroke victims are among the graphic images the FDA should mandate on the pill and all hormonal-birth-control prescriptions if it is to be consistent with its own warning practices, especially given the upcoming mandate on all cigarette packs.

The medical evidence is daunting. Recent studies indicate that any woman who takes the pill for four years before her first full-term pregnancy increases her risk of breast cancer by 52 percent. The Journal of the American Medical Association recently confirmed that the hormones given to women in menopause have been found to cause deadly breast cancer.

However, it stopped short of saying that the same hormones are also given to women and young girls in the form of the pill — only the doses are much higher. According to the Surveillance, Epidemiology, and End Results data at the National Cancer Institute, the inconvenient truth is that there has been a 400 percent increase in noninvasive in situ breast cancer in premenopausal women since 1975. It's also a nondiscriminatory disease. Breast cancer is now listed as the No. 1 cause of cancer death among Hispanic women and the No. 2 cause of death among white, black, Asian Pacific and American Indian/Alaska native women. That certainly begins to make me hum a tune from my childhood, "You've come a long way baby, to get where you got to today ... you've got your own cigarette now, baby, you've come a long, long way."

Shouldn't women — and parents of young girls — be alerted? Isn't it time to ask if the pill and other forms of hormonal contraception are a prescription for breast cancer? The parallel paths between cigarettes and the pill are downright scary. The fact is that experts were aware of the health dangers of cigarettes long before they pierced through to the general public. It took six decades for the physical effects and the voluminous numbers of lawsuits to catch up with the multibillion-dollar industry that profited from the pain and suffering of those they targeted in their heavy advertising campaigns. Finally, in the interest of health and safety, cigarette ads were driven off the airways.

It is uncanny that our nation has just entered its sixth decade of the pill. Who among our health, legal and political leaders will have the courage to sound the alarm bells this time around? It's popular to oppose cigarette ads, and those who participate in the Great American Smokeout are admired. Will this be the case with the pill? Those brave enough to recognize its link to deadly cancer will risk relentless ridicule from the deniers within the feminist movement and the industries that stand to lose billions of dollars by its exposure.

It's time for hormonal-birth-control ads to be questioned and for champions of women's health to speak up. Legislators should call for public hearings to evaluate the content of these ads. And the FDA needs to wake up and realize that women should be warned about more than cigarettes. We deserve to know the truth before we, too, find ourselves pictured on one of its warning labels.

For more information or to register for "50 Years of The Pill: A comprehensive analysis" at the Hyatt on Capitol Hill December 3, 2010 visit www.hliamerica.org