August 15, 2018
There are few books that I have ever read in a single sitting. Tabitha Lavender's very personal story of her healing and recovery from years of emotional and spiritual suffering in the aftermath of her three abortions is one of them.

Forgiven is one woman's story of how she overcame years of rejection, blame, rationalization and denial to achieve hope, healing and forgiveness by turning her life and her will over to the care of God as she understands him.

Her book runs barely 100 pages, but its gripping narrative and its message of hope and healing is what makes it so compelling. That plus the fact that it deals courageously with what society still refuses to accept as the greatest single source of human suffering that humanity has ever endured. 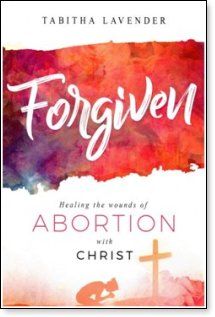 Consider the numbers. In the U.S alone, there have been more than 61 million abortions over the last 50 years – profoundly affecting the lives of over 30 million women. At least 70 per cent of them have suffered long-term emotional, spiritual, and often even physical trauma. Plus millions of men who were involved in their abortions. Alcoholism and drug addiction affect far fewer lives.

Worldwide, the abortion toll is more like 2 billion! All the industrial wars of the 20th century have not taken so large a toll. Yet the world remains largely in denial about it.

Tabitha Lavender opens a window into the life of one woman – from her initial denial that abortion was anything more than just another medical procedure to her acceptance of it as a solution to her rejection by the men in her life as soon as they learned she had become pregnant. All leading to a profound distrust of men generally.

Her long path to recovery began with her recognition of the physical, emotional and spiritual wounding that abortion causes. "My mind returned to my time on the table, the long scream that I released, and the crying, the hurt, and the pain."

More common are the emotional problems: Deep depression lasting 40 years or more in some cases. Plus feelings that future inability to conceive is punishment for an earlier abortion. Some walk the path of promiscuity, seeking out sexual intimacy to soothe their pain. Others descend into drugs and alcohol to numb the shame and the guilt.

Tabitha chose the path of denial – stuffing her emotions "into other areas of my life where I simply had cut off emotions. The poison showed up as perpetual anger, sometimes rage. . . I had very deep feelings about the abortions that I had buried inside myself, and those feelings had to go somewhere."

In fact, her anger may have been a defense against even deeper feelings of hurt from what she calls "wounds from before" – wounds that set her up to seek love in all the wrong places. The big one was rejection by her birth father, who was part of the "baby daddy" phenomenon that grew out of the sexual revolution. He had dated her mother, then married someone else, and then returned to try to have both.

"My father never wanted me. He was never a father who was present. These thoughts shaped the kind of love that I went after. . . I was always trying to make some guy like me. The babies I aborted became the casualties of that dusty, broken, worn-out love."

Her slow recovery began with the kind of self-honesty that is the key to healing so many other forms of addictive behavior, a fact discovered many years before by 12-Step programs like Alcoholics Anonymous.

She found strength by rediscovering her spiritual life. "Before Christ, I could not face the hurt. The hurt was so huge – like Goliath vs. David. If I ever let go and cried, I would have drowned in my tears. Now, however, it was clear – no more denying."

Among other things, she had to learn to forgive her father. "Forgiveness," she writes, "is an essential component of the healing process."

She compares the process to weeding. "If you only take part of a weed out, it looks like it is gone, but it will grow back and choke your harvest. So, like weeding, you must expose all the factors that the Lord shows you so that your wounds are healed at the root. For me, this included processing some very painful memories."

She goes on to explore all the feelings associated with her three abortions. First, there was hurt, disbelief, anger and then hatred. "I cried my guts out," she recalls.

With her second abortion came resignation, numbness, isolation, and then more screams and tears. And with the third came fear and a profound distrust that pushed away even well-intentioned offers of help and support.

Fortunately, God writes straight with crooked lines, and over time Tabitha found herself with a Master's degree in clinical psychology, marriage to a successful man, and by age 35, a stay-at-home mother of three sons, ages 2 to 10. She had also joined a women's Bible study group that challenged her beliefs about herself as a believing Christian.

That led to turning her life and her will over to the care of God as she understood him – which in her case was Jesus Christ Our Lord. This is akin to AA's famous Third Step.

She says, "God was transforming me through His Word. The changes to the naked eye were not dramatic at first – my husband will attest to that." However, even her kids began noticing the changes in her. Soon she became involved in pro-life work and began sharing her story with others seeking post-abortion healing.

She also achieved reconciliation with her birth father through mutual forgiveness and found the grace to forgive even the men who had occasioned her abortions. And that led to her resolve to share her story by writing this inspiring book.

Reading it, I was struck by the parallels with my own journey of 48 years in Alcoholics Anonymous. For the last 25 years, I have hoped and prayed for the development of a similar program for post-abortive men and women. This little100-page book may well be the seed for such a movement.

Today, there are such new beginnings with Life Anonymous and Abortion Anonymous groups starting up in states like Florida and Washington. Hopefully, Forgiven will become an important help to those in recovery.

These new beginnings hold promise of a genuine spiritual recovery that can go far to heal the national wound inflicted on our great country by the tragedy of abortion just as AA has helped heal the wounds inflicted by alcohol addiction.

Forgiven can also be an important resource for pastors and leaders in the pro-life and women's resource movement. I can't think of a more powerful followup for use by sidewalk and pregnancy center counselors than this book, which is rated 5 stars by almost every person who buys it on Amazon.

In keeping with the spirit of anonymity, Tabitha Lavender is a pen name for the real-life woman who wrote Forgiven from the depths of a repentant heart.

Forgiven by Tabitha Lavender on Amazon