December 7, 2008
A criminal without legal status deported by US immigration officials is the subject of the latest pity party thrown by The New York Times. The Times seems to find it lamentable that this gang member and armed robber was deported from "his homeland"  that would be the USA  to Cambodia, the land of his birth (one he left when he was a 3-year-old). Why does the NYTimes bemoan the deportation of this thug? Why would he make a fine American despite his criminal history? He can dance, man! 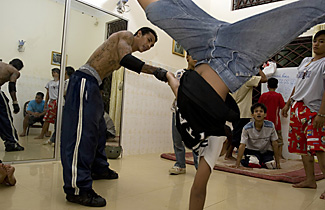 The Times waxed maudlin that their friend "K.K." was deported at 26-years of age ending up in Cambodia, a land with which he was quite unfamiliar. Apparently, the Times feels "K.K." is doing wonderful work there, though, by teaching Cambodian street kids how to street dance. Yes, despite that he is a "former gang member" and convicted felon, the Times thinks he's a swell fellow because he is bringing "a little slice of Long Beach, Calif." to street kids in Cambodia.

It is a little slice of Long Beach, Calif., brought here by a former gang member by way of a federal prison, an immigration jail and then expulsion four years ago from his homeland, the United States, to the homeland of his parents, Cambodia.

First of all, the USA isn't "his homeland" if he is neither a legal citizen, nor was born here!

The Times then informs us that he didn't want to go (and who can blame him?). So, deported he was but not because "he wants to be" the Times says.

K.K. is not here because he wants to be. He is one of 189 Cambodians who have been banished from the United States in the past six years under a law that mandates deportations for noncitizens who commit felonies. Hundreds more are on a waiting list for deportation. Like most of the others, K.K. is a noncitizen only by a technicality. He was not an illegal immigrant. He was a refugee from Cambodia's Khmer Rouge "killing fields" who found a haven in the United States in 1980.

Apparently "noncitizen by a technicality" is NYT speak for a criminal alien! And a real criminal, too, not just one of the low level illegal-entrant variety.

Like some children of poor immigrants, K.K. drifted to the streets, where he became a member of the Crips gang and a champion break dancer. It was only after he was convicted of armed robbery at 18 that he discovered that he was not a citizen.

So, it was America's fault he became a gang member? Naturally.

As it happened, when he was convicted for armed robbery, he discovered his parents never bothered to make him an official US citizen so it was off to Cambodia with him because of new, tougher laws that find non-citizens that get convicted of crimes deported to their real homeland.

That's right, to The New York Times, being a "champion break dancer" makes all that messy armed robbery and gang thuggery seem so much less important when auguring over who should be considered a useful member of our society. Gang member? Armed Robber? Pfft, who cares? This boy can DANCE, man!

Now, we can all agree that it is a good thing that Mr. Sobil seems to be making a difference for those street kids in Cambodia. It is also good that he feels that he's made a good life for himself there. I salute his turnaround. But, this one incident is no reason for the NYT to cast doubt on the deportation practice. How many of these criminals and thugs actually become useful members of any society? Didn't we already give these criminals a chance at a life here by offering a path to citizenship IF they stay law-abiding folks?

And what would the Times have us do? Just make a citizen of every murderer, thug and gang member that falls into this deportation situation just on the off chance that one will turn out to be a good dancer like K.K.?

Amazingly, the Times just can't seem to understand why we wouldn't want a gang member and armed robber to be allowed to attain instant citizenship in the United States.

And the NYT wonders why Americans just don't consider the paper an American institution anymore.

Be sure and Visit my Home blog Publius' Forum. It's what's happening NOW!