Peter Lemiska
Thespian politicians and the insurrection that never was 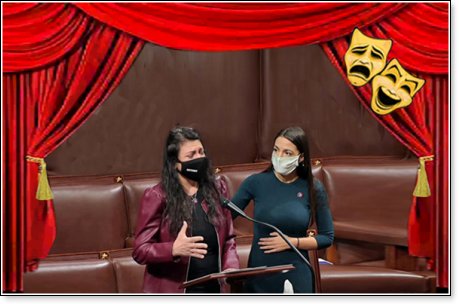 With the second impeachment of former President Donald Trump well underway, attention has returned to last months riot at the Capitol. While most Americans condemned the incident, Democrats saw it as a golden opportunity. They labeled it an insurrection, pinned it on President Trump, and immediately started working on his second impeachment. The hyperbolic label made sense, in a perverse way. If youre going to accuse a president of fomenting violence, rightly or wrongly, using the word insurrection has a lot more impact than riot. It suggests a rebellion against our republic, against everything America stands for. Besides, that term is the same verbiage that appears in section 3 of the 14th Amendment, which prohibits any person who has engaged in insurrection against the United States from ever holding any public office.

There is ample evidence refuting the claim that President Trump incited the riot on that fateful day, that the melee had actually been planned well before, and that countless Democrats had been spewing far more incendiary rhetoric throughout Trumps presidency.

But what about the so-called insurrection?

Title 18, Section 2383 of the U.S. Code reads as follows: Whoever incites, sets on foot, assists, or engages in any rebellion or insurrection against the authority of the United States or the laws thereof, or gives aid or comfort thereto, shall be fined under this title or imprisoned not more than ten years, or both; and shall be incapable of holding any office under the United States. Fortunately for the Democrats, the statute doesnt really provide a precise definition of insurrection.

Most of us have always thought of an insurrection as a determined effort to overthrow a legitimate government using violence. We associate the word with an exchange of gunfire, wanton bloodshed, and mass casualties. We envision the removal of government officials and the establishing of some sort of provisional government, organized by rebel leaders.

Merriam-Websters Law Dictionary defines insurrection as the act or an instance of revolting, especially violently, against civil or political authority or against an established government.

Various definitions of the word are all pretty broad, but the criminal statute and most legal definitions of insurrection talk about revolution or rebellion. Theres absolutely nothing to suggest that the rioters that day were revolutionaries. There were some right-wing extremists, but most were simply passionate, angry patriots  yes, patriots. Many had proudly served their country in uniform or in other ways. But they were frustrated by a government that was ignoring them. They were demanding answers to the many voting irregularities that occurred in the last election. They wanted to know how state election laws could be illegally and haphazardly changed at the 11th hour of an election. They were demanding accountability from the people they put into office.

None of our lawmakers were injured in that incident at the Capitol, and there were no plans, contrary to what some have claimed, to kidnap elected officials or seize control of our government. Only one weapon was discharged  directed at the rioters. And though five people tragically died that day, there were no mass casualties. There was the unarmed participant shot by a panicked law enforcement officer. One officer was reportedly struck in the head and subsequently died. One participant died of a heart attack, one had a stroke, and one was trampled by the mob.

And theres something else that suggests this was nothing more than an ugly riot. Many of those insurrectionists have since been arrested and are now facing charges  but not charges of insurrection. Instead, theyre facing such mundane accusations as remaining in a restricted area, disorderly conduct, and theft of property. The more serious charges include assault on a police officer and carrying a pistol without a license.

When the police-hating Marxist group Black Lives Matter seized control of a section of Seattle, that could have been called an insurrection, but Democrats said nothing. And when the same group engaged in violent, anti-establishment riots, resulting in scores of deaths and more than a billion dollars in damage, Democrats labeled them peaceful protests. Now, in a determined effort to deny Trump any future role in politics, theyve chosen to impeach him as an insurrectionist – a threat to our democracy. What they lack in facts they make up for in drama.

Theyre hoping to influence public opinion with carefully selected video clips, gut-wrenching performances, and endless anecdotes – some embellished, and some completely fabricated, like the hair-raising tale of distress told by Alexandria Ocasio-Cortez. Their public performances, which ranged from maudlin to histrionic, only showed that theyre no better at acting than they are at legislating.

The incident on January 6th was no insurrection. It was a manifestation of the seething anger and utter frustration felt by tens of millions of Americans who see growing corruption and abuses of power in our government, who see America slipping away. Those who invaded the Capitol were simply among the most passionate, the most impulsive. Vast numbers of sympathizers support their beliefs; theyre just not yet ready to embrace their methods.

Rather than working to resolve the issues dividing America, Democrats are making a disastrous mistake, believing they can quell the simmering rage in America with more lies and kabuki theater.