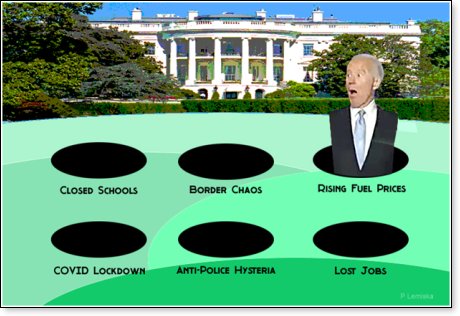 Joe Biden is a man whos spent nearly 50 years in public office, but as president, hes suddenly become quiet and elusive, a man of few words.

More than 400 years ago, Shakespeare wrote: Men of few words are the best men, and today we equate the term with the strong, silent type of hero often portrayed in filmcourageous and determined, invariably soft-spoken, but extremely effective. They are classic movie personas like Shane, Dirty Harry, Indiana Jones, and of course, BondJames Bond.

Even though BidenJoe Bidendoesnt have much to say these days, he doesnt bear the slightest resemblance to any of those characters.

It must be frustrating for the media, watching him suddenly disappear after reading a prepared statement, then pop up somewhere else reading another statementonly to vanish again just as quickly.

While the country is still reeling from a global pandemic that has devastated our economy, our education system, and our society at large, Biden is in hiding. And now, confronted with a tidal wave of immigrants rushing through our southern border, a catastrophe of his own making, our president continues to play whack-a-mole with the press.

His evasiveness has provided an endless source of criticism for his political opponents. Now, honest Americans on both sides of the aisle are beginning to take notice, as his supporters are running out of excuses for him. His press secretary says historic crises, including the COVID-19 pandemic, have kept him from holding press conferences. One of Bidens staunchest supporters, Rep. Jim Clyburn, parroted that absurd explanation, recently protesting, " Were busy doing other things right now." Realizing how dismissive that sounded, the congressman quickly added, "We aren't here just to satisfy the media. Were here to satisfy the American people."

What Clyburn doesnt seem to understand is that the media exist to represent the people, to hold elected officials accountable for their actions.

Dictators and tyrants dont do press conferences. They dont need to explain anything to the people they rule. Thats not the case for American Presidents; and if this one persists in squirreling himself away, hell need a better explanation than Im too busy.

In free countries, there are really only three reasons why a public official might evade media scrutiny:

Although elected by the people and answerable to them, he can abuse the power entrusted to him. If he thinks he can get away with it, and the media acquiesce, he may choose to simply ignore the press.

It seems simple enough. If his policies are unmitigated disasters, why would he expose himself to scrutiny by the press and public humiliation?

Citing his non-stop gaffes and verbal, as well as physical stumbles, many of his critics suggest thats why Biden has become so evasive. Theyre convinced that hes suffering from some affliction that diminishes his reasoning or cognitive functions.

There may be a combination of factors explaining Bidens disappearing act. He has, after all, shown utter disregard for public opinion by unilaterally signing, at last count, 74 Executive Orders or other presidential actions in the two months hes been in office. Some of those were innocuous, but many have had a profound impact on our country. His contempt for accountability was also made clear when he shut off the flow of information from authorities on our chaotic southern border.

Whatever his reason, Americans should be deeply concerned by Bidens lack of transparency.

Yes, he has submitted to occasional interviews by friendly, accommodating news personalities, but those interviews are better suited for celebrity magazines. They havent seriously challenged his policies, nor have they assuaged the concerns of the American people.

But the blackout curtains at the White House may soon open, just a crack. Under mounting pressure, the administration has announced that Biden will hold his first formal press conference on March 25th.

During that event, the public will be scrutinizing the press, as well as the president. If the media engage this president with a fraction of the pit-bull-aggression they directed against President Trump, maybe they can recover some of the public trust they lost over the past several years. But if they acquiesce to specified conditions, like pre-selected questioners or pre-screened questions, theyll only be helping the administration spread its propaganda.

One press conference wont resolve the monumental problems now plaguing our nation, but if those guardians of freedom do their job, they may shed some light on the ill-conceived, radical policies that created them.

Now wheres that constitutionally mandated state of the union address?