Peter Lemiska
Poisoning the minds of future generations with CRT 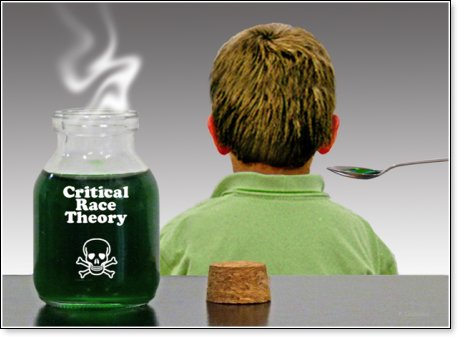 It seems that liberals have again come up with another cure for the ills of society. They see critical race theory (CRT) as the elixir needed to treat Americans suffering from an acute ailment, one they didnt even know they had – incurable systemic racism.

By the turn of the 21st century, most people believed the racial divide in America was finally healing. The race riots of the 1960s had ended decades earlier, and thanks to the Civil Rights Act, school busing, quota systems, and affirmative action programs, black Americans had been integrated throughout every facet of our society. In September 2001, lingering concerns of racism evaporated in the wake of a vicious attack on our nation, one that left Americans of all races united against a common enemy.

Then in 2008, America elected its first bi-racial president, a gifted young man brimming with enthusiasm, a man who promised a color-blind future for America. That would surely heal any remnants of racial division. Or so we thought. But voters had ignored some troubling signs. There were the years that future president spent listening to racist, anti-American rhetoric, spewed by a radical preacher. And there was his wifes public proclamation that she had never before been proud of her country.

Once in office, Barack Obama wasted no time revealing the biases he was taught by a rogues gallery of anti-American influences. Just a few months after his inauguration, a black Harvard University professor was arrested outside his home. Obama quickly injected his bias into the situation, proclaiming that the police had acted stupidly.

That was followed by more serious incidents. Several African-Americans died at the hands of police, sometimes under questionable circumstances. Regardless of debatable police actions – what they did or didnt do – there was never a shred of evidence that any of those deaths were racially motivated. There were no racist epithets exchanged during the confrontations and no history of racial animus by those involved.

Travon Martin, a young black man, was the first, although his death did not involve police. Soon after, Obama issued a statement indicting systemic racism, police policies, and our justice system. He explained that Travon could have been his son  could have been him 35 years ago. He went on to talk about widespread suspicion of the African-American community just as if it were still 1965.

After each death, Obama jumped in to nurture the growing notion that systemic racism and discriminatory police practices were the cause.

He used those deaths to infuse his own notion of endemic racism into a society that had long ago rejected that idea. And he did it effectively. Polling data shows that race relations deteriorated quickly and dramatically during his administration.

Obama, and all those who see underlying racism wherever they look, fail to understand some simple truths. We live in a society that is often lawless, and sometimes violent, a society that is thoroughly integrated. Tasked with keeping the peace, police regularly interact with people of all races with unpredictable results. Those who instinctively blame all interracial confrontations on racism need to look in the mirror and reflect on their own biases.

While CRT has been around since the 1990s, virtually no one heard the term during Obamas presidency. Obama didnt invent CRT, but as a college student, he proudly endorsed the work of Derreck Bell, one of its pioneers. Obamas eight years in office conditioned the public to accept the concept of systemic racism in America, though, and helped make CRT acceptable today.

Like all theories, CRT is just an idea, an unproven hypothesis. It argues that, like original sin, all whites are born inherently biased against blacks, and that they must accept that notion. But if inherent racism exists, shouldnt it be universal? If one race is inherently biased against another, shouldnt it work the other way around? If whites are saddled with enduring guilt stemming from our racist past, shouldnt African-Americans still harbor feelings of anger and resentment? Should that concept also be taught to our children?

Wouldnt it be better to teach them the truth – that systemic racism no longer exists, that in todays society, race is no impediment, and that racial hatred is a truly rare anomaly? Would that not be a better pathway to racial harmony?

Most of us who have seen images of black and white children playing together understand that racial animus is not innate; its learned. Attitudes on race can be shaped by people like Barack Obamas mentor, Jeremiah Wright – angry, bitter people who cling to Americas racist past. Or they can be molded by fair-minded, unbiased, and optimistic people, like the parent who recently spoke out against CRT in a viral video. That young black man is teaching his child that we are all masters of our destiny, and that skin color doesnt matter in America. They offered perhaps the best ever argument against CRT.

But today, Joe Biden cant stop talking about systemic racism. Considering his own racist past, its doubtful that he believes in CRT, or even understands it. But like a hungry amoeba, he simply absorbs the cause du jour, and that becomes his new value system. Now hes pushing hard to include CRT training in our schools and government institutions.

Obama recently said that Joe Biden is finishing the job begun in his administration. Considering the damage to race relations caused by their administration, thats nothing to crow about.