November 4, 2009
This was classic. About a thousand enthusiastic patriots showed up for our rally in Fort Collins, CO. They loved my performance singing my "Tea Party Anthem" and "2010." Fans of my articles on the internet were also in the crowd. Some drove hours to meet me. I signed numerous autographs and posed for pictures with my patriot brothers and sisters. 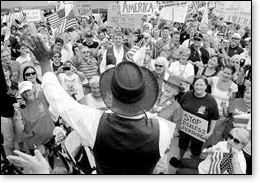 A white guy approached me and said, "You're the only black here (which was not true). Why don't you come to our democrat rallies where there are many blacks and more tolerant people." I could not respond because I was due back on stage.

If I had time, I would have said, "No thanks. I don't want to hang out with a bunch of brainwashed blacks convinced by liberal democrats that they are victims." And what the heck did this guy mean by "more tolerant people"? This is my second tour traveling across America on the Tea Party Express. At every rally, the mostly white audiences embrace me, a black man, as a brother. Why? Because unlike the liberals who think everything is about race, the American people care about shared values and principles.

I am so sick of the Left getting away with branding us Conservatives "intolerant." Talk about the pot calling the kettle black, the Left is totally intolerant of opposing thought.

I recently received an email from the father of Kristen Campbell. Kristen is a high school student whose article disagreeing with Mrs. Obama was published in her school newspaper. Outrageously, this brilliant student was physically attacked with a knife and verbally abused by many in her community. To her credit, this courageous kid stood by her article.

Books! During this first week and a half of the Tea Party Express tour, several first time authors have honored me with copies of their self published books. Their motivations were the same. "I was feeling frustrated with the way our country is going and wanted to do something!" Folks, I LOVE the fact people across America are contributing to the movement in their own ways; totally passion and concern driven grassroots.

Interesting point. A few blacks are in attendance at every rally. Every black I have chatted with is retired military. They have fought for and served our country. They have traveled and lived abroad. They love America, realize its unique greatest and do not want to see it changed. It was truly refreshing speaking with fellow blacks uninfected with the Lefts' "America Sucks/ Blacks Are Victims" disease.

For the grand finale of the Fort Collins, CO rally, our team sang "God Bless the USA." Earlier while mingling in crowd, I met a German guy who told me he was a new American. He said taking the oath of citizenship was very moving. I shared his story with the audience and invited the new proud American on stage as we sang, "...and I'm proud to be an American, where at least I know I'm free. And I won't forget the men who died, who gave that right to me. And I gladly stand up, next to you and defend her still today. Cause there ain't no doubt I love this land...God Bless the USA!"