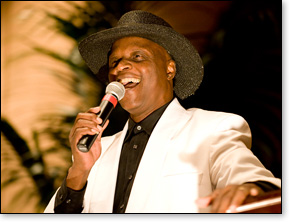 Tammy Bruce delivered a great speech. Ten years ago, Bruce was a hardcore liberal democrat activist. Similar to Saul on the road to Damascus, Bruce saw the light that Conservatism is best for all people, especially minorities. As a black conservative escapee from the Liberal Plantation, I say to Bruce, "Right on sista!"

Another compelling statement from Bruce, the former liberal zealot, "Liberals exploit the turn-the-other-cheek Christian principle of conservatives." For years, liberals have screamed, yelled and protested their way to successfully furthering their "dismantling of our traditions and values" agenda with no real opposition from conservatives. Finally, via the tea parties, conservatives are fighting back. Not knowing how to deal with the new brand of conservatives, "Liberals are afraid, very afraid", says Bruce. (TammyBruce.com)

Sometimes God gives us great gifts in ugly packages. The day after Obama was elected, I could have been extremely depressed. The only thing that gave me peace was the knowledge that God is in control. God did not wake up that morning and say, "Oh no, Obama won!" So, I trusted that all was well.

Obama's election has proven to be a great gift from God. Obama's radial, progressive and socialist agenda has awakened a sleeping giant. For years, we regular folk Americans have been passively going along with political correctness; the banning of God from the public square, attacks on our freedoms, culture and etc. Finally, millions of Americans, in ever increasing numbers, are saying, "ENOUGH! We're taking back our country!"

Desperate, Obama and his sycophant media buddies have been trying to silence the opposition by despicably calling millions of decent hard working Americans, racist. Well, it ain't workin'!

The patriot banquet was held at the beautiful Scottsdale Plaza Resort (spread out over 42 acres). I had the pleasure of chatting with the resort owner, seated at my table, John Dawson; an amazing down to earth man. Talk about the American dream, Dawson started from nothing. Several of his employees, Hispanics, Blacks, Whites and etc., have been with him over 20 years; they're family.

The patriot banquet organizers were the same as I have witnessed across America, first time, extremely passionate and committed political activists; part of this incredible phenomenon known as the American Tea Party Movement.

In attendance were tea party patriots, all contributing in their own way; following their passions and using their skills, gifts and talents to help restore America. One such patriot is Brad Zinn who by trade is a professional comedian; but for his country, travels America lecturing on the evils of Communism and Marxism. (Greatcomedians.net)

Scottsdale Arizona was beautiful. I was really impressed with the zero landscaping and the very creative usages of gravel, rocks and stones.

However, it is almost impossible to get a decent crab cake outside of Maryland, my home state. A Scottsdale restaurant had "Maryland Style Crab Cakes" on the menu. Excited, my wife was ready to order. The waitress who was originally from Maryland confided that their crab cake had filler. Folks, real Maryland crab cakes are made with luscious lumps of crab meat, no filler.