January 25, 2011
Keeping my new year's resolutions to lose ten pounds and call out blacks who exploit race, I call out my third incident of race exploitation of the year; this one committed by Rev Al Sharpton. 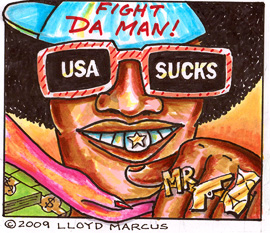 Sharpton appeared on MSNBC with a panel of white liberals discussing gun control. Speaking about gun violence in the black community, Sharpton said, "There are no gun manufacturing plants in the black community." Wow, talk about passing the buck. http://www.theblaze.com/stories/al-sharpton-msnbc-deutsch-with-the-whole-tucson-shooting-and-no-mlk-day-should-strange-arizona-secede-from-the-union-already/

So according to Sharpton, black youths shooting each other, as always, is whitey's fault. Evil gun manufacturers infiltrated the black community. Poor powerless simple minded blacks, seduced by the shiny things, purchase their guns and use them on each other. Incredibly, sycophant white liberal members of the MSNBC panel nodded in agreement with Shapton.

Will somebody please tell this despicable man to "Stop it." Passing the buck regarding black on black crime to gun manufacturers will not save the life of one black youth.

Mr Sharpton, rather than seeking another way to portray blacks as victims, which always leads to another government program/government check, how about doing something truly useful.

"Reverend" Sharpton, address the moral decay in the black community. In your rant on MSNBC, you said black kids want to be like, Scarface. Most black kids today have not seen the movie.

You completely ignored the real "elephant in the black community's living room," fatherless black boys who join gangs and black gangsta rappers who call black women "B" and "W," rap about killing police and killing anyone who dares "dis" them.

Democrats give black gangsta rappers a pass because they further the democrat agenda to create a "blacks are victims of a rich white racist America" mindset in as many blacks as possible. Thus, insuring a monolithic black vote for democrats.

Address the tsunami of black kids dropping out of school; why a majority of blacks are born out of wedlock and genocide level black abortion rates.

Rev Sharpton, these issues have nothing to do with, nor are the fault of, white people, the rich or America.