Lloyd Marcus
Republicans fear tea party will be a spoiler

January 28, 2011
During dinner, my republican buddy cautioned, "You tea party folks commitment to principle, supporting unelectable candidates, could cost us the 2012 presidential election just like you screwed things up in Delaware." He went on to say, "A bad republican in office is better than a democrat." 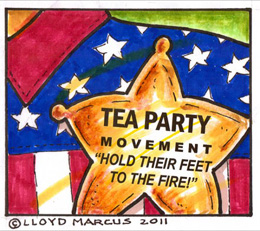 When a battered wife forgives her husband's abusive behavior numerous times, she is in essence, teaching him how to treat her; sending him the message it is OK to abuse her. Thus, she gets what she tolerates.

The Tea Party Movement will no longer vote for scoundrels; accepting political betrayal as a way of life. As I stated, you get what you tolerate.

Having said that, we live in an imperfect world. On occasion, for the greater good, it may be wise to vote for the lesser of two evils.

But in general, we will not continue to be enablers to those who betray us.

The burden is not on us Tea Party patriots to relax our principles. The burden is on the republicans to get with the program; give us decent candidates to vote for.

We are reasonable. We are not asking for candidates who can walk on water and feed five thousand with a few fish and a few loaves of bread.

Republicans, all we ask is that you give us candidates who believe in and are committed to the principles and values the Republican party claim to stand for. Do that, and expect a GOP landslide victory in 2012. Y'all have a nice day.