March 22, 2012
Black pundits say that to be black and Republican makes one a despicable race-traitor worthy of no-holds-barred punishment. As a black conservative Republican, I'm not frightened by this; it just angers and frustrates me. 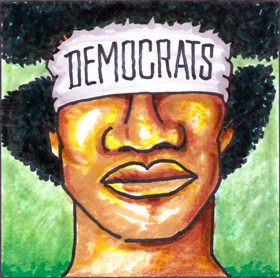 My frustration comes from the knowledge that those claiming to have black America's empowerment and best interest at heart are the "elephant-in-the-room" problem. They lie to black America. Who are "they"? They are democrats committed to keeping blacks viewing themselves as victims. They are racist bitter black politicians with huge chips on their shoulders, seeking eternal "payback" for America's original sin of slavery. These black politicians are rewarded by the democrats for delivering black votes.

They tell you English is too difficult to learn and that standards must be lowered. They tell you that blacks who speak correct English are traitors trying to be white. They tell you that despite the fact that showing proper ID is required to board an airplane and a za-gillion other things, requiring ID to vote will disenfranchise blacks. Thus, their message is that blacks are too stupid to acquire ID.

When I was growing up in the black ghetto of east Baltimore, several corners had grocery stores owned by Jews. Later the Jews were replaced by Asians. Huge families lived upstairs, and their store was down stairs.

The community resented Jewish and Asian store owners in black neighborhoods. I always thought, "Why?" These people did not receive a start-up check from the government. They took a risk. They rented in the black ghetto because it was cheaper. They worked long hours. Experience taught them to install a wall of bullet proof glass, separating them from their customers. Fourteen, fifteen family members lived above their businesses. These Jewish and Asian people were pursuing the American Dream the best way they knew how. What was stopping their black customers from doing the same thing? Answer: In many cases, blacks were relying on democrat welfare programs.

I hear you — democrat brainwashed fellow blacks yelling at me: Lloyd, you Uncle Tom SOB! America is racist, and blacks did not have a fair shot in those days!

Yes, racism was an issue in those days. But how do you explain the entrepreneurial success of black millionaires in Harlem in the 1920s?

Blacks have been congressmen and business owners in America since the 1800s. And yet, democrats continue to tell us that we are incapable of finding our way to acquire an ID.

Democrats and bitter, small-minded blacks insist on forcing blacks into their "black box." They say authentic blacks must have had a "ghetto experience."

When the Bill Cosby Show first hit TV, it was highly criticized because the sitcom black father was a doctor and his family lived in a nice home. I heard the same criticism of Diahann Carroll in her TV sitcom, Julia in which she played a successful black nurse — not reflective of the black experience. The Cosby Show and Julia were outside of the democrat-promoted "black box."

In my youth, I met a black Master Swordsman. Excited, I carted him around to black community centers because I wanted black kids to see that blacks could be successful in fields beyond entertainment and sports.

Despite blacks succeeding today in almost every area of American life, democrats continue to portray black Americans as still getting-the-short-end-of-the-stick. Democrats promote an image of the authentic black experience as a majority in need of government entitlements, as people who can't find their way to acquire ID — sitting at home watching Maury on TV, anxiously awaiting for the results of the DNA test to discover the name of Keysha's baby's daddy. This is the democrat's black America.

This is not black advocacy or empowerment. It is demeaning, humiliating and crippling. Why can't my fellow blacks see this obvious truth?

I am a Republican because the Republican Party respects my intelligence — no special concessions or lowered standards. 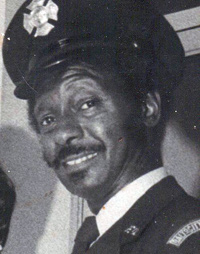 In the 1950's, my dad was one of the first blacks to break the racist color barrier into the Baltimore Fire Department. The white firefighters rejected my dad and made conditions horrific for him. Still, dad won "Firefighter Of The Year" two times. That's what I am talking about!

Given the opportunity, in their typical denigrating of black intellect, democrats would argue that requirements for Firefighter Of The Year be lowered to give my dad a "fair" shot at it. Lowered standards would have robbed dad of the dignity and pride of his achievement. Thank God such was not the case.

Dad, a black man, won Firefighter Of The Year because he was the best! Yes, I am a black conservative Republican and proud of it. All you blacks who think the democrats are your friends, wake up and smell the betrayal.