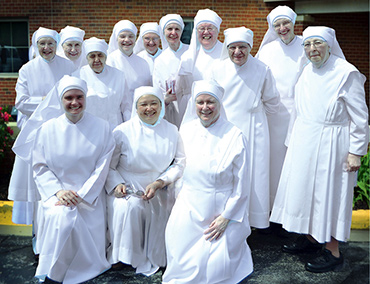 For 175 years the nuns of Little Sisters of the Poor have been ministering to the elderly, poor and dying. Under decree mandated in Obamacare, the Little Sisters are ordered to bow down in worship to King Obama's golden idol, abortion. Non compliance threatens to be the death of their extraordinary ministry. http://bit.ly/18m73VP

Displaying deceit characteristic of our Liar-in-Chief, Obama's DOJ have offered the Little Sisters a serpent disguised as an olive branch. The DOJ told the Little Sisters that if they would simply sign a document condoning abortion services for their employees an exemption from the mandate would be granted.

The wise Little Sisters refused to sign what they perceived to be a "permission slip" for abortion services; a back door scheme by the DOJ to get the Little Sisters to betray their religious faith.

Like Daniel in his day, the Little Sisters remain faithful. Their case has gone to the U.S. Supreme Court. http://bit.ly/1d7moQI

It is profoundly evil to persecute a Christian ministry that has been ministering to the needy for 175 years. Surely, the DOJ has to know that legally bludgeoning the Little Sisters of the Poor into submission will be a PR nightmare for the Obama Administration.

So why is Obama's DOJ hellbent on forcing the Little Sisters to betray their commitment to God? The answer is our country is under siege in the process of a tyrannical hostile takeover.

The Obama Administration has transformed governmental agencies into his iron-fist enforcers. Their laser focused mission is to assist in the full implementation of the liberal socialist/progressive agenda; Obama's vowed fundamental transformation of America.

Like every hostile takeover by a regime, opposition is dealt with swiftly and severely. Everyone must be politically beaten into silence and submission; even the Little Sisters of the Poor.