Joan Swirsky
The unstoppable Trump train
Delivering on his promises, decimating the opposition

August 14, 2017
Hard to know which body is held in lower esteem, Congress or the media. But for a long time, the media thought they were invincible, based largely on their success after forming the JournOlist in
2007 – a cabal of 400 leftists who vowed to destroy anyone who said a single bad word about the poseur "president" Barack Obama.

When said poseur denied his lifelong friendships and political associations with fulminating anti-Semites, enacted the disaster of socialized medicine and socialized public education, eviscerated our military, doubled the national debt, signed a deal with genocidal Iran, and sang the praises of peaceful lslam as dozens of horrific Muslim terrorist attacks around the world attested to a decidedly sub-human species, JournOlist went into action to squash his critics like they were so many pesky cockroaches. 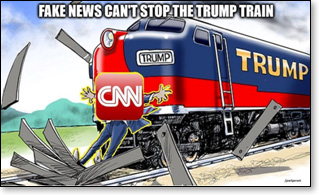 The JournOlist's goal last year was to insure that the, ahem, legacy of the poseur would be continued by another globalist shill, Hillary Clinton, who shamelessly extorted massive "donations" from foreign government leaders and tin-pot dictators alike to fill the coffers of the Clinton Foundation, a slush fund of undisguised bribes and payoffs designed to insure access to power. Curious that this windfall completely dried up the day after Nov. 8, 2016.

Not that anyone liked Hillary or could stop themselves from cringing as she bobbled her head, affected a southern accent in front of black audiences, and lied through her teeth at every turn.

No, to the real powers-that-be on the Council of Foreign Relations, behind the International Monetary Fund, in the cesspool known as the United Nations, and among the big-money guys on Wall St. who actually buy our politicians and so run our country, Hillary was yet another Barack Obama, an easy-to-manipulate functionary, a front person to do their bidding and move them closer to the One World Government – and total power and control – they all crave.

And why do they crave such immense power? Partly for the accumulation of even greater wealth – my bank account is bigger than yours! – but also because they genuinely believe that they are immeasurably smarter than the masses and so exquisitely suited to call all the shots about everything to do with human existence from cradle to grave.

After nearly one hundred years of planning and plotting their takeover of the Democratic Republic of big bad capitalist America, the socialists and communists and jihadists among us – who under Obama, frighteningly, were implanted in the highest positions in virtually all departments of our government, hence the avalanche of leaks – were caught off guard when along came a genuinely unanticipated wild card into the presidential race of 2015-16, billionaire businessman and successful TV personality Donald J. Trump.

Everyone witnessed the patronizing and supercilious snickering of fake journalists like ABC-TV's George Stephanopoulos, MSNBC's Andrea Mitchell Greenspan, CBS-TV's Scott Pelley, NBC-TV's Chuck Todd, everyone at CNN, starting with its president Jeff Zucker, at the prospect of a Donald J. Trump candidacy.

Everyone – except for us Trump believers – watched and believed all the pollsters, every single one of them, predict not a mere Hillary win, but a resounding victory, right up until 8 p.m. on the night of the vote.

And, of course, everyone remembers that in spite of all the billions spent on Hillary's candidacy, in spite of every [inaccurate] poll, in spite of a Democrat Party that over decades has become expert at rigging elections, and especially in spite of the rancid collusion of the media in predicting her win, the American people had another idea. 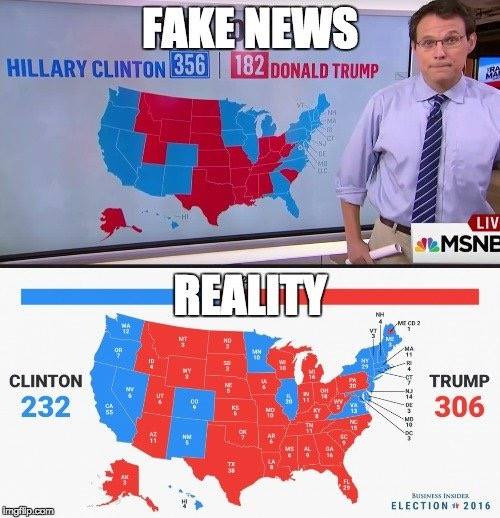 Not since we peasants rose up between 1775 and 1783 to defeat the Crown of England under the leadership of General George Washington has an electorate been so inflamed and passionate and ideologically driven as in the election of Donald Trump on November 8, 2016.

Our message was clear: We hate the Communism and Socialism and Jihadism that has contaminated our body politic, and we love American patriotism and capitalism and a strong military and the man who is saying "Make America Great Again!"

Throughout American history, both on a national, state, and local level, contentious elections have been won and lost by a hair. Sometimes there is a lengthy recount, as in Bush v. Gore in 2000. Sometimes there is litigation, usually to no avail. But there has never been anything like the massive leftist meltdown after Donald Trump walloped Hillary in the Electoral College and won the presidency.

To this day, the hysterics go on. Why is that?

It is because President Trump's victory was a total, complete, comprehensive, and devastating repudiation of everything Barack Obama and the left stood for, but more important, what his handlers and billionaire world-globalists and the leftist media moguls stood for, and, of course, what Democrats and Republicans In Name Only (RINOs) stood for.

According to Wayne Allen Root, in discussing the recently failed Obamacare repeal vote – but this applies generally – "the senators who voted against the repeal are corrupted, bribed, on the take. Senators and Congressmen are making an unimaginable fortune off of Obamacare. That's why they are against the repeal. They don't want to end the gravy train. They want the system complex and expensive. They want government involved. They want taxpayer money wasted by the billions. That's how they milk the system. They all own stocks of medical companies, health insurance companies, pharmaceutical companies. I'm betting many actually own companies with government contracts that benefit from Obamacare. They put them in the names of their spouses, children, parents, siblings, childhood buddies. They own them in offshore accounts. The conflicts of interest are the size of Texas."

There you have it. But candidate Trump took a machete to the entirely crooked, corrupt, self-serving, back-slapping, vote-rigging system that has been running our country and economy and foreign policy and independence into the ground for the past at-least 75 years.

It's as if someone showed up at your door and told you that everything about your life, your values, your beliefs, even the furnishings in your home, was meaningless and disposable.

"But I've lived here for 50 years!" you may protest. "This is who I am, what I've worked for, my belief system, my identity!"

"Tough," the person at your door says. "You have bad values, warped beliefs, shabby furnishings, a malevolent identity, and you're a crook – and I am here to wipe you out, and everything you stand for! And by the way, I'm also going to expose all your dirty laundry, your crimes, and the criminals who aided and abetted you along the way."

That is what we are witnessing today. Thankfully, President Trump is still the smartest guy in the room and fully up to dealing with the sewer rats who are spending every day and night trying to undermine him.

NO UNDERMINING THESE ACCOMPLISHMENTS

In mid-May, I wrote an article entitled The Juggernaut & the Jerks, which spelled out the stupendous accomplishments of President Donald Trump in his first three months in office. The response was tremendous, many people thanking me for bringing to their attention hundreds of the president's achievements they had never heard of or read about or seen on TV. They agreed with my description of the president as a virtually unstoppable juggernaut and that members of the media were indeed a bunch of jerks.

Well, whaddaya know? Plus ça change, plus la même chose! Now that the juggernaut president has just passed his 200th day in office, he is still going at warp speed in chalking up significant accomplishments and, at the same time, draining both the national and international swamplands that have contaminated our politics for decades, and the media are still spewing out fake news and fake polls in their desperate but impotent attempts to derail the unstoppable Trump Train. 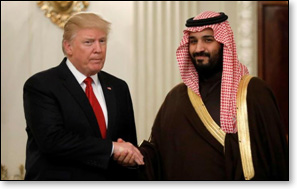 Here is an impressive – but not comprehensive – list of President Trump's accomplishments in his second three (almost four) months in office:
There's more. According to both The Gateway Pundit and Joel B. Pollak, Senior Editor-at-Large at Breitbart News:
And according to political operative Roger Stone: 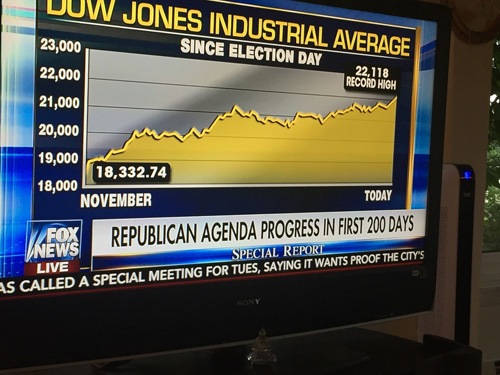 The staged protests we're witnessing, even as I type, are funded by the same globalists who embrace capitalism with a passion – hence their billions – and live in dazzling splendor and luxury. But they sucker astoundingly gullible leftists into believing they are for "the little man" who needs Big Government to survive, and they pay them to hold up shiny new placards and protest a president who is actually – empirically – bringing jobs and safety and fair trade and border security and respect for our veterans and genuine equality back to America.

If leftists can't get on board with this agenda, I quote President Trump when he says: "Sad."