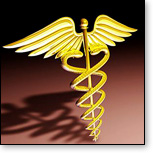 It's the greatest going-out-of-business sale (for the U.S. as we know it) in the history of the world! No congressman wants to give up his vacation! So you must act now and lean on Congress to put you under the government thumb!

President Obama says we need this miraculous snake oil now or  according to Henry Waxman  your congressman and senators (gasp!) will have to give up their August vacations. So get with the program today! Right now! No time to read the fine print (or even much of the large print.) Act now. There is no time to lose!

Upon his return from another busy apology tour, President Obama told Congress to get with it  "buck up" was his exact wording. "This is a problem that we can no longer defer," he intoned. In an order worthy of a commissar, he added he expected the full House and Senate to act by the August recess.

The director of the non-partisan Congressional Budget Office (CBO) told the Senate Budget committee that the Health Care Reform bill drafted by Democrats would drive the economy further into the ditch than it already is. This would be accomplished by increasing deficits and driving us more deeply into debt. Yet, the president says Congress absolutely must pass the bill to boost the economy.

People laugh at Vice President Joe Biden when he says we "have to go spend money to keep from going bankrupt," but when Obama says something just as silly, he gets away with it. Where is Dan Quayle when we need him?

So let's list the big rush to hurry and pass this monstrosity without adequate time to digest it as Reason Number 1 for its rejection. Number 2 is that it will worsen the economy. Now let's venture into the rest of the weeds.

The decision-maker for your medications will not be your doctor, assuming he or she remains in the profession. That decision will be transferred to some bureaucrat in Washington.

As this column has explained, the claim by the president that "if you're happy with your current health care plan [clap your hands?] you will get to keep it." That is totally disingenuous, and he knows it. He is not a stupid man. He knows that once the planned government health insurer is in place, Big Brother is both the referee and a player in the "competition," not unlike a referee who also coaches one of the teams in a football game.

It is estimated this will ultimately drive 119-million Americans out of their current health plans and they will be forced  yes forced (see below)  into the government "single payer" system. One marvels at the sheer genius of the Orwellian word games. Government diktat becomes "single payer." Cute  no?

The line-by-line researchers at Investor's Business Daily have found on page 16 of the bill a provision that spells out in the plain English language that if you leave your current individual plan and want to buy another private health insurance for yourself and your dependents, you will find that  surprise!  that option is closed to you. And guess what that means  surprise!  you have no choice other than to join the referee's team  the government plan. The plan that is intended in a very short time to become a monopoly. 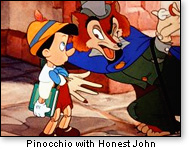 Thus the mantra that "if you're happy with your current health plan" ad nauseum can be compared to the clever fox, Honest John, who lures Pinocchio to Pleasure Island, where his hapless victim becomes a work donkey to drive a chariot under the lash of the whip.

The legislation would impose an income tax on over a million small business owners and about two-thirds of the profits earned by this country's small businesses, according to Americans for Tax Reform. And don't forget that small businesses in America have provided 2 of every 3 jobs in the U.S. in the past decade.

Just what we need, with unemployment flirting with double digits, right?

No. 6  the "uninsured Americans" who aren't

We are forever bombarded with the propaganda about the "46 million uninsured Americans." The claim is dishonest, as we've documented in our last visit on this issue (See "Socialized Medicine Part 5"  June 22, 2009). Nearly 10 million of them are illegal aliens, according to the Census Bureau. If you were to sneak across the border into Mexico, you wouldn't be insured by any Mexican health plan, either. So what?

17 million uninsured make more than $50,000 a year, and another 7 million have annual incomes in excess of $75,000. They have options they choose not to exercise.

Add the young and healthy who choose not to be covered and those who are changing jobs and are uninsured only for a very short time, and you end up with maybe 10 million Americans who are not insured and have no recourse. A safety net for those people would surely be possible without a huge plan that is so convoluted as that being promoted on Capitol Hill under Obama's orders.

Oh, but a simple safety net for those really unable to help themselves would not do, you see, because anything as narrowly focused as that would deprive Obama and his party's kook base of the power they seek over your life. You have to remember that the Democrats are running out of victims. So it's a huge new "entitlement" to the rescue  one that sweeps you into their own "Pleasure Island" and that they and their ACORN thugs can use as fodder for their demagoguery every election day.

President Obama has said that seniors, as they reach their latest years, should satisfy themselves with being in a hospice. He will likely regret that unfortunate (for him) choice of words.

Here is how my copy of Webster's Dictionary defines Hospice: "A shelter for pilgrims or strangers, esp. one kept by a religious order."

Translating the president's statement from Obamaese into English: You old people in your final years or months are becoming a nuisance. Get off the back of my health care plan and go to some charity to die. No death with dignity for you.

And it won't be just in your very last months, either. You may be over 65 or 70 and very alert and active. Yet you need a hip replacement? A bureaucrat looks at your chart and says, "Too bad. Can't afford to give you that at this stage in your life." Don't think that can happen here? There are reasons many of our neighbors from Canada end up seeking care in Seattle, Minneapolis, and other U.S. cites close to the northern border.

This one is self-explanatory. There are multiple horror stories of Canadian patients who either died while waiting for care or who survived only because they came to the U.S. for remedies. Yes, I know we've sometimes had to wait a long time in emergency rooms, but in "single payer" countries, we're not talking about hours or even days. We're talking months or years.

The president and congressional Democrats have spoken of cutting Medicare to pay for his proposed vast new "health care" plan. Seniors who depend on Medicare as their primary insurer would get a rude awakening.. But wait. Isn't Medicare itself going broke? Isn't Medicare in even more trouble than Social Security? Which leads us to.......

Trustees for Social Security and Medicare have said Medicare's fund for paying hospital costs will run out of money in 2017. Where are the incentives to keep those costs within reason? 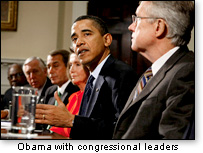 Where does Obama get off saying if our congressmen and senators don't hurry up and enact his program before they've even had a chance to read and digest all 1018 pages, future premiums will "skyrocket"  when costs are out of control under the much narrower plan the government already has in place? If federal health care can't deal with that, how can we expect a nanny government to do any better with a program that supposedly cures all the ills associated with the entire health picture for "all Americans?"

There are other ways to reform the health care system.

These would include a combination of rooting out Medicare and Medicaid fraud; reforming medical laws on liability issues so as to discourage lawsuits whose aim is "jackpot justice," rather than payment for pain and suffering; strengthening wellness and prevention programs that encourage healthy living; and allowing small businesses to collaborate in order to purchase health insurance just as the big corporations do.

There are other ideas such as health savings accounts and allowing the consumer to purchase insurance plans outside of his or her state  thus encouraging more competition in the industry.

President Obama's favorite pastime is to label anyone who proposes alternatives such as those just referenced above as "naysayers," because they don't comport with his plan of stipulating government as the be-all/end-all.

What such alternatives would do, you see, is put you  the consumer  in charge, with individual ownership, individual choice, and price transparency. They would also cut the big trial lawyers down to size, and since they grease his party's money-machine so that it is well-lubricated, that is not the kind of reform that "Naysayer" Obama is interested in promoting.

You can bet your last dollar that the senators and congressmen who are willing to saddle you with this albatross will not apply it to themselves. They have what is arguably the best medical program in the world, but you see, it's just not good enough for you.

A Senate committee the other day approved by a one-vote margin an amendment to require that the lawmakers themselves drop their current coverage and take on the new plan once it is in place. That was in open session  when the world was watching. When the measure is being negotiated behind closed doors where the world can't watch, look for that provision to disappear as if by magic. President Obama himself has admitted his program is not good enough for him and his family. You have to understand his scheme is only for the "little people."

Again, this is not about your health care. This is about power.