Wes Vernon
Terrorism = act of war
And: So you want to tax churches? "Careful what you ask for"

November 16, 2009
Rudy Giuliani is at his best when he's all fired up. Just as he was "America's mayor" during 9/11, so too — in a different sense — is he a hero when speaking out against policies that ignore the lessons of 9/11.

Exhibit A is the administration's plan to send the terrorists who plotted 9/11 to the heart of New York City. There they are to stand trial in a civilian court, where they will be accorded the same constitutional rights as purse snatchers and bank robbers. Normal, common-sense Americans from coast to coast are appalled. Giuliani gives voice to their outrage at the pre-9/11 mentality that rules in the Obama White House.

Attorney General Eric Holder and others of his ilk justify this official act of insanity by saying it is a chance to — all together now — "show the world" that we don't put enemy combatants before star chamber proceedings and then send them to the firing squad. We cannot give them the military trial normally accorded enemy combatants because — again, all together now — "we're better than that."

In reality, we need not "show the world" a bloody thing. We pulled their chestnuts out of the fire in two world wars. Since European snobs peered down their snoots at what they falsely yammer is a "torture" treatment at Club Gitmo, let's turn the 9/11 terrorists over to Europe's tender mercies. (So far they decline that invite). Or better yet, next time their internecine battles spawn an Adolph Hitler, we can always leave them to their own devices. Since some of them compared George W. Bush to Adolph Hitler, let's see how they deal with the real thing, absent our "intrusion" into their "internal affairs."

Maybe we should have sent German POWs in World War II into civilian court systems and let them get lawyered up by the ACLU. Think FDR would have abided that? How about Churchill? No wonder Obama had the bust of Churchill removed from the Oval Office the moment he stepped into the place. When the bombs were raining down during the London blitz, Churchill wasn't telling his fellow countrymen, "We mustn't jump to conclusions, we're better than that." Barack Hussein Obama can't stand the comparison. By that standard, removing the statesman's bust from the Oval Office made sense.

Khalid Sheikh Mohammed — one of those to be tried in New York — is also the filthy animal who beheaded news reporter Daniel Pearl. He has boasted of his leading role in planning 9/11. But if you think that confession automatically will land him behind bars or hand him the death penalty, you have not considered the bearded pony-tailed loony-left lawyers of the communist-created National Lawyers Guild and their fellow sixties children who populate much of the bench.

On Fox News Sunday, Mayor Giuliani said the 9/11 attack was not a "crime," but an "act of war," and therefore, the perpetrators should be tried in a military court.

Picture putting the U.S. on trial in New York, brought down by lawyers for the German spies who slipped ashore on Long Island in World War II. Imagine His Majesty's government in the dock during a London civilian trial of German bombers who terror- bombed that city in 1940.

As soon as Giuliani had completed his interview, moderator Chris Wallace turned to Senator Jack Reed (D-R.I.) for the "other side."

During that segment, I heard the senator use the words "crime" or "criminal" at least four times in describing the animals who plotted 9/11. That term "criminals" has been applied to the 9/11 hijackers by the terrorist apologist group, the Council on American Islamic Relations (CAIR).

Read my lips: The terrorists are not "criminals." They did not steal a loaf of bread or rob a tinker toy shop. They are enemy combatants in a time of war. Reed's senatorial aversion to reality is frightening.

If the senator had appeared alongside Giuliani for a one-on-one debate, America's mayor would have made mincemeat of him.

Which raises the question: Why didn't the two appear together and duke it out? Had Senator Reed refused a joint appearance with the mayor? Did he wimp out because he was afraid? Or maybe Chris Wallace just decided that putting the ineffectual Reed one-on-one against the well-grounded debating skills of Giuliani would subject Fox News to a lawsuit by the Humane Society.

Here in Washington, the local D. C. government is at odds with the Catholic Church over the issue of same-sex marriage.

The Washington Archdiocese is fighting back against an effort by the local city council to intrude on the centuries-old sanctity of traditional marriage. The church says it will "be unable to continue social services" it runs for Washington if the city does not change a proposed law permitting gay marriage.

Catholic Charities — the church's social service arm — serves 68,000 people in the District of Columbia, including one-third of the city's homeless.

Shut up and take your secular medicine

Of course, this flap has revived the age-old refrain that churches that dabble in politics should lose their tax exemption.

This would be a good time to set the record straight:

What the Constitution does (and does not) say 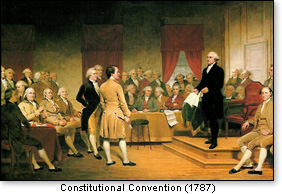 "Congress shall make no law respecting the establishment of religion, or prohibiting the free exercise thereof; or of the press; or the right of people to peaceably assemble, and to petition the Government for a redress of grievances." (Italics added)

When the Founders wrote that amendment, they had in mind the strong-arm tactics that they feared might be used by government to shut up church clerics who protested their faith was under assault and to silence anyone — religious or secular — to speak out in opposition to government policy.

Secondly, the practice of one's faith was specifically protected. Sometimes politicians — including those found wearing black robes in courtrooms — will cite the injunction against Congress establishing a religion (a concern derived from experiences with government-established religions in other nations), but neglect to focus on "or prohibit the free exercise thereof."

As for multiple attempts to shut churches out of public debate on all public issues on grounds of "separation of church and state," let us turn to the Declaration of Independence:

"We hold these truths to be self-evident, that all men are created equal, that they are endowed by their Creator with certain unalienable rights, that among these are life, liberty and the pursuit of happiness." (Italics added)

The Catholic Church has every right to oppose public policies it sees as a threat to its faith. Intimidation tactics were used against Catholics (and also Mormons) who supported the effort in California last year to restrict marriage to opposite sex couples. The initiative passed, much to the anger and vicious hatred of the organized political gay rights movement which presumes to speak for all gays.

The late Jerry Falwell took flak on such social issues, as does Pat Robertson to this day. Many of us thought those fellows were exercising their right of free speech under the First Amendment. I don't recall either one of them sticking a gun in my ribs and warning, "Now you live the way I tell you to or I'll pull the trigger." Come to think of it, neither one encouraged suicide bombers. Nor did they plot to ram airliners into buildings on the pretext of following "God's will."

The "separation of church and state" was added to the IRS rules as a purely political move by the late Lyndon Johnson.

After his election to the Senate by a suspicious 87-vote margin in 1948, Johnson's candidacy for re-election in 1954 was roundly criticized in Texas by two anti-communist non-profit groups that challenged his liberal agenda. In retaliation, Johnson slipped into the IRS code a prohibition against non-profits — including churches — from endorsing or opposing candidates for public office.

As the Traditional Values Coalition has said, "This is irrational and fails to take into account the entire history of religious freedom in the United States."

Now in 2009, the IRS code language has been stretched to muzzle anyone representing a religious faith who voices opinions on issues clearly related to church doctrine.

Most of the agitation for shutting up the clergy — or those who speak in their name — comes from the leftward end of the body politic. But before the IRS sends its undercover squad to churches to nail a pastor who speaks out against abortion (for example), let's just imagine what would happen if the gag order were interpreted in its most literal sense.

Obviously, that would mean the Rev. Jesse Jackson and the Rev. Al Sharpton would have to shut up, right?

And that's just for starters: What about the National Council of Churches (NCC) — nailed by CBS on 60 Minutes years ago for giving aid and comfort to the Soviets?

What about the NCC programs for affirmative action, "eco-justice," gender-neutral language, and other hot-button issues? Non-political? Really? I once covered a speech by Senator Bill Bradley at the Riverside Church in New York City — where he advocated all manner of liberal agenda items. Guess he would have to shut up too, wouldn't he?

Many of the leaders of the civil rights movement were clergy. What about that? At the time, it was considered "political." Should they have had their tax-exemption removed?

You see, once you go down that road, you really can't just pick and choose between the clergy-involved issues you agree with and those you don't. The old admonition applies: Be careful what you ask for.

The late Paul Weyrich and his longtime associate Bill Lind — in their recent book The Next Conservatism — have called on conservatives to "separate themselves to some extent from those elements of our society which promote decadence." Home-schoolers are cited as one example of such needed "separatism."

The separation is not intended to be permanent, and the authors emphatically counsel against conservatives abstaining from politics. But they say we have a two-track society already, with conservative America playing defense against an onslaught of Marxist-like, anti-God, anti-family moral decadence.

Weyrich and Lind fear there may come a time when conservative advocacy itself may be designated as "a crime." The time to stand up for this country's ideals is now — while we still can.