Wes Vernon
Failure in battle: "We did it before, we can do it again?"

December 3, 2009
The day after the Japanese bombed Pearl Harbor 68 years ago, President Franklin D. Roosevelt went before the nation and declared December 7 a day "that will live in infamy." 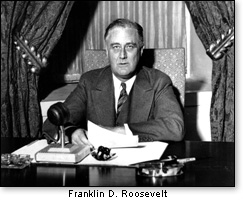 He went on to galvanize Americans to the task at hand  to beat back the enemy, and he vowed to equip our young men in the military with everything they required to do the job. Nothing short of total victory would do.

Then Mr. Roosevelt inspired the national unity that followed, declaring, "With confidence in our armed forces  with the unbounding determination of our people  we will gain the inevitable triumph, so help us, God."

That call to unity was reflected in the slogan  soon to be a popular song  "We did it before and we can do it again."

America had been savagely attacked and it was time to close ranks. The president's call to action was followed by a surge in military enlistments, including those of former anti-war activists Charles Lindberg (the famed aviator) and R. Douglas Stuart, Jr., heir to the Quaker Oats fortune and the founder of the anti-war America First Committee (AFC).

The AFC had been formed in the late thirties by patriotic Americans who believed FDR would suck us into another of Europe's internecine spats. The overwhelming majority of our countrymen believed  and not without reason  that our involvement in World War I was senseless and had served little purpose other than the pull the British Empire's chestnuts out of the fire.

The group, which gained in popularity over a two to three year pre-war period, included as members future U.S. President Gerald R. Ford, future Supreme Court Justice Potter Stewart, future vice-residential candidate R. Sargent Shriver, and noted author John T. Flynn. Future president John F. Kennedy sent a note of support. Among its most vocal supporters in Congress were Senators Burton K. Wheeler of Montana, William Borah of Idaho, and Robert A. Taft of Ohio. After the Japanese attack, the AFC folded, realizing there was a time to pursue the anti-war cause, but that time had passed. The Japanese had left us no choice other than to go to war. 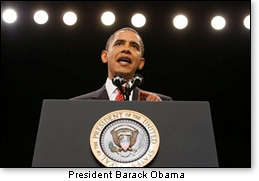 On December 1, 2009, and 12, presidents later, Americans heard a different sound from their commander-in-chief  an uncertain trumpet. President Barack Obama's code words might as well have spelled out something along these lines:

As your commander-in-chief, I am sending in more troops to Afghanistan  home base of the Taliban and believed to have been the hiding place for Osama bin Laden, who was behind the attacks on America on 9/11.

Like Lyndon Baines Johnson with Vietnam, I decline to provide the generals with the resources that they say they require for success. Thus I will "split the baby," so to speak, and provide them with about half the troops they requested. I have asked our allies to contribute some of the additional troops, although I apologize to them for making that request, and I don't really expect them to help. Why should they? They don't think I'm serious.

Though I've had little experience myself with the military  in fact my political base loathes the military  I want you men and women, you patriotic and brave cadets gathered here at West Point, to know I do not loathe the military. But my base does. There's nothing personal about this. It's just that you military people simply are not my party's base. One left-wing commentator thinks I'm in "enemy territory" just by being here.

I could have given the generals what they believe they need for victory, as President Bush finally did in Iraq. But we all know that my ideological church will not allow success on the battlefield or anything that even remotely resembles what George W. Bush did, including how he ties his shoes.

You see, I've already got Michael Moore on my back, and I don't want to end up like Lyndon Johnson, who failed to set a definite "exit strategy" or a date certain to quit. The result was the Haight-Ashbury crowd, as well as my good friends Bill Ayers and Bernadine Dorn, and the entire Hate America Left turned on Johnson. And they did this even though he was pursuing a "no win" strategy, and withheld an all-out victory drive so he could spend the money on his Great Society.

And he did a good job of that. President Johnson expanded the government so much that even a loyal Democrat congressman, Teno Roncalio of Wyoming, upon returning to Washington after a four-year absence, expressed shock at how the government had grown to gargantuan proportions. I perceive it as my duty to grow the government in such a way as to make LBJ look like a piker. Damn the economy, full speed ahead.

I apologize to America's enemies for having to send our troops into battle with them. But I want to put them on notice of a date certain for the beginning of our departure from Afghanistan. True to my worldwide tours, I just wouldn't be true to myself if I did not bow to them and express regret for this 18-month inconvenience. All they have to do is bide their time and wait us out.

So you men and women in uniform, do what you can, and if in 18 months you have to take to the roof of some building in Afghanistan, hop on a helicopter with some desperate Afghanis hanging on to the outside of it as it takes off with terrorists firing away at them, well, you just have to realize this is all in the interest of making the world love us, since we no longer let the word "victory"  or "inevitable triumph" as FDR put it  slip from our lips.

There is nothing disgraceful about defeat at the hand of the butchers of 9/11, some of whom will enjoy a platform to put the previous administration in trial because of the civilian legal and judicial privileges my administration has accorded them in New York City. Our enemies should be thankful that I did not even consult with the New York City Police Department or even Mayor Michael Bloomberg until a few minutes before announcing this. It is all in the interest of world peace  at least hopefully, until I leave office.

And in the interest of making our enemies love us, we can take another defeat in battle. We did it before, and we can do it again." 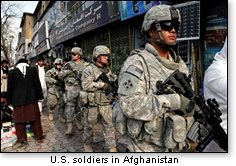 How Americans can react

Those of course, were not President Obama's exact words. We simply translated them from Obamaese into plain English. And judging by the respectful but diffident reaction of the West Point cadets, they saw right through it.

These observations notwithstanding, this column will not join the Michael Moores and others of the Hate America Left in urging a "cut and run" strategy, as a few Republicans have indicated they are inclined to do. We have faith that our brave men and women in uniform will give it their all. They have the sheer guts and love of this country that can propel them to do what they have to do to achieve victory.

They deserve our prayers and support, and we should not hesitate to let them know they have the backing of millions of Americans. Remember, they are all volunteers. No one drafted them. They are going into battle because they love their country. They deserve our prayers, and we should encourage them as they seek to lead us to victory  not because of their commander in-chief, but in spite of him.