January 11, 2010
Prior to President Obama's most recent TV appearance to discuss the failed Christmas Day attempt to blow up an international flight at Detroit, his White House minions promised "shocking" revelations in the president's announcement.

Though most of the media missed it, the promise was fulfilled. For the first time, the president took responsibility (sort of) for the intelligence failure, resorting to a Harry Trumanism "The buck stops" with him. He also acknowledged that the United States is "at war with al-Qaeda." Ooooooh! That's a bold (and "shocking") step up the ladder from the "isolated extremist" he identified a few days (and few news conferences) earlier on the subject in his first public appearance (in his golfing digs) three days after the bombing.

There, we heard word of Farouk Abdulmutallab as the "alleged" bomber and a "suspect" who would be turned over to the criminal courts (instead of a military tribunal) and accorded all the rights of a common horse thief.

But what was really shocking is that after nearly his first year in office, we have a wartime president who clearly would like to shirk his duty (some believe he already has) as a wartime president. He is clearly unfocused. A focused President Obama  speaking from his "alleged" birthplace of Hawaii  would have identified Abdulmutallab as an enemy combatant.

Moreover, even after uttering the forbidden word "war," this wartime president refuses to identify the enemy. Yes, we are at war with al-Qaeda, Mr. President, but it's more than that. Where is the term "Islamofascism," or  if you prefer  "Radical Islam"?

Try to imagine President Franklin D. Roosevelt  at the outset of our involvement in World War II  declaring:

"On December 7, 1941  a day that may live in infamy, but then again may be viewed as a day much like any other  some isolated extremists bombed Pearl Harbor. We must not jump to any conclusions here. Not everyone of Japanese descent is warlike. We shall challenge these alleged criminals with a feather."

How this went down

So unfocused was the president  and apparently those around him  that the very reason they had to go back to the cameras again and again is that the public uproar refused to go away despite their highest hopes and best efforts to wish the uproar off the front pages and public dialogue. They really did believe it would be a two- or three-day story and just fade into the background  all the better to refocus the spotlight on health care (alleged) reform and cap and (strongly suspected) tax. They couldn't wait for the all-important holy causes of putting their dictatorial edicts between you and your doctor and taxing you into the poorhouse.

Nonetheless, the great unwashed refused to stop asking questions. So finally, it was necessary to go before the cameras yet again and admit that though mistakes were made, we won't name names and apparently no one will be sacked.

The most obvious target for "re-organization" (a Washington euphemism) would be Secretary of Homeland Security (DHS) Janet Napolitano, who infamously declared that "the system worked." Ah! So that's it! The Dutch tourist who wrestled Abdulmutallab and  with the help of others  prevented the assassination of 289 passengers and crew  was a secret agent. All along, Janet Napolitano had planted him there to make sure "the system worked." Such brilliant foresight! 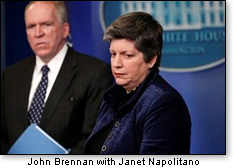 There are those who say Napolitano was merely reiterating the official word from the Obama White House  that a "system" (albeit a bad one) did work. Moreover, it is argued that DHS was created in a politically-correct congressional mishmash from the beginning  and thus bound to be ineffective anyway.

Perhaps that would fly were it not for the fact that Lady Janet has proved consistently clueless. One can cite her description of terror attacks as "man-made disasters," as well as her report telling law enforcers to be on the lookout for the real threat to homeland security  returning servicemen with guns who will be taken in by dangerous "right-wing extremists." Get it? 9/11 was a "man-made disaster," but watch out for those real dangerous returning American soldiers.

Or how about John O. Brennan  President Obama's Homeland Security advisor? Perhaps he should be a ripe target for "re-organization." He justifies (while using more politically adept verbiage) every Obama step that defies common sense on national security matters.

Brennan is a Washington survivor. He claims to have served 5 administrations. He is known for a disinclination to tell the boss he's wrong or should re-think his approach. Apparently, that is how he "survives."

One can make a credible case for firing Napolitano and/or Brennan. But would that solve the problem? Consider the following: 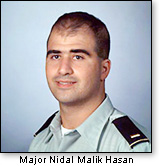 1  Major Nidal Malik Hasan's shooting rampage that resulted in the killings of thirteen of his fellow soldiers. There were plenty of red flags as to Hasan's radicalization, but authorities looked the other way, noting that the Commander-in-Chief refused even to whisper the words "Radical Muslim," let alone identify said radicals as "the enemy." In the Obama world, Hasan's clear act of war was merely "a crime [not an enemy attack] against our nation."

2  The administration has decided to prosecute the mastermind of 9/11  Khalid Shaikh Mohammed  and five of his co-conspirators in a civil court in New York  just a few blocks from the "scene of the crime" in downtown Manhattan. The decision was announced by Attorney General Eric Holder, but make no mistake: No decision of this magnitude escapes the OK from the office of the man who says the buck stops with him. Here, the president is placing Americans in danger. There are about 8 million living in New York City alone  excluding surrounding densely populated suburbs. The president of the United States is charged with protecting Americans  quite the opposite of putting them in harm's way. Moreover, by trivializing the war, he arguably gives aid and comfort to the enemy  all to please the likes of the ACLU.

3  Mr. Holder  again fall guy for the boss  has named a "special prosecutor" to reopen CIA "abuse" cases. Earlier, the attorney general had said it would be "unfair to prosecute dedicated men and women working to protect America for conduct that was sanctioned in advance by the Justice Department."

I couldn't have said it better. Well, yes I could have, actually. In wartime, you don't give aid and comfort to the enemy by going after "dedicated men and women" on our side who had every reason to believe that in fighting that war, they had the full backing of the Commander-in-Chief. You don't reverse course on that principle, even if conducting a war as if it were  well  a war offends the Hate America left. Eric Holder  who once defined America as "a nation of cowards"  should know something about cowardice.

These are just some of the more egregious examples. There are many others. Which begs the question:

Does dereliction of duty justify the "I" word?

The Constitution of the United States says the President can be impeached and removed from office for "treason, bribery, or other high crimes and misdemeanors." 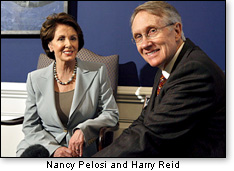 For starters, we should note that the Pelosi-Reid Congress likely would not impeach and/or convict this president no matter what he does  or fails to do. Secondly, you can get a good argument among lawyers as to whether any of the examples cited above legally constitute "dereliction of duty" (I believe they do, but I'm not a lawyer), much less whether they fall into any of the specifically spelled-out grounds for impeachment. (If I had my way, they would, but it's not my call.)

One can speculate whether President Obama (who once taught constitutional law) uses Holder as the bearer of bad tidings, imagining somehow that the president can escape having his fingerprints all over it in public perception...i.e., he thinks we're that stupid.

What needs to be done by conservative barristers in our midst is to keep careful tabs on everything this president does, add it all up if the pattern continues, and perhaps re-visit the issue at a later date, bearing in mind: If failure to protect the American people is not impeachable, what is?

Meantime, while we're looking one way...

More than one observer has expressed a belief that one reason this administration does so many outrageous things simultaneously is to make it all the more difficult for the electorate to keep up with them.

So while the president dropped the ball on the Detroit underwear bomber, the following also merit attention:

1  New ambush to pick your pocket?

On New Year's Eve, USA Today reported that "Bipartisan support is growing in Congress" for President Obama "to back the creation of a commission that would recommend spending cuts and tax increases and require a vote by Congress" (italics added), a process that has worked with the political hot potato of base closings. Even Pelosi says the rising debt should be a priority.

Do tell! This is a classic case of the arsonist heroically rushing to put out the fire. Many are wary that it may be used as the stalking horse for a massive tax increase (no, really?). Some wary conservatives (who quite naturally smell a rat) suggest that a congressional vote on any commission recommendations  most especially a huge tax increase  should await a vote by next year's Congress, which is likely to be more balanced than the current one dominated by liberals. Higher taxes are usually the cure that is worse than the disease.

Even the idea of a commission itself is dubious. High spending is nothing new in Washington. But this Congress and administration plunged headlong into unprecedented territory (trillions vs. billions). Let them step up to the plate and lie in the bed they created. Take this commission idea as an admission of abject failure.

2  Santa Obama leaves lump of coal in your stocking

On Christmas Eve, when we were preparing for the most important holiday of the year, the Obama administration moved to cover an unlimited amount of losses at Fannie Mae and Freddie Mac. The Treasury Department announced it would lift the caps of available funds for each of the companies to $200 billion, or a total of $400 billion out of your pocket and mine.

We were told that this was "necessary to preserve the continuing strength of the mortgage market." Recall Fannie and Freddie  whose executive suites were stacked to the hilt with liberal Democrat cronies and partners  made reckless loans to people who could not afford them and would not have passed muster for homes through a conventional bank loan. That is a major cause of the market crash in mid-September, 2008  leading to widespread unemployment and depleted portfolios.

It would have been more accurate if Treasury had said the move was necessary to preserve the continuing bank accounts of the buddies of the president and members of Congress such as Barney Frank and Chris Dodd.

BTW  Recall when Mr. Obama told bankers in a White House woodshed session that he didn't run for president so he could bail out "fat-cat bankers on Wall Street."

How's this? Fannie and Freddie disclosed (also on Christmas Eve) that Fannie CEO Michael Williams and Freddie CEO Charles Haldeman were to benefit from new packages reaching as high as $6 million a year, including bonuses.

Are we all adults here? Did GOP Congressman Spencer Bachus's comment that the timing of the announcement was meant "to prevent the general public from taking note" suggest anything but the obvious?