Wes Vernon
Needed: a filibuster against the Kagan nomination

July 19, 2010
Democrats have filibustered Republican court nominees without the slightest hesitation  for purely political reasons, as leaked memos have indicated. Senate Republicans should muster a talkathon against confirming Elena Kagan for the Supreme Court. Not for political payback  but because she is a one-woman threat to the Constitution.

Senator Jeff Sessions (R-Ala.), the Ranking Member of the Senate Judiciary Committee has said that option is not off the table. It should remain firmly on the table "until the last dog is hung," to quote the metaphor.

Constitution hanging by a thread

President Obama openly displayed his contempt for the Constitution when he characterized even the radical Earl Warren Court as not radical enough. Why? Because it did not make law so as to redistribute the wealth. This from a onetime adjunct professor of constitutional law. Heaven help his students.

This president is determined to remake the courts in his philosophically socialist image. From that standpoint, he has the perfect nominee in Solicitor General Kagan.

Ms. Kagan is perhaps less qualified to sit on the Supreme Court (potentially for the next 40 years) than anyone ever contemplated for the post in the nation's history. (See this column May 17, May 24, and June 28.)

A public person's sympathies can usually be detected by taking note of the people he or she admires. In Kagan's case, we have a very telling roadmap in the name of Judge Aharon Barak of the Israeli Supreme Court. She introduced him as a speaker when she was Dean of Harvard Law. 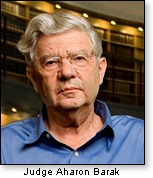 Judge Barak has publicly written that a judge should make and create law so as to give it "new meaning that suits new social needs."

Judge, I wouldn't presume to tell Israel how to order its court system, but under the U.S. Constitution, our courts have no  no, nein, zip, nada  no legislative authority. That is the prerogative of our elected members of Congress and the state legislatures and local legislative bodies. Whether the statutes as written conform to any "new meaning that suits new social needs" is a decision to be made by legislators  not by courts.

Further, anyone who considers Judge Barak to be her "judicial hero" is not fit to sit on any American court, let alone be elevated to a lifetime appointment to the highest court in the land.

Adding insult to injury is that Ms. Kagan has said she believes the court can apply "reasonable foreign law" as the basis for its decisions.

Again  if U.S. legislators deem some foreign law as ideal for implementation in this country, they are free to adopt it  "reasonable" or otherwise. If the latter, they can argue their case to the voters in the next election. If it is unconstitutional, then the courts can make a judgment if a relevant case is brought before them.

That is precisely why so huge a responsibility should never be entrusted to jurists who admire a foreign "hero" who has said (ala Judge Barak) that a judge is "subject to no authority" other than his own whims. 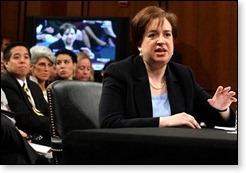 The reasons for rejecting the Kagan nomination are so numerous, one could write a full-length book on it:

 She has been less than straightforward with the Judiciary Committee regarding her exerting undue influence on medical organizations in connection with the partial-birth abortion issue.

There are discrepancies between her committee testimony and the written record clearly showing she lobbied the American College of Obstetricians and Gynecologists (ACOG) and the American Medical Association (AMA) to change their positions to reflect her agenda favoring the sheer infanticide charitably called "partial birth." (For details, see AULAction.org, including remarks by Charmaine Yost  CEO of Americans United for Life Action).

 There are questions about Kagan's role in legal strategies related to challenges to the president's health care bill. Attorney General Eric Holder holds regular meetings with his senior staff. Any claim that Solicitor General Kagan remained silent through those discussions and offered no strategy proposals would strain credulity. If she is confirmed, will she recuse herself from participating in court cases involving the many legal challenges to the Obamacare law that will be brought before the High Court in future years?

 Speaking of Obamacare, Americans from coast to coast have expressed alarm at the inroads this administration is making into their lives  some of which carry overtones going beyond faint hints of the jack-boot mentality  a mindset totally foreign to the Founders and to the America we know. Herewith just a small sample of why Elena Kagan raises legitimate fears in that area:

During her confirmation hearings, in a colloquy with Senator Tom Coburn (R-Okla.), Ms. Kagan pointedly (and repeatedly) declined to say that passing a law requiring individuals to eat three fruits and three vegetables a day would be unconstitutional. 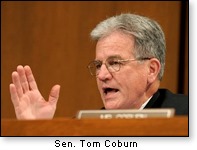 That is not a fleeting frivolity. First Lady Michelle Obama, in a speech the other day, laid out her ideas as to the ideal diet for us. Excuse me. What you or I choose to eat is none of the government's blue bloody business.

Elena Kagan is unqualified for the court. Judges who view intrusion into personal decisions with the nonchalance that she exhibits are a threat to our constitutional republic. Any failure by the Republicans in the Senate to mount a filibuster will raise serious leadership issues on their part.

Yes, the GOP minority status in the Senate raises the odds against Kagan's opponents. That does not mean they should not use every parliamentary maneuver at their disposal to see to it that every person in the country is aware of her disqualifications for the job. (Polls are showing diminished support for her in the nation at large). Let any senator voting to confirm her explain him/her-self to the voters this fall.

Win or lose, this case needs to be made to the electorate.