Arlen Williams
Airline flight still a theater of war; who is the terrorist now?

November 17, 2010
You have an alternative, if you wish to travel by airline. You may either experience voyeurism of a sort no neighborhood peeping Tom can accomplish, that which actually sees through your clothing, or, if you prefer, you may subject yourself to the groping of your sexual anatomy.

"Subject" is the operative word. We are being trained and operationally conditioned, as if in a Skinner Box, at being subjects of our government. Resist and you may not travel; submit and you may fly. That is the classical conditioning model of punishment or reward.

Are you learning your lesson? Big Brother is not only watching you, it is watching you naked — and it is reaching out to make it clear in no uncertain terms, that between it and you, government has "the upper hand."

Reported in the Washington Times: 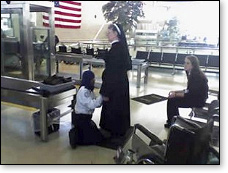 The Transportation Security Administration's demeaning new "enhanced pat-down" procedures are a direct result of the Obama administration's willful blindness to the threat from Islamic radicals. While better tools are available to keep air travelers safe, they would involve recognizing the threat for what it is, which is something the White House will never do.

El Al, Israel's national airline, employs a smarter approach. Any airline representing the state of Israel is a natural — some might say preeminent — target for terrorist attacks. Yet El Al has one of the best security records in the world and doesn't resort to wide-scale use of methods that would under other circumstances constitute sexual assault. The Israelis have achieved this track record of safety by employing sophisticated intelligence analysis which allows them to predict which travelers constitute a possible threat and which do not. Resources are then focused on the more probable threats with minimal intrusion on those who are likely not to be terrorists.

Here in the United States, these sophisticated techniques have roundly been denounced as discriminatory "profiling." Allegedly postracial America has been unable to come to grips with the difference between immoral and illegal racial discrimination and the prudent use of the types of techniques that police on the beat use every day, which is similar to practices the customs service applies to assessing which packages being sent into the country are licit and which were sent by smugglers. TSA believes an 80-year-old grandmother deserves the same level of scrutiny at an airport terminal checkpoint as a 19-year-old male exchange student from Yemen. This policy not only is a waste of time and resources, it denies reality.

The full op-ed may be found here.

Airport travelers call it groping, prodding or just plain inappropriate — a pat-down that probes places where the sun doesn't shine. The Transportation Security Administration calls it the new reality of airport security.

Following the uncovering of a terrorist plot last month to blow up cargo planes en route to the United States, the TSA has instituted a new type of pat-down of passengers, a move that's part of a general tightening of air security. If a full-body scanning machine shows something strange or a passenger declines to go through the machine — which is now in use in the Washington region's three major airports — an officer will perform a more personal search.

The examinations routinely involve the touching of breasts and genitals, invasive searches designed to find weapons and suspicious items. The searches, performed by TSA security officers of the same sex as the passenger, entail a sliding hand motion on parts of the body where a lighter touch was used before, aviation security analysts say. The areas of the body that are being touched haven't changed.

The threat of this new pre-boarding treatment looming before him, a passenger decided to record the proceedings. His personal journal is here:

This morning, I tried to fly out of San Diego International Airport but was refused by the TSA. I had been somewhat prepared for this eventuality. I have been reading about the millimeter wave and backscatter x-ray machines and the possible harm to health as well as the vivid pictures they create of people's naked bodies. Not wanting to go through them, I had done my research on the TSA's website prior to traveling to see if SAN had them. From all indications, they did not. When I arrived at the security line, I found that the TSA's website was out of date. SAN does in fact utilize backscatter x-ray machines.

I made my way through the line toward the first line of "defense": the TSA ID checker. This agent looked over my boarding pass, looked over my ID, looked at me and then back at my ID. After that, he waved me through. SAN is still operating metal detectors, so I walked over to one of the lines for them. After removing my shoes and making my way toward the metal detector, the person in front of me in line was pulled out to go through the backscatter machine. After asking what it was and being told, he opted out. This left the machine free, and before I could go through the metal detector, I was pulled out of line to go through the backscatter machine. When asked, I half-chuckled and said, "I don't think so." At this point, I was informed that I would be subject to a pat down, and I waited for another agent.

The WorldNetDaily article recounting the passenger's experiences may be read here.

And what of a female traveler? Are the TSA agents to determine which is a maxi-pad "on the one hand" and an explosive, on the other? What about those who have suffered sexual abuse? What about children?

And what if a terrorist were to insert his or her explosive in a body cavity? If airport security is to be thorough, should they not be searching the orifices, too?

WND also told us who is responsible for this Fourth Amendment trampling effrontery. 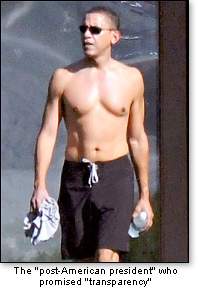 A constitutional attorney preparing to legally challenge the Transportation Security Administration's enhanced screening procedures — which reveal a virtually nude image of passengers — says airline passengers have Barack Obama to thank for the process.

"Legislation has been proposed to mandate full-body scanners and make them the primary screening method in all U.S. airports by 2013, but Congress has yet to act on it," John Whitehead, president of the Rutherford Institute, wrote in a new commentary.

"So we can thank President Obama for this frontal assault on our Fourth Amendment rights. Mind you, this is the same man who insisted that 'we will not succumb to a siege mentality that sacrifices the open society and liberties and values that we cherish as Americans,'" Whitehead said.

So, why has this policy been instituted. when it offends American citizens, costs great chunks of money, and it doesn't address the real threat of Islamic Terrorist attacks on America? Let's see, shall we follow the money?

As reported in the Washington Examiner: 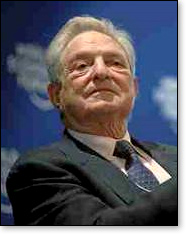 Be sure and read Tim Carney's Examiner column today on the politically-connected lobby for the controversial new TSA scanners that are upsetting airline employees and travelers everywhere. Carney notes that a company called Rapiscan got a $165 million contract for the new body image scanners four days after the underwear-bomber incident this past Christmas. Not surprisingly, Rapiscan is politically connected, observes Carney:

Rapiscan got the other naked-scanner contract from the TSA, worth $173 million. Rapiscan's lobbyists include Susan Carr, a former senior legislative aide to Rep. David Price, D-N.C., chairman of the Homeland Security Subcommittee. When Defense Daily reported on Price's appropriations bill last winter, the publication noted "Price likes the budget for its emphasis on filling gaps in aviation security, in particular the whole body imaging systems."

Does "Rapiscan" stand for "rapid," or for a just a wee bit of psychological "rape," one may wonder?

Round and round the cobbler's bench the monkey chased the weasle.... Meanwhile, "the terrorists have won" and the United States Government has begun to subject us to and participate in the terrorism.

The subversive "9-11 truthers" have taken great pains and at times twisted a great deal of truth, to convince many, that elements of America's government were behind the terrorism of that date. But now, we have come full circle.

Now, the truth of America's terrorism by government stares us in the face, looks through our clothing, and reaches out and gropes us.

Oh, this may be a soft terror, the fear, apprehension, violation, and degradation we suffer, but this is the time of the violence of Soft War on Americans — on our livelihoods, property rights, freedoms, and our very Sovereignties. So, if it makes you feel better, yes, call it "soft terrorism," but the key word of the two is that "-ism" noun indicating belief or practice.

This United States Government has become a terrorist regime.