February 12, 2011
There is a lot of buzz in the conservative air this week, over what may be considered either corruptive or divisive in the ranks, at the current CPAC conference. From any moment to the next, it may be about one group's promotion of homosexuality, or another man's, Grover Norquist's, apparent Islamist activism, in conjunction with his Muslim wife. 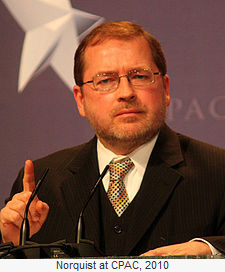 Norquist has done much good, but his aims and influence are exemplary of what is has been harmful and corruptive in conservatism for a very long while. That is not because of his marital relations, but because he is married to unbalanced transnationalism. And though he is touted as a principal force for small government conservatism and big tent unity, he opens the door to the biggest government of all and thus becomes a very divisive factor, indeed. Not to worry though, this is not a personal diatribe. With your permission, a much broader point is to be made, featuring him only for the example.

Knowingly or not, Mr. Norquist is an operative for unifying conservatives to conserve the path to selling out America, by the century old, relativist, communitarian, and globalist model of the likes of Morgan/Rockefeller/H.Ford/Bush. And now, this plan is nearly complete, with George Soros, Maurice Strong, and Ban Ki-moon, two nation destroying Marxists and one more coy in his rhetoric, leading the way. (And as good Marxists, of course they have used their Soviet and Nazi trained Islamists among their many pawns, coincidentally for Norquist — Soviet link — Soviet link — Nazi links.) These globalist Marxists view small government transnationalists as dupes, because that is what they are. And that is so, because where national sovereignty is broken down, global governance is there, to fill the vacuum as if by physics, but please hold that thought.

The fact of Norquist's Islamist activism is just a toss-in, here (chronological links: 1, 2, 3, 4). To wrap-up the distastefully personal display of one man as a prime example of so many who place blind faith in the business is good business, wherever you find it model, still so prevalent in the Republican Party:

How is this irrational habit pattern to be described?

Whether they realize it or not, operators such as this, functionally if not by ideology, are transnational progressives on the vanguard, wolves to herd the sheep. And their big tent is so huge, it stretches over a false vision of a unified yet somehow free world. Such conservatives find themselves supporting communitarians such as George W. Bush, who inadvertently (or by plan from the outset ) wind up supporting more and more suzerainty to world empire. But, if not the wolf and sheep allusion, does it smell fishy? 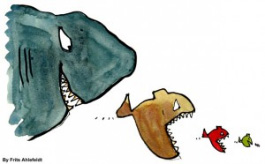 Transnationalism becomes communitarianism, becomes global communism, as the little fish nations are gobbled up by the manipulative, big fish seekers of absolute, New World Order power; all, while that ultimate power "corrupts absolutely." (If "communism" sounds extreme, just call it collectivism, neo-Marxism, or Marxofascism; it is the same. Or, if you don't like the more recently coined words, find the root and call it Babel.)

Now, thankfully, we have gotten well beyond a singling out of the illustrative Mr. Norquist — plenty of fish in the sea of the power brokering of conservatives' hard work and trust. But where ranks the salvaging of our very existence as a free nation, on the list of CPAC priorities?

Overriding or deconstructing the fact of the American nation is treason and we have been warned about it from all prior generations. Realizing this shows we need a new paradigm in the Soft War against American Sovereignties* — the real paradigm. Words without a objective core, such as "conservative" and "liberal" do not fit American vs. anti-American conflict. Conservative transnational... conservative communitarian... please.

The true contest breaks between those who stand for authentic America's Sovereignties and resultant freedoms,* versus those who uphold any number of bait-on-the-hook ideals of globalism and for whom America is in the way and must be "fundamentally transformed," inevitably reduced, like a sauce in the pan. 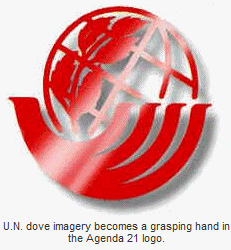 So, CPAC activists and C-word onlookers: what do you know, of what have you warned others, about the global, "sustainable development" plan of Agenda 21? It is being imposed upon our local neighborhoods, after all. "Think globally, act locally" is not merely bumper sticker.

What of the rest of the standards of violence to our nation, such as the "Global Governance 2025" plan, or the "Law of the Sea Treaty?" "Intergovernmental Panel on Climate Change?" Or, "Treaty on Small Arms?" How about the U.N. Convention on the "Rights of the Child," their efforts for a global "Treaty on Women?" Or, have you glanced at what our dictatorially imposed "czar" infrastructure is doing, to connect with global governance and "seize the future?" There is more.

We must realize the war waged against us and... fight that war. Determine who would truly represent us, through dynamically renewing America, of, by, and for our Sovereignties, then push with those spearheads. Know and warn of the real threat, because it has "progressed" much further than a threat. If we fail to change accordingly, we charge into the burning store we run, only to change the clothing on the mannequins in the windows.

The Republican Party, along with the U.S. Chamber of Commerce, and the bed of corruption that is the Managed Funds Association, as many institutions, must be enlightened and reformed, disciplined to reality and truth, or be politically and legally purged — or be replaced. Our entire view of the world and ourselves in it, must be refined in reality.

Too many gave their lifeblood, for this soft insurrection to continue without our lives put on the line seeing where the line must be drawn.

If we fail, where else will the war be fought?

* The American Sovereignties include:

They all must remain, hard, fast, and true, if "government of the people, by the people, for the people, shall not perish from the earth."