December 6, 2011
It was my privilege to record an interview with Rick Wiles of TruNews.com about the Disappear a Dissident (a.k.a., "Suspected Terrorist," a.k.a., "belligerent" in the "homeland") provision in the Defense Authorization Bill that passed the U.S. Senate last Thursday, by a 93-7 vote. It now awaits Congressional conference and a remedy is possible, if enough pressure is put on Congress. Here is a page that makes it easy to find the contact information for one's Senators and Representative: at contactingthecongress.org.

I do humbly suggest the listen. Rick Wiles' report and our discussion is broadcast on the evening of Tuesday 12/6, at the TrueNews site, or via certain short wave radio frequencies there listed: 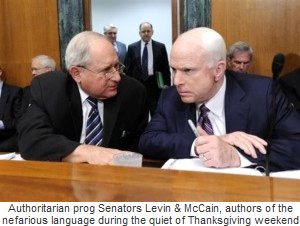 During our conversation, I promised notes and links to appropriate facts and analyses and here we are. Some of these items overlap; they are presented for the choice of our visitors.

Gulag Bound's article of warning last week is:
An analysis and contextualization of the passage of this bill is found at:
Here is a way I found, to communicate to one of my Senators from Wisconsin:
This is perhaps the most troublesome portion of the bill [Subtitle D, Section 1031(b)(2)] where ambiguity is not our friend. Never mind that even real al-Qaeda terrorists could be American Citizens. And are any who conspired in 9-11 still around at all? Is that what is called "pretext," Uncle Sam?


"...including any person who has committed a belligerent act or has directly supported such hostilities in aid of such enemy forces."


This is its context:


SEC. 1031. AFFIRMATION OF AUTHORITY OF THE ARMED FORCES OF THE UNITED STATES TO DETAIN COVERED PERSONS PURSUANT TO THE AUTHORIZATION FOR USE OF MILITARY FORCE.

(a) In General- Congress affirms that the authority of the President to use all necessary and appropriate force pursuant to the Authorization for Use of Military Force (Public Law 107-40) includes the authority for the Armed Forces of the United States to detain covered persons (as defined in subsection (b)) pending disposition under the law of war.

(b) Covered Persons- A covered person under this section is any person as follows:

(1) A person who planned, authorized, committed, or aided the terrorist attacks that occurred on September 11, 2001, or harbored those responsible for those attacks.

(2) A person who was a part of or substantially supported al-Qaeda, the Taliban, or associated forces that are engaged in hostilities against the United States or its coalition partners, including any person who has committed a belligerent act or has directly supported such hostilities in aid of such enemy forces.

(c) Disposition Under Law of War- The disposition of a person under the law of war as described in subsection (a) may include the following:

(1) Detention under the law of war without trial until the end of the hostilities authorized by the Authorization for Use of Military Force.

(3) Transfer for trial by an alternative court or competent tribunal having lawful jurisdiction.

(d) Construction- Nothing in this section is intended to limit or expand the authority of the President or the scope of the Authorization for Use of Military Force.

(f) Requirement for Briefings of Congress- The Secretary of Defense shall regularly brief Congress regarding the application of the authority described in this section, including the organizations, entities, and individuals considered to be 'covered persons' for purposes of subsection (b)(2).


And just whom do the U.S. government regard as suspected terrorists and belligerents?

Among many well chosen items cited in Sher Zieve's article is this apparent attestation from a law enforcement officer, regarding those to be targeted as potential or suspected terrorists, as the U.S. Department of Homeland Security continues to indoctrinate, pressure, and train. This comes via PatDollard.com and originates at Survival Blog, March 30, 2011, excerpted here:


Beware of Homeland Security Training for Local Law Enforcement, by An Insider

I've been in law enforcement for the past 18 years. I have attended a variety of training over those years. During the 1990s, most training I attended was community-oriented, sponsored by local agencies or private companies specializing in police training. Themes common to training of the past included topics such as Constitutional rights, community partnerships, youth-oriented programs and problem-oriented policing.

During the past several years, I have witnessed a dramatic shift in the focus of law enforcement training. Law enforcement courses have moved away from a local community focus to a federally dominated model of complete social control. Most training I have attended over the past two years have been sponsored by Department of Homeland Security (DHS), namely the Transportation Security Administration (TSA) and Federal Emergency Management Agency (FEMA).

No matter what topic the training session concerns, every DHS sponsored course I have attended over the past few years never fails to branch off into warnings about potential domestic terrorists in the community. While this may sound like a valid officer and community safety issue, you may be disturbed to learn how our Federal government describes a typical domestic terrorist.

These federal trainers describe the dangers of "extremists" and "militia groups" roaming the community and hiding in plain sight, ready to attack. Officers are instructed how to recognize these domestic terrorists by their behavior, views and common characteristics. State data bases are kept to track suspected domestic terrorists and officers are instructed on reporting procedures to state and federal agencies. The state I work in, like many others, have what is known as a "fusion center" that compiles a watch list of suspicious people.

So how does a person qualify as a potential domestic terrorist? Based on the training I have attended, here are characteristics that qualify:

A recent training session I attended encouraged law enforcement agencies to work with business owners to alert police when customers appear to be stockpiling items. An example was given that a federal agent was monitoring customers at a well known hunting and fishing retail outlet and noting who was purchasing certain items.


Presented at Noisy Room are the December 1st insights of Oath Keepers' founder and president, Stewart Rhodes, as interviewed by Alex Jones (three parts/pages in YouTube). In it, Rhodes, a true legal scholar, is to be carefully heeded and Jones, highly learned in the school of hard but not yet brutal knocks, is not to be discounted.

For further reading as to how this came about in the U.S. Senate, last week, including tallies of who voted for what, one may visit the following.

Tuesday, November 29
Thursday, December 1
Friday, December 2
Saturday, December 3
The problem with this bill (and almost all bills that mention the word "terror," "terrorist," "terrorism," or "war on terror," like the misnamed Patriot Act) is that terrorism is a tactic, not a person or group of people. By a strict definition of "terrorism," some tactics employed by the US army could classify them as a "terrorist organization," but that's not the point. Since "Terrorism" is a tactic, in order to call someone a "terrorist," you need to give that person a fair trial and prove beyond a reasonable doubt that the person in question did in fact use terrorist tactics. Bills like this give the US Government the ability to skip that step and classify someone as a "terrorist" arbitrarily without a fair trial, which is no different than giving the Executive branch the power to call someone a murderer and execute them on the spot. Once you start going down that path, the potential for abuse is catastrophic! Section 1031 needs to be removed.
(*) And finally, also from Saturday, December 3, a net-radio program I recommended during the conversation with Rick. It is a very important case study regarding another travesty, showing just how the American news media is controlled at will:
© Arlen Williams