Arlen Williams
MARITIME ATTACK: Law of the Sea Treaty in US Senate for approval

May 16, 2012
Contributors: volunteer activists of the Sovereignty Campaign — @SovCam

The U.S. Senate Committee on Foreign Affairs is once again diddling with the ultra-massive U.S. sovereignty and communitarian wealth giveaways known as the United Nations Convention on the Law of the Sea Treaty (UNCLOS or LOST). Whenever one sees "communitarian," one may think "global communist."

Neo-Marxist Saboteur Barack Obama's State and Defense Departments (including numerous compromised, NATO-head officers) are pressuring the Senate to adopt this travesty after years of resistance dating back to Ronald Reagan's presidency. If the committee goes forward with it, they could choose either of two paths: 1. the honorable and traditional congressional method of holding hearings, or 2. "fast-track" it, in order to slip voting through with as little light of day or time for the People to react, as possible.

The Senate is still Harry Reid's crypto-Marxist Senate, and this committee's chairman is John Kerry, so LOST may pop up for a vote like a rapist plunging from behind the bushes in the dark, within the next few days.

Recent and upcoming reports may be found at Heritage.org: "heritageaction.com/tag/law-of-the-sea-treaty." Gulag Bound will also continue to monitor: "gulagbound.com/tag/un-convention-on-the-law-of-the-sea-unclos-or-lost."

For other sources, see in Investors.com, "Obama Seeks Sovereignty Surrender Via LOST Treaty," May 8, 2012; in U.S. News & World Report, "Kill the Law of the Sea Treaty," May 10; and at Breitbart, Daily Caller, or American Thinker, "American Sovereignty: LOST at Sea?" by Ken Blackwell and Bob Morrison, May 14.

Perhaps the most thorough of the most recent articles is found at Liberty News Online, "The Creature from the Ocean's Floor — the Law of the Sea Treaty," by John W. Wallace, May 15. We hope Mr. Wallace does not mind our excerpting it at length.


The Law of the Sea Treaty (LOST) was first conceived in the early 1980's by the United Nations as a method for them to gain control of most of the activities on, over, and beneath the ocean's surface. The fundamental premise of the Law of the Sea Treaty is that the resources on the ocean's floor belong to all of the people of the world and those resources should be protected and controlled by an international organization like the United Nations. Although that may sound like a noble goal, in order to achieve this goal, the United Nations has created a multinational, bureaucratic creature called the International Seabed Authority ("ISA") and charged this entity with regulating and controlling the world's mineral resources in the oceans.

When President Reagan was president, he objected to several of the treaty's provisions that would have resulted in surrendering our nation's sovereignty and refused to sign it, but that didn't stop the proponents of world government and the New World Order. In 1994, the "progressives (a nice term used to describe communists) at the United Nations decided to keep moving forward with their plans by creating a diversion they called an "Agreement of Implementation" that was supposed to address the concerns of the United States and other industrialized nations. It didn't change anything. This new agreement was all smoke and mirrors, but our Oxford educated, globalist president Bill Clinton signed it anyway. The Senate, however, refused to ratify it, as required by the U.S. Constitution.

Proposed regulations in the new Law of the Sea Treaty will require private companies that want to conduct exploration and mining operations in international waters to submit substantial application fees to the UN's International Seabed Authority (ISA), which in turn would allow the ISA to use these application fees to partially pay for its own mining efforts through its own mining subsidy, called the Enterprise. Corporations from member nations operating in international waters would have to pay annual fees and even be taxed to pay a percentage of their profits to the ISA. These corporations would also be expected to share their mining and navigational technology with third world countries to ensure that opportunities aren't restricted to more technologically advanced. This is insane. The decision to grant or to withhold mining permits in international waters would now be decided by unelected, globalist bureaucrats at the United Nation's International Seabed Authority (ISA).

The Treaty would essentially give the United Nations, a notoriously corrupt, anti-American, anti-capitalist and un-democratic organization, the power to assert control over 70% of the earth's surface.

Using the regulations issued by the ISA, the United Nations would now be given the power to levy international fees and taxes on American companies. Mining approvals would be highly politicized and could discriminate against American operators. The United Nations would be given the power to regulate ocean research, exploration, fishing, marine environmental protection and navigation. They could even impose production quotas and licensing requirements on American fishermen operating in international waters.

The United Nations, through the ISA, would be given the power to create an international court system to render and enforce its judgments! This new system would lie outside the jurisdiction of the U.S. legal system and the U.S. Constitution, leaving American citizens and businesses at the mercy of international tribunals whose corrupt UN bureaucrats could subject them to Sharia Law or other non-Western legal traditions.

The Treaty calls for prosperous member nations like the United States to provide financial and technical assistance not only to developing countries, but also to "people who have not attained full independence or other self-governing status" (codeword for groups such as the Palestinians).

The Treaty would do irreparable harm to U.S. military and intelligence operations and would force the United States to hand over proprietary technology to less developed third-world countries, many of whom are actively hostile to U.S. interests. Giving up the U.S. Navy's long established primary mission of "maintaining freedom of the seas for all" and handing it over to a historically corrupt organization like the United Nations should be unthinkable.

The most important objection concerns Article 314 of The Law of the Sea Treaty (located in Part XVII) that empowers the LOST member Assembly, dominated by nations of the developing world, to amend the terms of the treaty over the objection of any individual member state. In other words, the terms of the treaty could be changed significantly and the United States would have to abide by those changes without the U.S. Senate having the opportunity to consent to the changes. This undermines U.S. sovereignty and is clearly unconstitutional.

The Law of the Sea Treaty creates a new United Nations' worldwide bureaucracy that will create a whole new restrictive system of destructive environmental regulations that would be costly and counter-productive to American businesses, while at the same time, handing over the hard-earned, American taxpayer money to many of our enemies.

The socialists, Marxists, globalists and other supporters of the New World Order keep pushing for this treaty. Senator Harry Reid has indicated that he might reintroduce the treaty in the Senate for a vote in the near future and Barack Obama, our socialist President, who is a long term advocate of the Law of the Sea Treaty, has indicated that he will sign it if passed by the Senate.


The Coalition to Preserve American Sovereignty has brought an open letter to the senate, coordinated by Frank Gaffney, with the signatures of nineteen notables. This letter is featured in The Minority Report, which would also expose a separate, false-hood front group calling itself The American Sovereignty Campaign, purporting itself as pro-sovereignty while lobbying for LOST. The American Sovereignty Campaign — interesting — almost as if someone's email or telephone conversations were caught. Oh well. It is a common practice for immoral Marxists and other ideological movements sponsored by the kleptocratic central bank complex to either attempt to control their opposition, or to set up an operation posing as a faction of it. 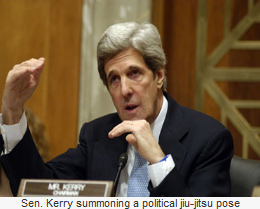 It is again time for immediate and forcefully amassed communications to U.S. Senators of all kinds, even their numerous Fabianists. A two-thirds majority is required to approve a treaty, but these people are being heavily pressured by the kleptocracy and their globalist co-conspirators.

Leaders
Democrat majority members
Republican minority members (to be contacted and watched with no less diligence)
Another response, though typically of lesser impact, a petition to the senate is being sponsored by conservative PAC, Right March.

Following is notable and extensive analysis from the recent past.


Video from 2007, "CPAS LOST Issue Ad," by the aforementioned group
It is past time to move beyond fear of being called a "conspiracy theorist" by pointing out the past, present, and impending future of the concerted efforts of globalist movements and the criminal financial powers behind them. If you agree, please see the activist organization of which we who have prepared this article are a part. If you agree with SovCam's Mission, join us.

And call your two senators. If they are not on the Foreign Affairs Committee tell them to have a chat with those who are. Since America's well-being and vital sovereignty require this treaty to never be approved, so do their careers.