September 12, 2013
The following classified photo has been released to GulagBound.com by "Anonymous" hackers. Ostensibly, it shows preparations for the planned U.S. strike upon Syria, apparently to be personally inflicted upon its President Bashar al-Assad.

This is believed to reconcile John Kerry's comments regarding the "unbelievably small" size of our anticipated, ultra-surgical attack, with Barack Obama's "[no] pinpricks" qualifier, in his Tuesday evening speech. 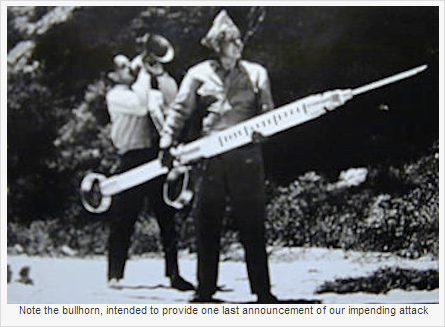 Note the bullhorn, intended to provide one last announcement of our impending attack

The key quotes are as follows, apparently some kind of code language intended to signal to the rest our alliance (France) the nature of our attack.

Kerry: "That is exactly what we're talking about doing – unbelievably small, limited kind of effort."

Obama: "The U.S. does not do pinpricks. Our military is the greatest the world has ever known. And when we take even limited strikes, it has an impact on a country like Syria."

An unsubstantiated leak indicates this strike will be code named either, "Operation Assad Example," or "Operation Big Stick." Some speculate it may have actually been planned for over a year, a cryptic reference given in this peculiarly timed announcement by "Timeless Joe" Biden (rumored to yet be vice president).


(CBS video)
However, it has also been opined that Biden's utterance referred to knowledge of Obama's private life, also documented by investigative journalist, Wayne Madsen and by the attestations of one Larry Sinclair in his book, Barack Obama & Larry Sinclair; Cocaine, Sex, Lies & Murder?

Gulag Bound has no knowledge of the contents of this new weapon, any more than what... fully... exists in the heads of any of the aforementioned politicos; perhaps some new advancement in the administration's weapons of mass confusion. By the same token, we have no idea of what was in these Syrian syringes, either.

To skirt the NSA's electronic transmission tracking and decryption capabilities, the photo was printed and slipped under Gulag Media's office door, with a note directing us to keep an eye on a nearby hotel balcony. Further news came to us there, via smoke signals issuing from the lips of someone wearing a Guy Fawkes mask, his or her communique prefaced: "Bad trip, Syria."