Arlen Williams
Refusing to vote for 'the lesser of two evils?' A thought experiment for you 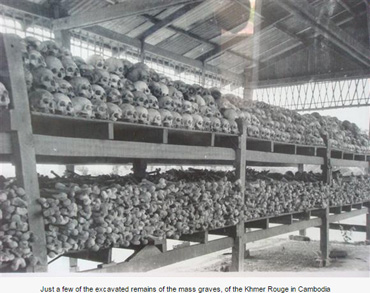 One inclined to turn up his nose against "lesser of two evils" voting might consider a thought experiment. For the sake of clarity, consider what would appear to be a more extreme case than what we are currently experiencing in America. Want to consider evils? Let's do.

What if you were one of the many citizen sovereigns charged by God to rule your nation, but it deteriorated so badly that the general election for president (or your senator) consisted of only two candidates who had a chance to win:


One of them is collectivist Pol Pot, who in Cambodia quite effectively fulfilled notions of evil by directing the systematic murder of up to two million of his own people, typically by starvation. That was approximately one-fourth of the population. Now there is someone on the "progressive" end of the spectrum who tends to clear the air. He did other evil things, but let us leave it at this.

The other is Josip Broz "Marshal" Tito, the relatively benevolent, however corrupt, communist leader of the former Yugoslavia, who set up buffers between his people and the brutal hegemony of the USSR.


You realize your vote is likely to make the difference in the murder of up to twenty-five percent of your fellow citizens in your country. What would you do?

Whatever you think of candidates who enable and enforce America's own death culture, including the murder of over a million unborn children per year, consider the following. Please reflect that the comparative circumstances of our conditions now in the good ol' U.S. of A. and this hypothetical may seem very different, but a critic of the direction America has been headed would say the difference is essentially by degree, not quality, would he not? And if it were a qualitative difference, that would still make the voting dilemma in the reality of our America a matter of dealing with candidates less evil, not more.

What would you do?

(I mean for the general election – besides becoming very involved in one of the two parties' candidate nominating processes, while getting state constitutions changed to mandate the runoff electoral system – hints.)

For more on the subject, I would humbly suggest, "The Sting of 'Lesser of Two Evils' Voting; a Case out of Montana," October 18. Let us make the difference we can make and buy ourselves some time, in order to restore authenticity to the United States of America. At the very least, as we say in Twitter, #FlipTheSenate.