March 28, 2016
My recent story, Boy Scouts of America Not Liable in Sodomite Leaders' Rapes, was no sooner published than this angry email was fired off. The writer, Eric Carlson, whom I've never heard of, took a defensive posture to my story and not only raked it over the coals, but demanded that I "retract and rewrite that article." Really? 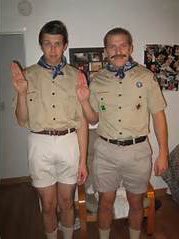 The story was totally factual, every line of it. The responder was so protective of Boy Scouts of America, that it was assumed he was an executive of that organization, or, more probably, a roaming LGBT participant. Below is the email intact so you can come to your own conclusion: His email address might shed some light.

I am shocked by your article on the rapists praying on the youth in the Boy Scouts of America. I am sure you are aware that the BSA's 2 deep leadership policy is in place specifically to prevent these things from happening. Obviously, this was not being enforced by the parents, other leaders, or youth where these horrendous acts took place. Further, I am sure you are aware that the BSA backs charter organizations who are responsible for securing proper adult leadership. It is not the BSA's responsibility to scrutinize every action of every adult leader. The Charter Organization is responsible for selecting an appropriate role model to act as scoutmaster, or any adult leader for that matter. Again, the BSA maintains a strict requirement for two deep leadership to ensure that boys are not left alone with adults where they can be lured into these grievous situations. Pointing the finger at the BSA is an affront to the efforts of the global scouting community. If you want to point fingers, point at the charter orgs, or the adults who commit the crimes, not the organization that makes every effort, including background checks on all adult leaders, just to make a grand standing statement. Shame on you. You are not acting very Christlike,, Mr. Miles. I am not even sure you are worthy of the title "Reverend." If you have any dignity at all, you will retract and rewrite that article appropriately. – Best regards, Eric Carlson.

First I must caution Mr. Carlson about making disparaging public comments about me, the ministry God has entrusted into my hands, or my title, which I am more than qualified to hold.

My sworn duties as a minister of the Gospel are to:

2.) Be a defender of the Faith

Number one is validated as this ministry has added countless souls to the kingdom. I am fulfilling number 2 in being a defender of the faith, in other words taking a stand against the enemies of Christianity and the church. This is why I write the columns I do about Obama, who is the greatest enemy of the church and Christianity in history. And number three, the subject of sin, which is an area that most ministers today will keep quiet about: I am NOT a "politically correct" minister, meaning that I will not hide something under the carpet because someone might be "offended." I will confront sin, address the subject, and work to turn people from it. I will not wink at sin.

And who is Eric Carlson? In checking it seems that he is a secular scientist, was once an award winning Eagle Scout, and is a heavy contributor to Boy Scouts of America. We're still researching to see if he holds an office in BSA. And we may check LGBT since there is still some mystery about Eric Carlson, who tries to cover up who the perpetrators are that have given pedophiles total access to little Boy Scouts.

Not sure how well educated he is, due to the severe spelling error on the first line in which he refers to "rapists PRAYING on the youth in BSA." That word correctly is PREYING , Mr. Carlson. A refresher course may be helpful.

And let us make this clear once again. Mr.Carlson postulates that everyone else is responsible to prevent child abuse but in no way is the Boy Scouts of America responsible. Excuse me sir, or madam (not being flippant, but by the respondent covering up for the homosexual pedophiles, we are not sure).

The Boy Scouts of America Executive Offices LIFTED THE BAN against having homosexuals become scoutmasters, when before, all Scout Leaders were REQUIRED to be men of moral character, conduct, and ethics as an example to the recruits. The only cause of the sodomite rapes is the Boy Scouts of America Executive Leaders, who swung open the doors to allow pedophiles to have unlimited access to little boys that they lusted for.

And by the way, it is indeed BSA's responsibility to scrutinize every action of every adult leader. This is a no-brainer. In any case, here is another example as to why parents should FORBID any little boy in the family to join Boy Scouts of America.

To see the original story as it was published, check this link: http://www.renewamerica.com/columns/miles/160325

Photo Caption: Scoutmasters: What do YOU Think?