September 1, 2010
The following is an excerpt from chapter 12 of black commentator and author Ron Miller's new book SELLOUT: Musings from Uncle Tom's Porch. You can read about Mr. Miller's background here. Many thanks to Mr. Miller for his permission to reprint this material.

Excerpt from chapter 12 of SELLOUT, by Ron Miller

"Of God and Caesar" 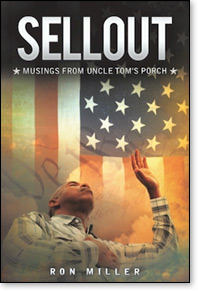 ...A lot of Christians and churchgoing people were swayed by Obama in the last election. Well before he announced his run for the presidency, Obama declared that the Democratic Party's hostility toward people of faith had to end if they ever expected to regain political power.

He was the first Democratic candidate since Jimmy Carter to make so strong an appeal to the faithful of American society. He managed to persuade quite a few evangelical Christians and some prominent pro-life advocates that he was a different kind of Democrat who would listen to them and bring their concerns to the table in the hope of finding that ever-so-elusive "common ground."

He declared to the faithful that he was a Christian and he spoke eloquently in an interview with Newsweek magazine of his coming to Christ:

At the point of his decision to accept Christ, Obama says, 'what was intellectual and what was emotional joined, and the belief in the redemptive power of Jesus Christ, that he died for our sins, that through him we could achieve eternal life... I found that powerful.'

Add to that the photo ops of him speaking from the pulpits of various churches, and many Christians practically swooned at his words, believing he was the one who would finally bring an end to the culture wars which had been raging in American society since the early 1980s.

Apparently, far too many Christians were tired of the fight and tired of the world's hostility toward them. They had lost sight of St. Paul's admonition to believers: "Let us not lose heart in doing good, for in due time we will reap if we do not grow weary." They were looking for a way out while still declaring full devotion to Christ and His teachings, and Obama offered them an escape route, or so it appeared.

President Obama clearly understands the power of faith in people's lives and sometimes he speaks the language of faith with great ease. Many Christians hoped he would be the bridge between the Democrats and the evangelical community, especially the younger evangelicals who espouse a social agenda that includes so-called 'social justice' issues including the environment, poverty, disease, and genocide, along with the traditional hot-button issues of sanctity of life and the protection of traditional marriage.

Yet many of us were skeptical of his claims, particularly since his political track record didn't reflect the influence of Christian values in his life. He was one of the most ardent pro-abortion senators in the Illinois legislature, and he used the phrase "pre-viable fetus" to dehumanize the unborn child and justify his votes against a partial-birth abortion ban.

Let's be clear about what this practice is. An abortionist pulls a late-term baby almost all the way out of his mother's womb, turns the child face down, then stabs him and vacuums out his brain. Even Sen. Daniel Patrick Moynihan, a Democrat, described it as "too close to infanticide." In fact, it is infanticide, but that didn't seem to trouble Obama's conscience.

Obama's comments in a 2004 interview with the Chicago Sun-Times led me to doubt the extent of his faith. When asked about his religious beliefs, he said the following:

When asked who Jesus was to him, Obama responded:

Jesus is an historical figure for me, and he's also a bridge between God and man, in the Christian faith, and one that I think is powerful precisely because he serves as that means of us reaching something higher. And he's also a wonderful teacher. I think it's important for all of us, of whatever faith, to have teachers in the flesh and also teachers in history.

I don't know if President Obama believes that Jesus was fully man and fully God. None of his statements that I've seen suggest that Christ is anything more to him that "an historical figure" and "a wonderful teacher." In that sense, Obama sounds like a lot of people today who refuse to embrace Jesus' divinity, even as they praise His wisdom and character.

Such folks never explain how a man they believe to be wise and good could also declare Himself the Son of God and predict His own death and miraculous resurrection from the grave three days later to fulfill His Father's plan for humankind. A man speaking in this manner today would be considered mentally ill, even if he had moments of great insight and depth.

Only with Christ do we perform the mental gymnastics that allow us to declare Him a great philosopher and teacher, while conveniently ignoring the credible claims He made about who He was and what He had come to earth to do.

President Obama acknowledges Christ's resurrection in some of his public statements, but the awesome heavenly power of that world-changing event has no effect on his rationalization that "all God's children go to heaven" regardless of whether or not they accept Christ as their Lord and Savior....

President Obama may speak our language, but he's cut from the same cloth as most liberals because he refuses to acknowledge the Bible in its entirety. During a 2006 speech, he spoke in a mocking tone about the Bible as if it was in error in some areas and not in others:

Which passages of Scripture should guide our public policy? Should we go with Leviticus, which suggests slavery is OK and that eating shellfish is abomination? How about Deuteronomy, which suggests stoning your child if he strays from the faith? Or should we just stick to the Sermon on the Mount — a passage that is so radical that it's doubtful that our own Defense Department would survive its application? So before we get carried away, let's read our Bibles. Folks haven't been reading their Bibles.

Well, I've read and reflected on the Bible for most of my life and Obama clearly doesn't understand the difference between the ceremonial and civil laws of the old covenant, and the moral law which was revealed to us in the Ten Commandments and fulfilled in Jesus Christ and His church....


SELLOUT: Musings from Uncle Tom's Porch, by Ron Miller, is available on Amazon.com. His editor and contributor is RenewAmerica columnist Anita Crane.