April 5, 2019
Bottom line, many of my articles conclude that our public schools operate at an unacceptably low level; that this mediocrity is the result of a strategy cunningly pursued by our Education Establishment for ideological purposes; and finally that the techniques employed in this strategy can be singled out, explained, and rejected. Let serious educational reform commence!

Alas, the public is perennially confused and unsure what to believe. They don't want to think badly about the people in the local school. They don't want to feel guilty about letting their children attend an inferior school. They would have no idea how to defend themselves if my conclusions are true. It's a lot to deal with. Besides, many of the gimmicks used in our public schools are like cheap magic tricks – extremely hard to figure out at first. 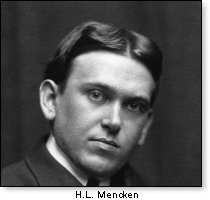 So it was a startling and pleasant surprise when I encountered a cluster of quotes from H. L. Mencken. This was one smart guy. About 90 years ago, when K-12 education had just begun to crash and burn, he said everything I'm saying, forcefully and aggressively. Obviously he was a super-quick study. Most of our media today have still not figured it out, or so they pretend.

Mencken was a famous celebrity at the time. All the smart people in the country read his columns. So we're left with this disconcerting fact – and you run into this again and again in education – that the top people had to know the gist of the machinations going on. Then, thanks to Mencken, the educrats had to realize that their neighbors also knew their scams. Did they stop? No, they forged ahead totally confident they could keep the public bamboozled and unsure what to believe. Same as it ever was.

H. L. Mencken, master of the olympian put-down, sums up education issues better than anyone else:

"The most erroneous assumption is to the effect that the aim of public education is to fill the young of the species with knowledge and awaken their intelligence, and so make them fit to discharge the duties of citizenship in an enlightened and independent manner. Nothing could be further from the truth. The aim of public education is not to spread enlightenment at all; it is simply to reduce as many individuals as possible to the same safe level, to breed and train a standardized citizenry, to put down dissent and originality. That is its aim in the United States..." (1924)

"The notion that they [the public schools] have done and are doing any ponderable good is mainly a delusion. What they have actually done is a lot of harm. They have taken the care and upbringing of children out of the hands of parents, where it belongs, and thrown it upon a gang of irresponsible and unintelligent quacks." (1933)

"I believe that it would be rational to argue that the public school, far from combating this immense increase in stupidity, has been very largely responsible for it. For the true aim and purpose of the pedagogue, and especially of the pedagogue who is also a bureaucrat, is never to awaken his victims to independent and logical thought; it is simply to force them into a mold." (1933)

The first grand effect of universal free education in the United States was to turn the American people, once so independent and self-reliant, into a race of shameless mendicants, looking to the government, as to some cosmic Santa Claus, for all their needs." (1933)

"To take a Ph.D. in education in most American seminaries, is an enterprise that requires no more real acumen or information than taking a degree in window dressing....Most pedagogues...are simply dull persons who have found it easy to get along by dancing to whatever tune happens to be lined out. At this dancing they have trained themselves to swallow any imaginable fad or folly, and always with enthusiasm. The schools reek with this puerile nonsense. Their programs of study sound like the fantastic inventions of comedians gone insane. The teaching of the elements is abandoned for a dreadful mass of useless fol-de-rols... Or examine a dozen or so of the dissertations...turned out by candidates for the doctorate at any eminent penitentiary for pedagogues, say Teachers College, Columbia. What you will find is a state of mind that will shock you. It is so feeble that it is scarcely a state of mind at all." (1928)

"I have maintained for years, sometimes perhaps with undue heat: that pedagogy in the United States is fast descending to the estate of a childish necromancy and that the worst idiots, even among pedagogues, are the teachers of English. It is positively dreadful to think that the young of the American species are exposed day in and day out to the contamination of such dark minds. What can be expected of education that is carried on in the very sewers of the intellect? How can morons teach anything that is worth knowing?" (1925) 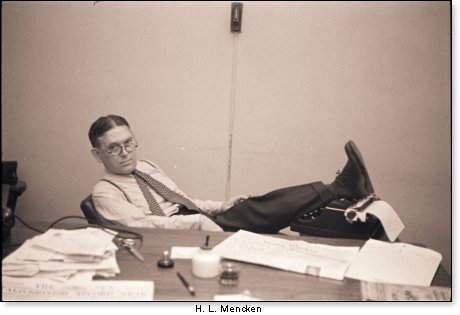 Bruce Deitrick Price's new book is "Saving K-12 – What happened to our public schools? How do we fix them?" He deconstructs educational theories and methods on Improve-Education.org.