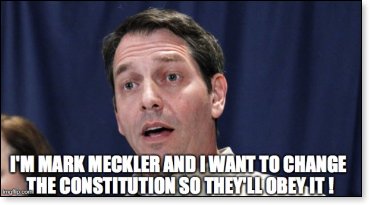 Article V of the U.S. Constitution provides that Congress is to call a convention if 2/3 of the States (34) apply for it. States "apply" by submitting to Congress resolutions passed by their Legislatures.

In order to procure Legislatures' approval on such resolutions, Meckler flatters state legislators by suggesting they are the wise ones who can be trusted to smack down the feds at an Article V convention. He also promises that legislators will have total control over the Delegates and can keep them from running amok and proposing "unauthorized" amendments or a new constitution.

So, imagine how surprised state legislators nationwide would be to learn that Meckler declared on Iowa radio recently that legislators aren't to be trusted at an Article V convention, and that we shouldn't trust any legislator anywhere!

In the segments that preceded Meckler's appearance, host Simon Conway was livid that the Republican-dominated Iowa House didn't have the votes to pass the "heartbeat" bill1; and that leadership was refusing to bring the bill to a vote so that constituents could at least hold their representatives accountable.

Meckler's first question was from a listener who texted,


Q: "[Our legislators] won't pass a heartbeat bill (and) you want me to trust them with a convention?"

But the Mark Meckler legislators know flatters them at hearings and expounds on their power under Article V. At a Nebraska committee hearing4 on February 25, 2015, Meckler said,


"...There's not a lot of common sense in D.C. But when you travel around the country, it's amazing, the common sense, and especially in a Legislature like this. You guys are inside. Maybe you don't see it. I see it as an outsider. You guys are citizen legislators. That's what the founders intended. They expected you guys to be running things. They trusted the common sense of the average person...." [p.49]

"Delegate selection, how the delegates are treated, what the authority of delegates is, is up to every state. And as an important part of that process, by the way, you're going to limit delegate authority... According to standard law of agency... you have the right to limit any [delegate's] authority to act on your behalf. If they act outside the scope of that authority, you have the right to say that they're not acting within their authority and their authority has no actual legal effect under any law...So you guys have very strong control over your delegates before...and during deliberations in the [Art. V] convention." [p.47]

So, when pinned down by ordinary citizens, Meckler says we shouldn't trust state legislators with an Article V convention. And when talking to legislators, he butters them up by telling them they are so sensible that the Framers trusted them with the power to control Delegates to such a convention!

But the Truth is that the only power state legislatures have under Article V is to ask Congress to call a convention. Period.

COSP operatives are creative in their insistence that Delegates can be controlled. They use arguments and techniques that defy our founding documents, logic, and even the dictionary. For instance,


1. They sponsor "Faithful delegate" bills which are designed to give a false sense of security to legislators who think such bills will prevent a runaway convention.

3. They promote pre-planning conventions to hammer out convention "rules" that Delegates can ignore.

4. They wrongly equate Agreements or Compacts among the States (Art. 1, Sec. 10, last clause) with an Art. V convention.

5. They use Newspeak to deny their "convention of states" is the same as a "constitutional convention" where our Constitution can be replaced.

6. They stage a 3-day "simulated convention" to "prove" that an Article V convention called by Congress won't run away and write a new Constitution.


It's about time state legislators learn that COSP uses flattery and makes false claims simply to induce them to vote for COSP applications for an Article V convention.

State legislators must reject all resolutions asking Congress to call an Article V convention. They must also rescind all outstanding applications from their states. Once a convention is convened, it will be too late to stop a new constitution with a new and easier mode of ratification from being imposed.

1 Iowas heartbeat bill would ban most abortions at the babys first detectable heartbeat.