Rev. Mark H. Creech
Life: We should choose it

January 23, 2017
Tom Carr, an educator from Hillsborough, North Carolina, who now serves on the Orange County Board of Education, wrote a little book published in 1998, titled, Morning Messages: 36 Stories to Motivate and Inspire Young People.

One story Carr records is about Shawn Hessee, a high school senior at the time of the book's writing. Carr says that he called upon Shawn to speak to a group of graduating fifth graders.

"Shawn Hessee is a remarkable young man who has won numerous awards and honors," wrote Carr. He always did well academically. He was very active, swimming, skiing, and playing various sports. "He even traveled the states playing basketball, he wrestled for several years, and he was one of the privileged few who got to carry the Olympic Torch on its way to the Summer Olympics in Atlanta in 1996. In 1995, he won the Athlete of the Year Award at the North Carolina State Games. In wrestling, he lettered twice and won awards for 'Most Dedicated Wrestler,' and 'The Heart and Desire Award.' He has won several trophies in Taekwondo, and in his senior year of high school, he received the 'Most Outstanding Person Award,' by the North Carolina Student Government," added Carr.

Carr also said in his book that wrestling was Shawn's passion. He played a huge role in getting his 1996-1997 high school wrestling team to the state finals. He practiced hard each day and was always supportive of his teammates, constantly cheering them on. Carr said that Shawn's coach, Bobby Shriner, said he was one of the most inspirational persons he had ever known. "At the end of each match, he had given his all – and as we say in wrestling, he 'left it on the mat,' said Shriner.

When Shawn gave his speech to the more than 500 students in the school gymnasium at Carr's request in June of 1997, Carr said it was "fantastic, highly emotional." Shawn encouraged the middle-schoolers to never give up in the face hardships. Listen to your parents, he told them, set goals in life, and don't let other people's negative opinions of you determine your destiny. What really counts, Shawn said, is hard work and being a good citizen in life. At the end of his speech, Carr said, "many people had tears in their eyes, and the crowd gave him a standing ovation."

But here's the clincher. "There's more to this story," wrote Carr. "I need to tell you a few more things.." Shawn, he continued, "was born three months premature and weighed only two pounds. His lungs had not fully developed, which resulted in a lack of oxygen to that part of the brain which affects motor skills. Shawn has cerebral palsy. Throughout his life, he has been confined to wheelchairs, walkers, and crutches. In spite of this early setback in life, he has accomplished so much. One of his proudest feats centers around his wrestling career. Do you want to guess how many wrestling matches he lost? He lost every one!"

According to Carr, Coach Shriner added, "Shawn may not have won any matches during his career at Orange High School, but his inspiration for all would make him a world champion on anyone's team."

I've never met Shawn Hessee. I don't know anything about him, except for what Tom Carr wrote concerning him several years ago. I did find him, however, on Facebook and it appears from what I could read, as an adult Shawn is still motivating and enthusing innumerable people to embrace life to the fullest – even in the midst of seeming impossible odds.

One of his most recent Facebook posts reads, "I want everyone to try to be kind to one another. I realize we are living in a time of uncertainty and our reaction is to lash out, but it is very important that we stay positive. I am going to find a way to do good work for this country as somebody with a disability. I have to admit I have a lot of concern for our community – frankly all people. Disability is something that can touch everyone..."

Wow! Can you imagine how impoverished the world would be without people like Shawn Hessee? Look what he's done for others despite his disability.

Yet you might not be aware that many abortions are performed every day in this country because the doctor tells the parents that their child will likely suffer a severe handicap. Some physicians even suggest terminating a pregnancy if a couple's genetic history suggests a probable or possible abnormality.

"I am frequently told by people who have never had the experience of working with children who are being rehabilitated into our society after the correction of a congenital defect that infants with such defects should be allowed to die, or even 'encouraged' to die, because their lives could obviously be nothing but unhappy and miserable. Yet it has been my constant experience that disability and unhappiness do not necessarily go together. Some of the most unhappy children whom I have known have all of the physical and mental faculties and on the other hand, some of the happiest youngsters have borne burdens which I myself would find very difficult to bear." 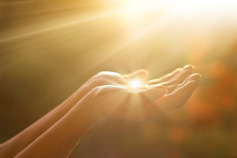 Moreover, we might add that many handicapped persons often end up contributing more to life than most people who are "normal."

In its most recent edition (January/February 2017), the Saturday Evening Post features a short interview with the incomparable and beloved comedian, Carol Burnette. In response to the question, "What fuels your terrific optimism?" Burnette shared the following:

"I lost my daughter Carrie 14 years ago to cancer. When she was in the hospital lying in pain, bald from the chemo, one of the nurses stopped me and said, 'I have to talk to you about your daughter. She is such an upper. We go in there in the morning, and if I have a long face, she cheers me up.' So I asked her, 'Carrie, how come you're always so up and cheerful despite all of this?' Carrie said, 'Every day I wake up and decide today I'm going to love my life.' The key word is decide. That was her mantra. When I wake up in the morning, I say that to myself. It doesn't always work, but for the most part I am one fortunate person and I am gonna love my life to the very end."

Yes! Life is precious – sacred at every stage – from conception all the way to the grave. Every life at every point in every circumstance is still a phenomenal gift. Except to allow it to pass naturally when there is no longer any hope for it, we should decide for life. We should embrace it. We should love it. We should choose it.