February 26, 2014
The powerful, media-fed "Gay Hysteria" machine exploded over Arizona Senate Bill 1062, which sought to protect the state's citizens' First Amendment liberty NOT to violate their conscience with regard to homosexual "marriages." Arizona's Republican Gov. Jan Brewer vetoed the bill, choosing to reward the Lying Left (the bill was terribly distorted) and cave in to political correctness rather than defend her constituents' right to live out their faith.

Few Americans realize how decades of court-imposed favored legal status for homosexuality have already stolen away our "freedom to be moral." Tragically, America is far down the road of "Criminalizing Christianity" – or, more accurately, Judeo-Christian morality – thanks to Big Gay Inc and its powerful allies in the courts, media, and academia. But what is most amazing about this Culture War battle is how homosexual activists still manage to play the victim even as more and more Americans become Real Victims of the LGBT agenda – which, at its core, is about enforcing PRO-homosexual discrimination through the State and big corporations.

The Arizona bill was simply an attempt to preempt the sort of pro-homosexual "reverse discrimination" that has spread across the country as (mostly Christian) photographers, wedding-cake makers, and bed-and-breakfast owners have been sued by LGBT militants for refusing to allow their services to be used for homosexual "marriage" ceremonies. I have documented many of these cases – and others in which Christians have suffered at the hands of homosexual militants – in my WND article, "'Gay' Power vs. Religious Liberty."


Defenders of S.B. 1062 reject the claim that the bill effectively legalizes discrimination. Proponents have repeatedly stated – including multiple times on CNN – that the bill does not allow businesses to deny service to someone at an establishment such as a restaurant or coffee shop. The law looks to protect those with religious objections from being compelled to participate in or use their creative expression in circumstances that violate their conscience. Since there is no current law on the issue in the state, lawmakers hope to preempt situations such as bakers and photographers facing legal action for not working a same-sex wedding, as has occurred in neighboring states. 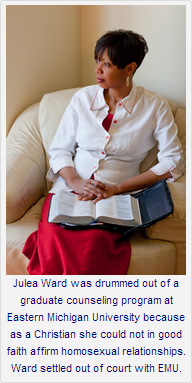 With insultingly inane comparisons to Jim Crow laws, CNN and others on the pro-LGBT Left are "going there" with their spurious racism analogies – conveniently ignoring that skin-color prejudice and biblical morality are completely different things. Do the media know or care that Blacks who believe Scripture that homosexuality is wrong repeatedly have been victimized by "gay" activism – which posits that approval of "gayness" and same-sex relationships trump one's personal religious and moral beliefs about sex and marriage?

Take the case of Julia Ward, who is Black and was kicked out of Eastern Michigan University's counseling program as a grad student because as a committed Christian she could not counsel same-sex couples in a manner that affirms homosexuality. Surely Dr. Martin Luther King, Jr. (who saw homosexuality as a "problem" that could be "solved") did not wage his nonviolent struggle so that Americans of color would be forced by the State to either deny their faith or be barred from various professions that now worship at the altar of homosexualism. As the late, great pastor and Culture Warrior (and former NFL linebacker) Ken Hutcherson, who was Black, said, "Don't compare your sin to my skin."

Aristotle wisely observed that it is unjust to treat unequal things equally – yet that is the essence of modern pro-homosexual/pro-transgender ideology, which treats sexual perversion and extreme gender confusion as the basis for civil rights. "Gay marriage" is a lot of things but it is certainly not "equal" to the real deal: two people of the same sex cannot produce a child on their own, and "Daddy No. 2" can never substitute for the love and care of a mother. Nor can two lesbian "moms" replace having a dad in the home. This is radical egalitarian social engineering and, sadly, innocent children are the guinea pigs.

In the same way, "gay" sex is "equal" to natural sex only in the minds of uninformed liberals and LGBT ideologues – who are forced to ignore mountains of CDC data documenting the reality that homosexual sex (especially between men) is disproportionately linked to an array of STDs like HIV, syphilis, gonorrhea, and viral hepatitis. Did you know that "the incidence of anal cancer in gay men is approximately 80 times that of the general population"? (HIV Essentials, p. 132) And that a shocking 94-95 percent of HIV cases among boys and young men ages 13-24 are linked to homosexual sex? Nature itself discriminates against homosexuality.

High-risk, deviant sexual and transgender behaviors do not deserve "equal" status – either in a court of law or a junior high sex-ed classroom. Indeed, a healthy society should be warning young people to avoid homosexual behavior, like smoking.

And yet, thanks to one politicized court ruling after another, we as a society must now pretend that homosexuality is "equal" in all respects to normal, natural, God-given heterosexuality. Say otherwise and you will be castigated as a "hater," "bigot," or "homophobe" (the current top-three LGBT smears). And if you're insensitive enough to defend the obvious truth that there are two genders (male and female) as opposed to Facebook's 56 (do I hear 60? ...65?), you could be labeled a heartless "transphobe."

Worse yet, arrogant, intolerant LGBT activists and their liberal allies are now passing laws that ban pro-heterosexual change therapy for homosexual minors – despite the wishes of the child and his or her parents. Moral freedom and sexual sanity are under siege in a nation whose highest court just 42 years ago tossed aside a claim by two Minnesota "gay" activists to homosexual "marriage" (Baker v. Nelson, 1972).

An America in which faith-motivated citizens (or anyone defending morality) can believe (privately) that homosexuality and faux homosexual "marriage" are wrong but cannot act on their beliefs is no longer truly free. Unfortunately, Arizona Gov. Brewer succumbed to the media's and homosexual lobby's intimidation by vetoing SB 1062. But similar legislation must arise in other states. One way or another, the issue of Americans being constitutionally free NOT to participate in, celebrate, or subsidize homosexuality (especially "gay marriages") will reach the U.S. Supreme Court (SCOTUS) – where either liberty or further "gay tyranny" will result.

I'm not hopeful that nine Supreme Court judges – led by committed pro-homosexual advocate Justice Anthony Kennedy – will side with liberty. Already, they have nullified Americans' right to pass laws against sodomy (Lawrence v. Texas, 2003); and against citizens' right to amend their constitution to preclude "special rights" based on homosexuality (Roemer v. Evans, Colorado, 1996). Last year, SCOTUS struck down the bipartisan Defense of Marriage Act (DOMA) using tendentious "gay" activist jargon. A parallel decision effectively rewarded California's liberal politicians for refusing to defend Proposition 8 – the amendment passed by the state's voters in 2008 defining marriage as one-man, one woman. (In 2010, Prop 8 was struck down as "unconstitutional" by District Court Judge Vaughn Walker, a homosexual.)

Hence, SCOTUS not only essentially negated the people's vote in Prop 8 but – like President Obama's Attorney General, Eric Holder – telegraphed to Democratic politicians across the nation that traditional marriage amendments need not be defended against lawsuits, no matter how popular they are in their respective states. So much for "We the People."

The big danger, in the mind of this non-attorney, is the possibility that SCOTUS could one day grant homosexuals coveted "suspect class" status, a special category of heightened judicial review of LGBT "discrimination" cases that effectively would treat and punish opposition to homosexuality under the law like racism – i.e., as anathema, to be criminalized. (This despite the fact that although the world will never behold an "ex-Black," there are thousands of former homosexuals like Dean Bailey, ex-lesbians like Anne Paulk, and former "transgenders" like Walt Heyer alive today who have left immoral LGBT lifestyles behind through the power and grace of Jesus Christ.)

Ultimately, it may come down to this: if true liberty is to survive in this Republic that professes to be "under God," a boldly conservative state like Oklahoma or Texas will need to stand up to the judicial elitists and pronounce that it will not follow tyrannical SCOTUS or federal mandates imposing legal "equality" for manifestly unequal homosexual behaviors. Such a state would assert that our First Freedom as Americans is sacrosanct – and superior to unnatural, man-made "gay rights" – because "inalienable" rights means not having the dictates of one's faith and conscience squashed by the secular, soulless State.