Peter LaBarbera
'Kvetch and Retreat': Paul Ryan's capitulation on homosexuals in the military

September 28, 2012
Republican Vice-Presidential candidate Paul Ryan's recent politically correct reversal on homosexuals in the military (to align with his running-mate) illustrates why conservatives often lose in politics by following a defeatist model of "Kvetch and Retreat," as laid out by New York Orthodox Rabbi Mayer Schiller. 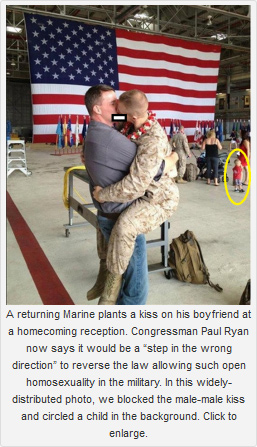 Schiller accurately observed how in political debates with the Left, conservatives typically warn of the dire consequences of a given policy as they passionately resist it. Then, if the Left wins, conservatives "kvetch" (complain, whine) about the loss — but rather than fight doggedly to regain lost political and cultural ground, they often "retreat" by accepting the new liberal status quo and moving on to the next battle.

The "Kvetch and Retreat" phenomenon — repeated again and again — results in a radically transformed society guided by liberal ideology and policy victories that morph into "mainstream" consensus with the help of the morally-challenged media and cultural elites.

Liberals take politics much more seriously than conservatives: they tightly adhere to their (misguided) principles and do battle with a long-term perspective — rallying behind their core beliefs and viewing defeats as mere temporary setbacks. A good example is their war on the Boy Scouts: after the Supreme Court in 2000 narrowly preserved the Scouts' right not to permit homosexual and atheist scoutmasters, pro-"gay" leftists did not mope around in defeat but instead ramped up their attacks on the beleaguered Scouts — painting them as "bigots" and driving them off parks and other public venues.

In contrast, there is no fight left in Congressman Ryan after the demise of 'Don't Ask/Don't Tell' (he previously voted to keep the homosexual ban). Speaking just days after addressing a conservative "Values Voters" conference, Ryan said this when asked by a TV reporter about the new pro-gay military law:


"I talked to a lot of good friends of mine who are combat leaders in the theater, and they just didn't think the timing of this was right to do this when our troops were in the middle of harm's way in combat. Now that it's done, we should not reverse it. I think that would be a step in the wrong direction because people have already disclosed themselves [as homosexuals].

"I think this issue is past us. It's done. And I think we need to move on." 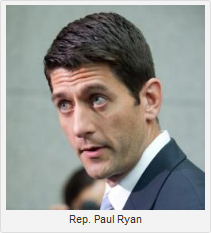 A step in the wrong direction?! Are we to believe Ryan's past opposition to gays-in-the-military was just a matter of timing? His "move on" pivot is classic "Kvetch and Retreat" — though it is telling that in their feckless capitulation to the new, LGBT-friendly Pentagon, he and other conservatives haven't even bothered "kvetching" about this momentous social shift.

No wonder homosexual activists, sensing weakness and ambivalence in their opponents, now boast that legal, national "gay marriage" is "inevitable."

Sadly, Ryan is far from alone: many Republican leaders and "conservative" pundits like Michael Medved quickly accepted the new "gay"-military policy as a "done deal," even as they aggressively demanded (and continue to push for) the full repeal of "Obamacare." Keeping pace with the "New Normal," Mitt Romney stayed true to his record as the most pro-homosexual GOP nominee ever by embracing the pro-homosexual military law in the primaries.

The rapid shift on homosexuals-in-the-military from a powerful Culture War "wedge issue" less than a decade ago to a supposed non-issue ("done deal") today begs the question for flip-flopping politicians and caving conservatives: were they misleading their socially conservative constituents back when they denounced Bill Clinton's and then Obama's efforts to homosexualize the Armed Forces — or are they mere cowards today for jettisoning core principles to accommodate the prevailing pro-"gay" zeitgeist?

To be fair, our leaders reflect us as a people, and America has changed dramatically in the last decade. In addition to the incessant media push for All Things Gay, a secular-minded rejection of historic, biblical morality has taken hold, coarsening our culture. This is manifested in movies and TV shows that flaunt indecency and crude, vulgar humor (so-called) to a degree that shocks those who grew up in times guided by modesty, self-control and respect for Judeo-Christian mores. (Compare Andy Williams to Lady Gaga.)

Nevertheless, the GOP flip-flop/betrayal on homosexuals-in-the-military is particularly painful. Astute political observers will recall that it was newly-elected President Clinton's ham-handed attempt to force homosexuality on the military in 1993 that helped ignite the conservative Gingrich Revolution sweeping Republicans into power in the House of Representatives in 1994, for the first time in 40 years.

Has the USA, which professes to be "under God," sunk so far and so fast that the societal outrage that greeted a major liberal social-sexual experiment and propelled a GOP landslide less than two decades ago is now just a quaint memory of past prudery and "prejudice"?

As opposed to politically expedient Republicans and cultural opinion-makers with elastic spines, transcendent morality is not dictated by polls, nor by political correctness. Abandonment of conservative principles based on America's noble, Judeo-Christian founding ideals only advances amoral secularism, which further erodes our religious and First Amendment liberties. We see that today with the ACLU/atheist crusade against public expression of faith in God, and the Left's attempt to displace religious liberty with State-enforced "gay rights" (and pro-abortion and pro-contraception mandates).

A nation in which sexual perversion is a "non-issue" is a nation in precipitous moral decline. Now more than ever, America needs bold statesmen who courageously lead based on unswerving, godly principles — rather than those who adjust their positions according to polls and political calculations. Kvetching on the Right is to be expected, but Retreating by acquiescing to — and even embracing — the Left's destructive orthodoxies should not be an option for conservatives who champion faith in God and absolute truth.