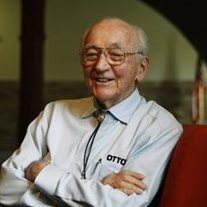 I got to know Jack long after he had achieved his business success. I remember a decade ago when he gave me a tour of Otto Engineering – which he started humbly in his basement in 1961 in Park Ridge, Illinois (childhood home of Hillary Rodham Clinton) – and which makes specialty electronic and communications products, including control switches for American fighter jets. Though by this point Jack was retired from day-to-day operations at Otto, he was hardly detached as he proudly explained the history of Otto, including products he invented that were still key to the company's success.

It was Jack's ingenuity and determination that built Otto. A friend, relaying a conversation with Jack, told how he was awarded a coveted supplier contract by simply out-hustling much larger, competing corporations and by demonstrating Otto's ability to rapidly turn around his innovative switch design. Jack was truly a classic American success story – a living testimony of what one person can accomplish in a free society that rewards hard work and creativity. [See this Breitbart tribute to Jack.]

A little-known legacy of Jack's is how Otto's continued growth and success dramatically transformed the small town of Carpentersville, Illinois, where it is based. Otto, now run by Jack's son, Tom, employs around 600 people in its beautifully-restored factory complex on Main Street along the Fox River. In 2008, Tom and Jack launched a remarkable home renovation project, Homes by Otto, that has rejuvenated Carpentersville, one gutted-and-rebuilt house at a time. It is a model for private industry and charity doing efficiently what governments the world over have failed to do despite their profligate spending of taxpayer dollars (think HUD projects). [See this FOX News interview with Tom Roeser.]

So Jack's legacy of productive and compassionate conservatism lives on through his son. I guess the apple doesn't fall far from the tree after all.

You can watch a short video celebrating Jack's fascinating life produced before his death below.

Jack was an engineering genius with more than 50 patents, but he was no fan of the Left's social engineering. He possessed the wisdom and common sense of a more grounded and God-fearing generation that instinctively knows the difference between right and wrong. Scoffing at the idea of legal "same-sex marriage," he didn't need to be convinced of the immorality of homosexuality – and the folly of promoting it through the government as a "civil right."

Jack was among a rare breed of businessmen who gave freely and fearlessly to the cause of defending sexual normalcy and traditional marriage. He and his Family Taxpayers Foundation (now Champion News) largely funded the "Protect Marriage Illinois" campaign that nearly secured a statewide ballot vote on marriage in 2006. In an age in which soulless corporate leaders are funneling untold millions of dollars to anti-Christian "LGBT' organizations like Human Rights Campaign and other sexually immoral groups like Planned Parenthood, America could use more men of principle like Jack. 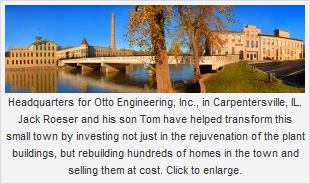 It's hard to describe in a few words what an amazing man and unique American patriot Jack was. He enlisted in the Army in 1942 and served as a Combat Engineer in the Pacific theater during WWII. Jack was generous to a fault. He was an amiable man with a great sense of humor who lived life to the fullest (he was still sailing his yacht competitively in Lake Michigan well into his eighties!).

Jack was also extremely devoted to reforming America's corrupt and bloated public education system. He and FTF published online the salaries of all Illinois teachers and educational bureaucrats, so the state's citizens could see where their tax dollars actually were going. Jack's extraordinary giving helped keep alive St. Elizabeth Catholic Elementary School in Chicago, and you can see in the video below the great passion that he felt in helping underprivileged city kids get the education they deserve.

Although many of Jack's political ventures did not succeed, Jack was far more principled than the RINO Republicans who have long dominated the GOP in Illinois. For decades, Jack fought them and even ran for governor in the Republican primary against then-Gov. Jim Edgar, a "moderate" Republican. In his last few years, Jack buried the hatchet and worked closely with the IL-GOP leadership (which of course for him meant giving generously).

Even so, in my conversations with him, Jack was consistently offended by the idea that to be successful the GOP must ditch the social issues. Ironically, that is precisely the tactic of the current Illinois Republican gubernatorial candidate, Bruce Rauner, whom Jack backed. It's easy to see why Jack supported Rauner: both championed school choice, limited government, and Rauner is campaigning on the promise of ending Illinois' status as an economic basket case – a cause that was dear to Jack's heart.

You can view my video interview with Illinois Family Institute HERE questioning Rauner's dismissive approach toward the social issues. I'm going to cut Jack some slack on this one: it's not easy doing conservative politics in the People's Republic of Illinois, where the Democrats have had most of the power for years. But in Jack's memory I will remind Illinois Republicans what in my heart I strongly believe to be true: preserving marriage between a man and a woman would still win today in this "deep blue" state if it could be put up to a statewide vote – as blacks, whites, Latinos and people of faith would rally behind it. This is why Chicago Democrats and "gay" activists like Rick Garcia were so desperate to keep our marriage-defense initiative off the ballot in the first place.

Much is made of the changing demographics in America and the "more tolerant" attitudes of today's youth – with the false assumption that greater acceptance of sexual perversion is "progress." But with the passing of the "Greatest Generation," we are losing millions of Americans like Jack who possess the common sense, self-reliance, faith, decency, industry – and basic Judeo-Christian morality – that made the United States a great nation.

Our prayers and condolences go out to Jack's wife Jeannine, his sons, Tom and Otto, and his extended family. Thank you, Jack, for a life well lived and for your many contributions to America, which will live on for decades to come. I'm glad to have known you. – Peter LaBarbera, AFTAH.org

The following video was produced by Champion News: