Lying Leatherman: homosexual atheist blogger Joe Jervis (left) didn't appreciate that Americans For Truth called attention to the vicious comments posted by his online followers against Patricia Mauceri (below right) — the Christian soap actress who was dumped by ABC's "One Life to Live" after objecting to a pro-homosexuality story line. And it looks like Mauceri is not the first soap actor to object to the faith-undermining requirements of pro-"gay" political correctness in the business. Blogs like Jervis' "Joe. My. God." give evidence that no activists are as mean and hateful as homosexual activists — who project their beef with the Creator (unacknowledged, in Joe's case) on to His followers. 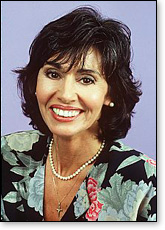 TAKE ACTION: contact ABC and tell them enough is enough with their promotion of the homosexual agenda and sexual immorality in general. Tell them you are outraged at the politically correct firing of Patricia Mauceri (right). And ask them to cast happy, contented "ex-gays" in major TV roles and sympathetic Christian/religious characters who remain faithful to their faith convictions — for the sake of diversity.

Ah, I see that Joe Jervis (above), the non-average "Joe" behind the homosexual activist "Joe. My. God." blog, has focused his intellectual energies (or should I say bigoted, emotional impulses) into crafting a response to AFTAH's post about his blog yesterday. We were simply highlighting some of his buddies' crude and very mean attacks on Patricia Mauceri, the Christian soap actress who says she was fired for objecting to a pro-homosexual story line.

Here is the essence of Jervis' response:

Let's see. Am I forgetting anything? Well, Jervis has filed his response under these categories:

Wow, you must be doing something right when your name is an actual category on several "queer" websites. (One nasty homosexualist website uses my last name as an "award" to put down other conservatives fighting the "gay" agenda.) Jervis ends with a swipe at me for not allowing reader comments on the AFTAH website, but frankly, it would require a full-time staffer just to monitor the infantile, crude and hate-filled posts that would end up as "comments" on Americans For Truth's site. And that doesn't even factor in the "gay" activists who would pose as "Christian fundamentalists" to post irrational, homosexual-bashing (even violent) comments to make conservatives look bad. (This is not to say that there are no wacky fundamentalists like Fred "God Hates Fags" Phelps out there, but AFTAH has denounced such extremism — as opposed to atheist Jervis, who stokes it on his website.)

Christians, pray for this New York City blogger Joe Jervis, a lost soul if there ever was one. The same "Jeebus" (Jesus) he and other Christian-bashers mock one day will judge them (2 Timothy 4:1 and 4:8). Homosexual activists like Jervis seem to project their own hatred — of God's moral law — against the pro-family advocates who are only trying to defend it. (Jervis has a special animus against AFTAH because our actions put a damper on the disgusting leather orgies that he supports.) Thankfully, it's never too late to cease the rebellion and come back to God; they didn't call them "gays" but there were "homosexuals" and former homosexuals in Bible times (note emphasis):

Do you not know that the wicked will not inherit the kingdom of God? Do not be deceived: Neither the sexually immoral nor idolaters nor adulterers nor male prostitutes nor homosexual offenders nor thieves nor the greedy nor drunkards nor slanderers nor swindlers will inherit the kingdom of God. And that is what some of you were. But you were washed, you were sanctified, you were justified in the name of the Lord Jesus Christ and by the Spirit of our God. (1 Corinthians 6:9-11)

TAKE ACTION: contact ABC and tell them enough is enough with their promotion of the homosexual agenda and sexual immorality in general. Ask them to cast happy, contented "ex-gays" in major TV roles and sympathetic Christian/religious character who remain faithful to their faith convictions — for the sake of diversity.