Peter Lemiska
'Tis the season to be gleeful? 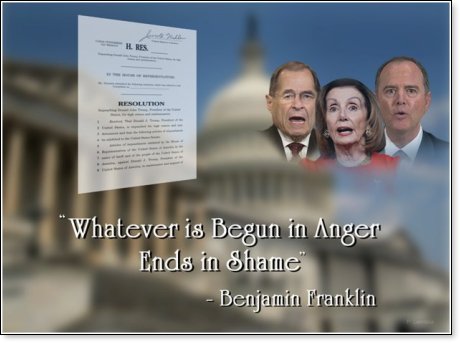 It is, as another seasonal song tells us, a most wonderful time of the year. It's a time when most people seem a little more charitable, more giving and forgiving. It's a season that brings, for most, a measure of comfort, hope, and joy.

But many today are feeling a different kind of joy, and it has nothing to do with the season.

We saw their concept of joy in the jubilant video posted by Rashida Tlaib, while enroute to vote for President Trump's impeachment. She's the one who had once promised to impeach the president in the most hateful, vile terms her fertile mind could conjure up. But when the first article was adopted, her hate changed to jubilance – until it was abruptly silenced by the Speaker. We saw their joy in the "Merry Impeachmas" tweet posted by an "objective" Washington Post reporter. And we saw it in the parade of liberal news anchors leaping to proclaim that this impeachment was an indelible stain on President Trump's legacy.

There's no shortage of merriment this Christmas season. But what these people are feeling is not quite the same joy most other Americans are experiencing. Theirs is more akin to the gloating, wanton glee that a small-minded competitor might feel toward a defeated opponent.

Of course, President Trump is not defeated. He will not be convicted in the Senate, and his popularity is rising as he continues to rack up economic and political successes. As the Democrats' underhanded tactics become more apparent, it is they who will continue to lose support.

There's a reason Nancy Pelosi has tried, albeit unsuccessfully, to hide that wanton glee felt by like-minded Democrats, liberals, and progressives. It exposes their contempt for this president and confirms their partisan impeachment had nothing to do with congressional responsibility. It was selective congressional abuse of political power, and it was spawned in 2016 out of pure hatred.

Now they're in a dilemma. Pelosi, either in utter desperation or through shear audacity, has decided to withhold the articles of impeachment from the Senate. Maybe that was the plan all along. Knowing that these frivolous, politically-based charges would go nowhere in the Senate, Democrats could, at least, appease their radical base with an impeachment in the House. Regardless of their intent, after their giddiness settles down, Democrats will have to deal with reality. The president will not be removed from office, and this angry, prejudiced impeachment charade has brought shame, not to the president, but to this spiteful Democrat-controlled House.

Making matters worse for Democrats, many constitutional authorities, including one law professor who testified on their behalf during the hearings, argue that the impeachment process is not complete until the articles are presented to the Senate for trial.

But even if Trump's impeachment is, for now, only an illusion, everyone needs a little joy this time of year. If those angry Democrats can scavenge a little bit of it during the holidays, they should relish their short-lived victory and their brief respite from overpowering hatred. Come January, Pelosi will be left with only two choices. She can present the articles of impeachment to the Senate, resulting in a speedy vindication. Or she can resume her petty, spiteful, and futile antics and watch support for her party disintegrate as more and more voters come to understand what the Democrat Party is really all about.