Peter Lemiska
Have the squeaky wheels taken over? 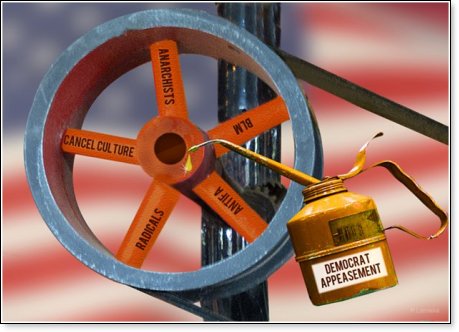 Here in America, as in all free societies, weve always functioned under a simple, but essential concept  the principle of majority rule. It has its flaws, but its vastly superior to totalitarian regimes, dictatorships, and oligarchies. When the people control their own destinies through the ballot box, they always do better than those whose destinies are determined by all-powerful rulers.

They are the dissidents, the malcontents, societys squeaky wheels. The ones who make the most noise are the ingrates. They squeal their contempt for the country they live in, but would never dream of leaving it.

It seems that theyre always the loudest in times of turbulence. They see turmoil and division as opportunities to further divide the country and push their real agenda, the fundamental transformation of the country. During the contentious Vietnam War, it was groups like the Weather Underground, Students for a Democratic Society, and the Black Panthers.

Todays malcontents are convinced that America is stuck in the 1950s, that were still an inherently racist country. They believe police routinely mistreat minorities, and that, therefore, our police departments must be abolished. They insist that all white Americans must be held accountable for an atrocity that ended more than 150 years ago; while at the same time, theyre trying to erase from existence all remnants of slavery and our racist past. They also see our free enterprise system as unfair and in need of replacement. For these and other amorphous gripes, they hate America.

So, they burn our flag, topple our historic monuments, spit on our police, and kneel for our national anthem while the vast majority of Americans proudly stand. They ensnare their following by berating and shaming impressionable, naïve young people until they, too, begin to regurgitate their anti-American rhetoric.

In these divisive times, the malcontents have become much more influential. Theyre setting the agendas in virtually every facet of our society  deciding who can speak at colleges, what they can talk about, how much to cut from police budgets, what television personalities and advertisers are allowed to say, what classical films must be banned, and what names are appropriate for sports teams,

Theyve gained significantly more influence today, though, because of the tacit, or even explicit support by like-minded politicians. Asked about the mob destruction of historic monuments, Nancy Pelosi shrugged her shoulders and said, People will do what they do. The mayor of Seattle recently ceded a significant portion of the city, including a police precinct, to a small group of radicals. And across the country, local politicians are bowing to demands to drastically cut funding for police departments. Joe Biden, the presumptive Democrat nominee for the presidency, has joined them.

It may very well be that their support for the radicals is simply a by-product of their contempt for the president, a proud American who unabashedly defends the police. Their hateful, vindictive streak was made clear by New York Mayor de Blasio. He personally helped Black Lives Matter, an admitted Marxist organization, paint their moniker in bold yellow letters directly in front of Trump Tower.

But the motives of these radical politicians are irrelevant. What matters is that the Democrat Party has chosen to lash itself securely to the squeaky wheels. Pelosi, Biden, and all the others have chosen to appease the malcontents, to acquiesce to their demands. Now theyre in virtual lockstep with their radical ideology.

If we ever hope to restore the concept of majority rule, well have to elect leaders who will abide by the will of the majority, and who will prosecute the malcontents when the break the law. Novembers election should tell us if the people have finally had enough of the squeaky wheels.