Peter Lemiska
Is this the fate of patriotism in America? 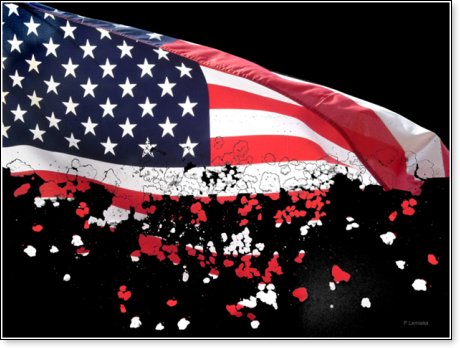 In just a few days, well be celebrating Independence Day, traditionally a day of boundless pride in America.

But somethings changed in recent years. Anti-American elements have somehow succeeded in making national pride sound like a pejorative. Many now equate it with jingoism, white supremacy, xenophobia, and racism.

Those same anti-American forces have embedded themselves in our educational system, and are teaching our children and young people that they have nothing to be proud of, that America is infested with systemic racism  that it was founded in racism, and that racism still infects every facet of our society. Many of those educators are even teaching that our capitalist system is inherently unfair, even immoral.

Working with them, hand-in-glove, is a relatively new phenomenon  the cancel culture, Americas self-appointed conscience. Those who take it upon themselves to do the canceling see our First Amendment as obsolete and use any means at their disposal, especially social media, to trivialize, marginalize, and silence opposing views.

Too many Americans have been intimidated by the cancel culture. Fearful of being canceled, they willingly abandon traditional American values. Theyre like the gutless members of the New Jersey school board in Randolph Township who thought they could appease every last squeaky wheel in their district simply by eliminating the names of all holidays. Theyre like the Colorado mayor who suspended the reciting of the Pledge of Allegiance during a trustee meeting because of direct and indirect threats.

The most dramatic change to our country, though, came in January. Thats when the reins of power were handed over to Barack Obamas protégé  a lifelong politician devoid of principles, steeped in scandal, beset with bouts of confusion, and tarnished with his own racist history. He, like his mentor, announced he planned to fundamentally transform America. Neither of them ever explained what changes they planned, or why any fundamental changes were necessary.

But Biden showed us. In just a few weeks, we went from a proud, self-sufficient nation to one dependent on other countries for our energy needs. Our once-thriving industries, closed down by a global pandemic, are now struggling to return because workers are growing accustomed to lucrative government relief payments. What began as compensation for the mandated shutdown is becoming the guaranteed income characteristic of welfare states. And our border security, along with our cherished national sovereignty, has been abandoned. This administration now allows unvetted citizens from any country to enter the United States simply by traveling through Mexico. But the most obvious transformation has come in the form of a new national obsession with white guilt, critical race theory, and fabricated claims of racial inequities.

Predictably, that obsession has even infiltrated the highest levels of our military. Many have seen the video clip of an indignant Admiral Michael Gilday defending his decision to include a controversial book on his recommended reading list for sailors.

The book argues, among other things, that the country and our military are fundamentally racist, that those who dont actively fight against racism are, themselves, racist, and that capitalism is directly linked to racism.

Defending his decision, Gilday regurgitated some of the same talking points regularly spewed out by the Biden administration, Theres racism in the Navy, just like theres racism in our country. He also offered this observation, Our strength is in our diversity. That sounds vaguely familiar to Bidens often repeated pablum, Our diversitys always been our strength. In this case, its pretty clear who plagiarized whom, since Gilday never mentioned a word about racism in our Navy in his opening remarks during his July 2019 confirmation hearing.

When a man dedicates his life in service to our country, no one can question his loyalty or his patriotism. But its become clear that the top echelon of our military and government sometimes divert a little bit of their loyalty to the man who signs their paychecks.

Sadly, pride in America has fallen significantly recently, in part because of those vast numbers of young people whove been indoctrinated – arguably brainwashed – by leftist educators. So many other citizens have likewise been conditioned, duped by political opportunists and self-serving race-baiters using deceptive and incendiary racist rhetoric. Then theres the small number who have always hated America. Theyre the ones who just need something to blame for their own failures in life.

But on July 4th, Americans across the country will again be celebrating throughout the day with picnics, parades, and fireworks. For some, its just an excuse to party. Most of us will be proudly celebrating the birth of our nation.

Patriotism is not jingoism, racism, or anything else to be ashamed of. Its the glue, the unifying force that has always held our country together. Without national pride, no country can survive. Sooner or later, it will divide into various self-serving enclaves, and eventually devolve into a third-world nation, plagued with anarchy and civil war.

The question is, can future generations be proud of the America that this administration and elements of this generation are trying to create? It would be a country rife with genuine systemic racism  a variation once labeled reverse racism. Free speech and original thoughts would be banned. And, deprived of our reliable energy sources, power outages would become commonplace. Distrust in law enforcement agencies would be the norm, and so would the ensuing mayhem.

Weve already gotten a taste of their vision, and it does nothing to inspire patriotism.