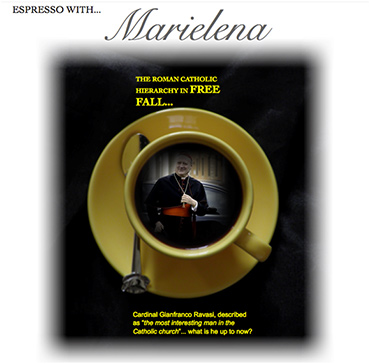 "The most interesting man in the catholic church" – WHAT IS HE UP TO NOW? 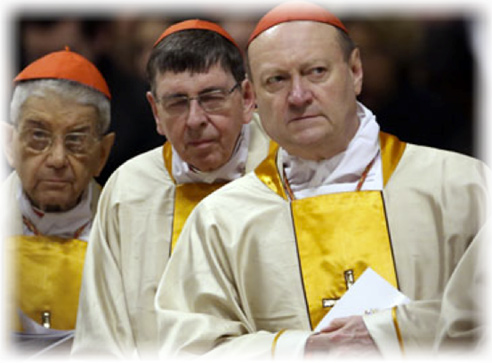 Cardinal Gianfranco Ravasi, above right, described as "the most interesting man in the Catholic church," is the President of the Pontifical Council for Culture. Cardinal Ravasi will be hosting an international conference, the TEDx Vatican cultural event, where believers and non-believers can share their ideas. Some of his fellow Cardinals, pictured above, appear to be marveling at Ravasi's "cultural taste" – which includes Amy Winehouse, Gloria Estefan and Muslim graffiti "artist" Mohammed Ali, known as "Aerosol Arabic." 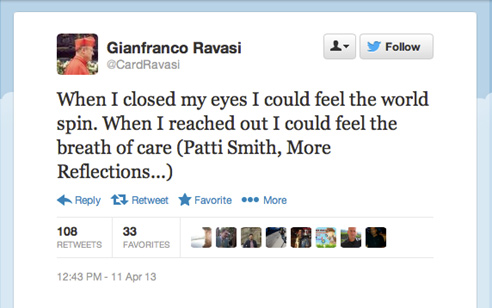 Here are some of Patti Smith's other famous lyrics, from Babelogue.

This punk rocker, Patti Smith, was named a Commander of the Ordre des Arts et des Lettres by the French Minister of Culture. That's right.

Let me know if you need another espresso...

Now that you have an idea of Cardinal Gianfranco Ravasi's "cultural" taste, you need to remind yourself that this man is the President of the Pontifical Council for Culture.

Cardinal Ravasi is an example of why the Roman Catholic hierarchy is in free fall – and why parents must make critical decisions to provide their children with proper Roman Catholic formation.

TEDx Via della Conciliazione is "an independently organized TED event" – in other words, a spin of TED (Technology, Entertainment and Design) – a global conference created almost 30 years ago in California.

The Courtyard of the Gentiles was launched on March 24-25, 2011 at the Paris headquarters of (guess where? ) ...UNESCO! surrounded by international officials, diplomats and other representatives of "culture." How charming.

In November 2003 UNESCO called abortion-on-demand a "proper" medical procedure for girls. As part of UNESCO's vicious abortion-on-demand program, on February 8, 2012, the UNESCO Chair in Bioethics at the University of Barcelona called for a national registry of doctors in Spain who refuse to perform abortions, based on "the urgent need to regulate in a practical manner the exercise of objection in the case of abortion."

Yet – "the most interesting man in the Catholic Church" chose to launch the Courtyard of the Gentiles at the UNESCO headquarters in Paris – so that we could all be "enlightened."

Let's confront this situation head on. This Pontifical Council for Culture is involved in materialistic atheism, disguised as dialogue. In other words, socialism.

As for the scientific and social dialogue program carried out by the Pontifical Council for Culture – who says that the Roman Catholic Church has to dialogue with socialists, atheists, pro-abortion and pro-gay marriage advocates – in order to learn about the latest scientific advances? The Roman Catholic Church has more than 2,000 years of scientific and cultural engagement with, and contributions to the world of science – without the need of putting materialistic atheists on a pedestal.

This type of morally bankrupt activity should serve as an indication to Catholics all over the world – as to how portions of their donations are being spent by the current Vatican hierarchy.

TEDx Via della Conciliazione will be hosted by "the most interesting man in the Catholic Church," Cardinal Gianfranco Ravasi, in Rome on April 19, under the theme of "Religious Freedom Today."

"Religious Freedom" is a poor criteria

Some of Cardinal Ravasi's confirmed "cultured" guests for TEDx 2013...

Consider who these "cultured" guests are...

Gloria Estefan, the Cuban-born pop singer, is one of the confirmed "cultured" guests at TEDx. Estefan's record of denouncing socialism and the Castro regime appeared to be consistent, that is – until she decided to honor Barack Obama in her own home, by hosting a fundraiser for him. Barack Obama is a disaster, both from the perspective of America's future – and from the perspective of his policies towards Cuba. Barack Obama is a socialist, loved by socialists around the world – and the most pro-abortion president in the history of this nation. Gloria Estefan's fundraiser for Barack Obama at her own home was a deplorable action – and certainly NOT in line with the political opinion of the majority of Cubans exiled in the Miami area, where she resides.

Socially speaking, Estefan has had a long, tight-knit relationship with the gay community – a community which she openly supports.

Gloria Estefan's very public actions described above, are not in accordance with the teachings of the Roman Catholic Church – and certainly do not represent the majority of the Cuban diaspora, politically or socially speaking.

If Gloria Estefan considers herself a member of the Catholic community, then one can only imagine that she did not read the following rules from the U.S. Conference of Catholic Bishops, before carrying out the political and social public actions described above:

The Catholic community and Catholic institutions should not honor those who act in defiance of our fundamental moral principles. They should not be given awards, honors or platforms which would suggest support for their actions." – From Catholics in Political Life (USCCB 2004).

Given that TEDx is being promoted in collaboration with the Courtyard of the Gentiles, will "the most interesting man in the Catholic Church" clarify if he is hosting Gloria Estefan as a non-believer and former Roman Catholic? – thus she is only there to do the Conga.

It is obvious that "the most interesting man in the Catholic Church" at his Pontifical Council for Culture, is not interested in having a "dialogue" at TEDx on April 19, with conservative, practicing Roman Catholics from the Cuban diaspora – who not only respect their Roman Catholic faith and traditions – but who can speak authentically about the persecution, torture, imprisonment and death of Cubans under Castro's Communist regime – from a Christian perspective.

The above scenario is only a glimpse of why Catholics have left the Church in droves during the last 50 years, feeling disheartened, abandoned and disoriented.

Mohammed Ali, aka "Aerosol Arabic" is the other confirmed "cultured" guest – whose graffiti is found in European cities, as well as in other parts of the world. It is impossible to reason how the Vatican can possibly learn from, or make any connection with this man's graffiti work – in light of the intellectual and cultural history of the Roman Catholic Church.

Perhaps it is time for Cardinal Ravasi ("the most interesting man in the Catholic Church") to read INSCRUTABILI DEI CONSILIO  (Pope Leo XIII's Encyclical on the Evils of Society) – where he warned about "the shamelessness of those who, full of treachery, make semblance of being champions of country, of freedom, and every kind of right; in fine, the deadly kind of plague which infects in its inmost recesses...."

In this Encyclical, Pope Leo XIII also stated that, "Our predecessors, to provide for the peoples' good, encountered struggles of every kind, endured to the utmost burdensome toils, and never hesitated to expose themselves to most dangerous trials. With eyes fixed on heaven, they neither bowed down their head before the threats of the wicked, nor allowed themselves to be led by flattery or bribes into unworthy compliance." 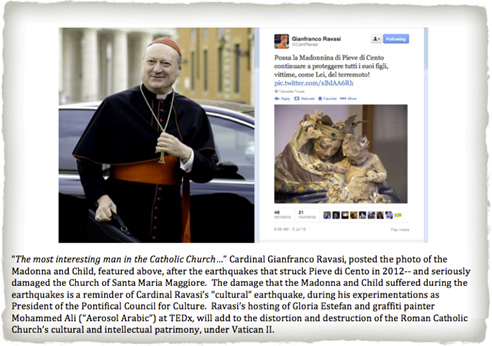 Based on Cardinal Ravasi's "cultural taste" and the absolute clueless way in which he deals with the world – I believe he is actually "the biggest fool in the College of Cardinals – and the most uninformed man in the Catholic Church." By saying this I am being kind. The other option is to simply say that this "most interesting man in the Catholic Church" is living out, at the very least, his socialist fantasies.

Come back for another 'Espresso with Marielena...' where the roast is very dark, the coffee is very sweet – and the words flow with tenacity.