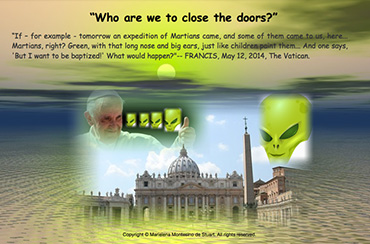 This is a joke, I thought... perhaps written by someone who had just stumbled out of a hallucinogenic mushroom festival. But no, the messages I began to receive from my readers – about Francis's inclusion of Martians in his heavenly spaceship – were actually true.

Now, this is a game changer. This elevates the concept of "inclusion" to a whole new level.

I thought it was bad enough that we had to deal with Marxists being welcomed in the Vatican. Now we have to put up with Martians too!

Some questions come to mind:


What if these Martians demand the Latin Mass? Will Francis still welcome them?

Will these Martians get along with the modernist aliens who have occupied the Vatican for more than 50 years?


Don't be surprised if you see little green men kneeling at the end of your pew. If you are a fan of Francis, anything – and I mean ANYTHING is possible.

REFERENCE: "Who are we to close the doors?"

"Francis and his Heavenly Spaceship"

"It's All in the Stars: The Vatican, Francis and Marxism"

"Francis trivializes and dehumanizes the most massive genocide in human history "

"The Impossible Colloquy between Saint Thomas More and Francis"