Marielena Montesino de Stuart
When Francis meets with Israelis and Palestinians... the explosive truth behind this story

May 26, 2014
When Francis meets with Israelis and Palestinians – will he be asking tough questions? Probably not. 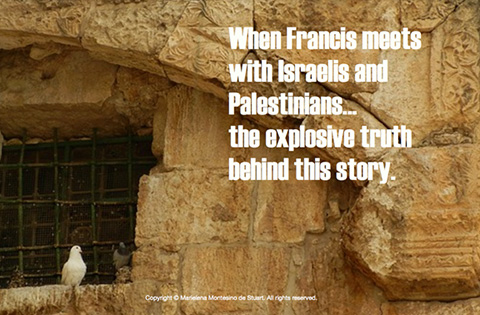 Francis has been busy this weekend meeting with Israelis and Palestinians in the Holy Land. But there is an explosive story out of the Knesset (which is presented below) that went mostly unreported by the mainstream media in the United States and Europe, just over four months ago. A story that involves shameful actions taking place in Israel, which must not be ignored during Francis's apostolic pilgrimage – for the sake of humanity.

So far, the so-called conservative politicians in Washington and most "conservative" high-profile Christians have been afraid to denounce the reprehensible situation in the Knesset.

Will Francis confront Benjamin Netanyahu, the prime minister of Israel?

Will Francis confront Shimon Peres, the president of Israel?

During his trip to the Holy Land, Francis will also meet with the president of the Palestinian National Authority, Mahmoud Abbas, a professed Marxist. But how can we expect that this would be objectionable to Francis? – given that he has stated, "I have known many great people who professed Marxism."

Reports indicate that on June 6 Francis will open the sacred halls of the Vatican for Israeli-Palestinian quasi-peace talks, under the theme of a prayer summit.

Sorry, there is no such thing as a "prayer summit" amongst people of different faiths. Not unless you are willing to bring your faith down a few notches.

You see, as Catholics we pray with devotion to Jesus, the Holy Trinity, the Virgin Mary, the Saints and the army of angels in heaven. This sustains us spiritually as we strive to become worthy of the Beatific Vision founded on Christ.

Jews and Moslems reject all of this.

The Vatican is no place for a "prayer summit" involving those who reject our faith in Christ. They are welcome to visit the Vatican on diplomatic missions – that is why the Vatican has the oldest and most sophisticated diplomatic corps in the world. But please, no inter-faith prayer summits.

In addition to the above, such peace talks will only bear bitter fruit, unless Francis is willing to rebuke the rhetoric coming out of the Knesset – and demand an apology from Netanyahu and Peres – for whatever that is worth.

The same goes for the professed Marxists in the Palestinian National Authority.

If the Israelis and Palestinians are willing to go to the Vatican and submit to Francis as their mediator – then the Vatican should set the rules. But this is eternal optimism.

Without the proper moral groundwork and conditions in place, the Holy See should not be dragged into this quagmire between the Knesset and the Palestinian National Authority – given that both sides could care less about the extermination of Christians in the Holy Land and in the entire Middle East.

And please, don't tell me that these peace talks at the Vatican should also take place for the sake of ecumenism.

We have had enough of the ecumenical disaster for more than fifty years – which has displaced the Catholic Church from its rightful place as the only Church founded by Christ, as such – the only means of salvation.

If salvation could be found elsewhere – why has the Catholic Church sent missionaries all over the world, for more than two thousand years, knowing that thousands would die as martyrs? It's time that modernist Catholics face the truth – and assert the power and the glory of Holy Mother Church.

Finally, here is what's going on... while you aren't watching. Read every word, because this is one article that will get you going.