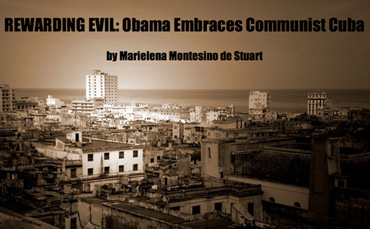 It has taken tremendous inner strength to get through the news during the past twenty-four hours.

As a survivor of Castro's brutal Communist regime I have been experiencing the pain brought about by Obama's kick-in-the-gut, with his betrayal of the Cuban people, both in exile and on the island, after yesterday's announcement of the establishment of diplomatic relations between the United States and Cuba.

The faces of my family members, who were imprisoned, tortured and executed by Castro's communist thugs, kept flashing through my mind, all day yesterday and into the night. On this note, I want to thank the kind readers and friends who have contacted me, from the United States, Latin America and Europe, regarding Obama's cowardly act – to lend their support and honor the memory of my family members – who along with thousands of Cubans died as a result of this communist abomination in the heart of the Western Hemisphere.

The last twenty-four hours have felt like leaving a funeral and receiving a string of condolences.

This is what happens when you allow a socialist to enter the White House.

My campaign for the United States Senate (on the ballot in 2012) included my repeated testimony, throughout the State of Florida, about the impending danger that Obama's socialist administration would present to this country. This was a testimony based on my life under communism – something other politicians can intellectualize – but have not felt in their own flesh.

Yesterday's announcement did not come as a surprise to me. This is part of the powerful and pernicious international socialist movement – which has been working diligently to advance its agenda for many decades.

Obama's decision to embrace communist Cuba has now freed millions from qualms of conscience – such as those who have wanted to visit the island – which they consider "forbidden" by the embargo. The truth is that the "forbidden" side of Cuba is only found in the way that its communist military dictatorship forbids freedom of speech, forbids freedom of assembly, forbids every right granted by God to all human beings.

In Cuba I was punished in school even for thinking. As a way to force my mother to enroll me in the local school, the communist authorities had denied us the little that we were entitled to receive through our food rationing cards. So, we either starved or went to communist schools.

One of my teachers was a woman who was known for her peculiar fashion choices. She would come to the classroom wearing her military uniform and a gun. She would approach my desk very slowly and ask me – with her weapon at my eye level: "Montesino! (they always address you military style) what are you thinking?

Not being the quiet type I answered, "trying to figure out how to get out of this hell before your gun goes off."

My day ended with a massive beating administered by the militant children of local communist officials. The only good that came of this is that I was expelled from the communist school. My expulsion was cause for celebration, since I had received an excellent education at home from my beautiful mother.

But I continued to refuse to comply with their demands. I felt I had nothing left to lose. After all, I was the daughter of a political prisoner.

Now, let's go back to the socialist in the White House.

What is even more offensive – beyond the absurdity of this diplomatic move by Obama – is his attitude and rhetoric.

Millions of people around the world heard the word "colonization" during his speech about Cuba yesterday – as if the United States had colonized the island. What kind of absurdity is this? Which Marxist on his staff is writing these speeches?

Is this what a law degree from Harvard results in?

During my life in Cuba, as I walked down the streets of Havana, I never saw any signs of American "colonization."

Adding insult to injury, Obama mentioned "His Holiness Pope Francis" as a driving force behind this exercise in poor diplomatic judgement. This was also to be expected. Francis has opened the doors of the Vatican wide open to Marxists, Atheists, and others – who march to the beat of the United Nations.

For nearly fifty-six years the world has watched the slow agony of the Cuban people – and very few have stepped up to the plate to denounce it. The international community has no problem uniting with vigorous opposition to programs such as Operation Condor, which was intended to eradicate communist or Soviet influence in Argentina, Chile, Uruguay, Paraguay, Bolivia and Brazil. But they remain silent when it comes to the horrors committed in Cuba.

Is it any wonder that Alan Gross, the American citizen who was finally released yesterday from a Cuban prison after five years, was met with a picture of Che Guevara at his lawyer's office in Washington DC?

Do you want to know who Che really was? He was a blood-thirsty Marxist torturer who personally signed the execution of hundreds – if not thousands – of innocent Cubans, in the political prison where I remember seeing my father for the first time.

Today, just like the day I felt alone in that classroom thinking I had nothing left to lose by speaking my mind – I feel the same. I came to the United States seeking freedom – only to find myself living in a country that is descending into a socialist abyss.

So much is being given to the military thugs in Havana – in exchange for what? The release of 53 political prisoners who could be rounded up and arrested again tomorrow?

As my thoughts wander back to the streets and the people I left behind, I think about a woman whom I knew. She had recovered the bodies of her two sons who had been executed and buried in a mass grave – for opposing Castro's forces. She secretly buried them under a field of sunflowers. She asked me to remember her, before I left the island prison. I promised her I would. I also asked her to try to recover the body of my young cousin and bury him under the sunflowers. He was also executed – three days before he was to be married. His body was thrown in a common grave. And what was his crime? He drove his friends to the seaside so they could flee.

I don't know if she ever recovered my cousin's body. I will probably never know his final resting place. But that field of sunflowers is imprinted in my mind – and I have never been able to look at a sunflower the same way again.

I have nowhere else to go. I have nothing to lose but the freedom I have left – and that's worth fighting for.


|||||||
NOTE: Please respect copyrights. You may only quote 25 (twenty five) words of this article, then provide the link to this website. Further instructions are provided HERE. Thank you.

You may contact Marielena Montesino de Stuart through the following LINK.