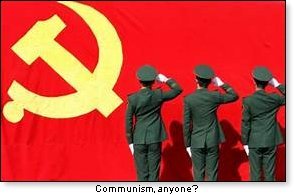 We saw this coming for a long time. And it seemed to explode extemporaneously within this last month. It had already pushed off in the United States, using the Covid-19 virus as the fuse to begin shutting churches down. These actions were attributed to pandemic orders that, due to the virus, people cannot gather.

The most threatening gathering place, say the Communist Party recruiters, is the church. The Reds know that a Christian mind cannot be enslaved. So the first thing they do is to eliminate the rights of all churches. Notice today how in Communist China they bulldoze churches and any crosses that may be in view.

And they are the ones who created and released—not accidentally leaked but released—Covid-19. Bill Gates, who works with the UN to depopulate the earth, gave $1.3 million to Dr. Fauci, who took it to the Wuhan Lab in China to create this pandemic.

One major church in America that is targeted is John MacArthur's church, Grace Community Church, in Sun Valley, California. The feds have done everything to shut his church down, including raids and lawsuits. But fortunately Rev. MacArthur is a bit bull-headed and he faces them toe to toe and is not about to budge.

We've always known that Canada is a socialist country, which is the stepping stone to Communism. For me, there has always been something off center with Canada. Now the war has begun. The Gestapo Cops have been raiding churches, some during services, demanding that people depart—and by the way, take in the following:

In the United States it is a felony to disrupt a religious service. So the next time these intruders storm a church, at least in America, immediately file charges against them with the District Attorney. I had to do that once.

So far, the police have been doing this without checkmate. Using the notion of the Covid-19 virus, they claim that Christians are putting everyone at risk by gathering for church. Perfect for the Communist storm troopers who do not want God in their area.

Pastor Artur Pawlowski of Street Church in Calgary, Alberta, was conducting a service when the storm troopers pushed their way into the church, during a service, and ordered everyone to leave or face arrest. Pastor Pawlowski, who was familiar with Communist rule while living in Poland, charged towards the cops and ordered them to leave the area immediately. They did.

Than after another service, as the pastor was leaving the church to go home, five police cars were waiting. They followed him, then with sirens suddenly breaking the sound barrier, they stopped him in the middle lane of a freeway where they arrested him, handcuffed him with his arms behind his back, dragged him down the street, and threw him down, again, in the middle of the lane of that busy freeway. He could have been killed, but the so-called police officers had no feeling about that. He represented God and the church, so it isn't important if he dies.

Next, his property was firebombed. To Pastor Pawlowski, this was a sign that someone wanted him dead. Rev. Pawlowski said that his arrest was "painful" and "actual torture," saying the entire ordeal was "unbelievable."

Meanwhile, a small "Church of God" in Aylmer, Ontario, faced a police ambush during their service, where police ordered the parishioners to exit the church, then they changed locks on the church so that nobody could come in again. The church group decided to have their services outdoors. This rankled the authorities, who fined the little church $200,000 for continuing to hold worship despite provincial "stay at home" orders.

Still not satisfied, those crazy Canucks fined that little church an additional $66,000 over Memorial Day weekend for having outdoor services which attracted some 400 attendees. The church then live-streamed online and was fined an additional $100.000 dollars.

The Crown Communist Attorney, Lisa Brost, said in court, "The church is escalating its defiance of governor edicts by continuing to hold outdoor worship service," which she described as "an intentional confrontation." "The church 'deliberately did exactly what they knew they were not permitted to do,'" Brost belched, adding she believes the congregation should be barred from appealing having their facility locked until they fully repay all the outstanding fines against them. Get that? Pay up first then you can go back into your church. Sounds like ransom to me.

So even in a Communist country, money can compel others to change their minds.

And Canada, with this latest ferocious attack against churches, has, as expected, taken the step from socialist to communist. There, it seemed to me, was always a sense of something strange in Canada, as I dissected the personalities of people I met. First of all, I met a lot of former Nazis who retired there. They were not that pleasant to talk to. While in show business, I performed throughout Canada. And that is the only country that actually booed me. And why?

I was the ringmaster of the Shriner's Circus, a huge benefit program that supports the Shriners Hospital for children. While I was performing in a major arena with a packed house, the Fire Marshall came to me and requested that I make a "no smoking" announcement, which I did. Then I added, "And to you young people here, don't even start it or even try it. You only have one set of lungs...take care of them." That resulted in resounding BOOS throughout the stadium arena. I couldn't believe it.

I let them continue the booing until they stopped. I waited another minute, then said, "Any country who would boo someone for advising young people to protect their lungs by not smoking is not ready for self-government." Things suddenly got so silent that one could hear a caterpillar doing push-ups on a lemon meringue pie.

I waited another minute, then resumed the show. There were no further problems.

Let's face it. One by one, countries are giving in to Communism. Yes, it is even in the United States, but it is not fully recognized yet—but it is getting there..

God help us all!

In closing, please be kind to any and all animals you meet. They have feelings the same as us and feel pain the same as we do.