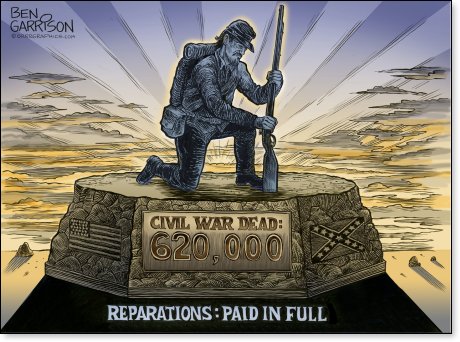 AMHERST, MA 7/11/21 This writer has always looked at New England as an area peopled with well-read, well-spoken, educated, talented folk. They know their history and who they are. You can have an intelligent conversation with anyone you meet there. Yet Amherst, Massachusetts, is the first to be cajoled into giving black folk what is called "reparations." That means a "debt" owed them due to what is charged against all whites: the mistreatment of blacks hundreds of years ago. What??

What does this have to do with present-day Amherst? Absolutely nothing. Yet people today are said to be guilty of the perceived crimes of those in the past. No one alive today has any living relatives who participated in slavery in those early years of history. Indeed, no one's living relatives were even around during that time.

The blacks are using slavery as a device to pull this off and profit by it without having to go to work. Slavery took place in America roughly two hundred years ago, even though the world itself had slaves to do their work from the beginning of civilization, but slavery is nowhere today except in Muslim countries. The Muslims captured other blacks, sold them to greedy businessmen to take to England and the United States. So blacks betrayed fellow blacks to make a buck. Thus began slavery in the U.S.

Yet Americans are told that all whites owe all blacks "reparations" due to an event that nobody had anything to do with during this day and age. Indeed most who are here today did not even have ancestors who were involved in slavery. The blacks have been pushing this for several years, while at the same time staging riots and mass destruction of property and businesses, setting homes and businesses on fire and causing overall chaos, and beating up and injuring large numbers of people. This is total savagery.

It is time to bring this up. How about blacks, such as BLM and Antifa, gathering some of their fortune and giving reparations to the white people who have experienced destruction of their properties and businesses by blacks. This would be only fair. What was stolen by forceful looting alone could get everyone back on their feet.

And what about looting? Blacks create their own stereotype, indeed all of us do. If we were to ask who is known for looting during disasters and emergencies, who would it be – Irishmen or black folk? With no hesitation, the answer would be "black folk."

It is too bad that black people have contributed to their own stereotypes with their lawlessness. They lost my support early on by their lawless conduct. I have helped many black people get placed in TV commercials; many would not have been used had it not been for me. They can't expect to get support when their conduct is so very uncivilized toward whites or anyone else.

And it is to be noted that it is the Communists who have fanned the flames between blacks and whites. They have in mind to take over the United States and put us all under Communist dominion. They divided the blacks and whites with the mantra, "To Divide is to Conquer. " In this case, turning the people against one another based on race has worked out perfectly and weakened our country.

The Communist Party intends to take over our country. That has been their goal from the beginning. The only country standing in the way of the ONE WORLD ORDER had been the United States, since the Reds know the power of the church and they know that a Christian mind cannot be enslaved. This is why there have been so many attacks upon the Christian churches in America. The church is considered a threat to the entire Communist Party.

Canada has gone from socialist to downright Communist, and churches are being raided during services and pastors dragged out, under arrest, by the equivalent of Nazi Gestapo.

It is interesting to note that both BLM (Black Lives Matter) and Antifa are both Communist organizations, which will answer several questions. Also, BLM and Antifa are very wealthy.

Many blacks want to get by as easy as possible. I once called a black man who I had trained in a ministry class and asked if he would go out into the field with me on a certain day. He said, "Why yes"! I told him to meet me at 7:30 the next morning at a pancake house. He tightened up and said, "Seven Thlrty?" "Yes, 7:30." "Ahhhh...NO....that's too much like going to work." And that's the story.

So I found a white minister who was more than happy to spend a day in ministry with me. Now remember, it was the actual black slaves who did the work during those early days here. The ones today demanding "reparations," which is an outrage, had no part in slavery or the forced work involved. But they want to be paid for it anyway as though they did. They actually feel that white people OWE all blacks everything they have and will have.

This writer can all but guarantee that when this reparation insanity continues, they will keep asking for more and more money to soothe their past "suffering."

I started this column with my admiration for the intellect and well-read character of the people in New England. I need to do some editing of that first part of the story.

The town council of Amherst voted unanimously that this "reparation" money be put in a special account to give each black person $210,000 each. This is considered "reparations" to its black residents. This is not a one-time idiotic decision. This is the official beginning of it.

However, Amherst's officials agreed to put $210,000 for each black into an account later this year. This means that other spending priorities, like local police, will have to be cut to a bare minimum. And remember, this is only the beginning. And frankly it is outrageous. Then enters every criminal to the area to loot and destroy with no strong police force to stop them.

The Communists are making certain that all American history is erased from the public memory. That is another part of taking over a country. Destroy their history. The statues of prominent confederate army officers must be torn down and taken out of sight. Doesn't matter what side they were on, those men's statues affirm the history of this nation. Can't even the worst imbecile understand this? Meanwhile, the Communists who intend to run this country will love us, since we will do everything they want us to do.

Now, back to the top: My opening paragraph states: "This writer has always looked at New England as an area peopled with well-read, well-spoken, educated, talented folk. They know their history and who they are." I request this statement be stricken from the record. 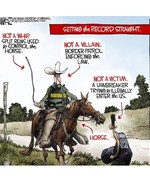