Last week I wrote about the homofascist group, Human Rights Campaign (HRC), targeting three southern states, including Mississippi, to aggressively push its tyrannical agenda of anti-Christian perversity. Homosexual activists have also responded to Mississippi having just passed and signed into law the Religious Freedom Restoration Act, which, among other things, puts in place some added protection for the free exercise of religion without "substantial" government burden. 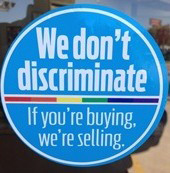 The bill that was signed into law by Governor Phil Bryant is different from earlier versions of it that also included language that would give protection from religious persecution by individuals as well as state government entities, but after activist opponents (falsely) screeched and wailed that this would lead to ill treatment of homosexuals, the language was struck from the final version of the bill.

Even though those parts were removed, and even though no reference to "homosexual," or any of the rest of the Alphabet Soup Perversity Brigade is mentioned in the legislation, homosexual activists are still waging war against the new law. Now, they have created window stickers for businesses that state, "We don't discriminate. If you're buying, we're selling." The sticker has a rainbow-colored line running through its center.

As Mississippi's new law to safeguard its citizens' free exercise of religion goes into effect, a homosexual activist group calling itself Equality Mississippi, has reacted with a "We Don't Discriminate" sticker campaign designed to vilify Christian-owned businesses that decline to help celebrate homosexual marriage.

... The sticker implies that Christians are refusing to serve homosexuals, but there is no record of such behavior. Rather Christians around the country have been sued when they declined to use their talents in celebrating homosexual weddings by creating a special cake, memorializing the occasion through artistic photographs, or creating floral arrangements.

Some businesses may display the sticker unaware that it is part of a plan to bully, intimidate and demean Christians. If you see this sticker when you go to a business, ask the owner or manager if they are aware that the sticker is the symbol of a campaign to label Christians as bigots. (This may provide you an opportunity share Christ's love and grace to sinners, but hatred of sin.)

As they do in every aspect of their anti-Christian, freedom-robbing agenda, they lie about the Religious Freedom Restoration Act, insisting it will open the door to a flood of anti-homosexual "discrimination," with Christian businesses owners refusing to do business with people simply because they're sodomites. That's not happening, but these people don't let truth or reason even come close to getting in their way, because if there were even one case of a "Christian" business owner telling a homosexual, "We don't serve your limp-wristed kind in here," it would be blaring headline news from coast to coast, world without end.

The truth of the matter is the exact opposite of how the Left portrays it. Christians are not refusing to serve homosexuals, but homosexuals are targeting Christian-owned businesses with demands that would force the owners to participate in the desecration of marriage, in direct violation of their conscience. When Christians politely refuse them, instead of going down the street to a willing business, they sue the Christians. These activists know exactly what they're doing, and their goal is not to get a stupid "wedding" cake made for two men. No. Their goal is to use the courts to strip the rights and freedoms of Christians and any others who are opposed to the militant homosexual movement's agenda, which includes the destruction of marriage.

The AFA published a list of Mississippi businesses that have signed on to place one of the anti-Christian, pro-homosexual stickers on their windows. Here's the "If You're Buying" site where you can also see the sticker and the business list as it's updated. These are businesses you might want to avoid here in Mississippi, unless you're in the mood to go inside and find out if they really understand what that anti-Christian sticker means.

This sticker is being placed in windows of Mississippi businesses with the implication that other businesses refuse to serve homosexuals. Ironically this "tolerant" sticker symbolizes a campaign to label Christians as bigots when there is no record of homosexuals being refused service, except when they try to force a Christian business to help celebrate a homosexual wedding.

We believe that Christian business owners have the inalienable right to obey their conscience and refuse to participate in or provide services for homosexual weddings or any other activity they see as inherently sinful.

That's pure truth, but our inalienable rights will not stand if these homofascists get their way. Freedom of conscience, religion, speech and association for Christians is directly in the evil cross-hairs of this diabolical movement, and unless we stand firmly, loudly and unified against it, our freedoms will be crushed. Don't doubt it for a minute.