March 31, 2009
"In the past generation, it was Buffalo Bill. For this generation, it was Knute Rockne. The boy had a great respect for Rockne, and Rockne for the boy. Each read the other's mind, and they were heroes to each other. Millions of boys (and men, girls and women) bow in grief at the news that Rockne is dead, because for millions he was greater than the president."
 Cleveland Free Press 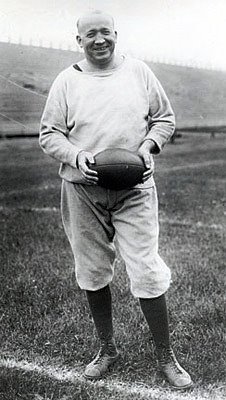 Reflecting on the anniversary (3-31-31) of the tragic death of the immortal Fighting Irish football coach, Knute Rockne, and on the lesson his legacy could teach us in light of the current Notre Dame-Obama invitation situation, one facet of his heroic life stood out among all the others. For while my Top Ten Eulogy Telegram List will give you a good glimpse of the impact Rockne's life and sudden death (perishing in a plane crash at the age of 42) had not only upon football fans, but the whole nation, I've rewritten #4 because I believe it was Knute's relationship with youth that best summarizes what "Rock" gave to Notre Dame, and best depicts what the school now lacks  and must get back  to successfully resist the invasion of Barack ...

More than for any other coach in history, it could be said that Rockne and his boys positively affected one another. With the football team it was obvious; not only did Rockne (whose 105-12-5 record is still the best winning percentage in college football history) have a stellar impact on his lads both on the field and off, but his players' devotion to their faith (Rock marveled at how they attended early morning Mass even during the away games when there was no priest to prod them) directly led to a deepening of Rockne's own relationship with Christ, including Knute's conversion to Catholicism in 1925. But Rockne's flair inspiring kids  coupled with his ability to lead the Irish to victory  soon made him a role model for youth (both Catholic and not) across the country  and started a trend for devout (and athletic!) Catholic boys (and later girls) to attend Notre Dame that only recently has subsided.

While Rockne (as depicted in Sports and the Catholic Fan) must be credited (along with then University president, Fr. Charles O'Donnell) with getting the faith and football combination rolling with the youth, this Catholic combo was probably perfected during the era of Rock's most successful successors, Frank Leahy. For by the late '40s, most of the nation's parochial school nuns were urging their charges to pray for Notre Dame every autumn Friday, for they knew this was the one religious obligation the boys would pursue with glee. Perhaps not coincidentally, Notre Dame not only was more in tune with the Catholic faith during that era, but won three National Championships (I still know some old timers who attended Notre Dame for four years and never saw the Irish lose) as well. In fact, Irish dominance during this era was so daunting that the University of Michigan simply quit playing Notre Dame, with Wolverine Coach Fritz Chrysler citing Notre Dame's Catholicism as an "unfair competitive advantage," because "it meant every Catholic kid in the country followed and wanted to play for them."

Unfortunately, as we assess the situation on the eve of the Obama invasion, this is clearly no longer the case. Currently, Notre Dame football has not won a National Championship since 1988 (not coincidentally, when the outspokenly devout Catholic, Lou Holtz, was still coach) but Fr. Jenkins, having continued the bartering begun by Fr. Hesburgh of Jesus for prestige and God for glory, has unwittingly handed the "unfair advantage" over to the mainstream media. Yes, Notre Dame now gets all the press coverage it could ever want  but at the cost of promoting the MSM message, including the deadly Obama agenda.

Given this fact, how does Notre Dame get Rockne's devoted truthful youthful legions back? Certainly the old model is broken; for not only do few nuns remain in the (fewer) Catholic schools, but many of the schools are run by lay boards no better than Notre Dame's, with teachers as likely to lead their students in a New Age rant or Wiccan chant as an Our Father or Hail Mary. But certainly Knute's way with youth must still work ... if given the right opportunity! So I searched the Rockne files for inspiration ...

I feel that I must express the sympathy and the heart feelings of myself and my family on the terrible loss suffered by the University of Notre Dame and the entire world in the death of Knute Rockne.

I am the father of a crippled boy, twelve years of age. He cannot leave the house and lives on the radio. He [loves] baseball and football, and Knute heard of him last November at the time he was most hard pressed. He wrote Eddie a letter and sent him an autographed picture of himself.

Father, when at noon Tuesday he heard the announcement ... that Knute Rockne was killed, he simply shut off the radio and cried; and when I came home that night he said: "Dad, the best man in the world was killed and I can't help him." Well, Eddie and I knelt down and said the rosary for Knute, and I know he heard the crippled boy pray for him, and ... appreciated it.

We ... heard your wonderful sermon today at the funeral, and I am forty-six years old and not ashamed to say I cried, for the whole world lost a friend when we lost Knute Rockne. And a man who would write to a crippled boy and try to make his life happier under the conditions Knute was fighting under last fall, is a man.

Knute's picture is draped in black in my home tonight, and the kiddies all knelt before it and said the rosary ... But little Dick, six years old, said, "Dad, will there be a Notre Dame next year?" "Yes son, next year and every year, Notre Dame will be there fighting with the Rockne spirit."

So, Father, when all this is over, if you see Mrs. Rockne, please tell her of Knute sending his picture to little Eddie Carty, a crippled kid out in Ohio, and that Eddie is going to pray every night for the one he calls his old friend Knute ...

"Will there be a Notre Dame next year!" I said to myself, frightened at this prophetic prospect, when Knute's new Notre Dame offense suddenly struck me. "Eddie stayed in the house, at home ... that's IT! Home-schooling is the new 'Old School' Catholic schooling!" I realized, and in an instant I was fleeing to catch the liturgy, to once again get the Notre Dame-youth ball rolling ...

I passed the nearby Catholic Church with the rich parishioners, instead opting for the more modest Church with Perpetual Adoration on the edge of town. After the Mass had ended, I headed to the back of church where a large family who attended Mass daily were still praying. Amazingly, as if by divine cue, the oldest daughter got up and began to walk toward me.

"Hello, Teresa." Although I had briefly met the family before, I was not exactly sure how old Teresa was, although I would guess she was about as old as Eddie, the boy in the story. After initially asking her to pray for my daughter Therese's water polo match, in which she was to face a tough opponent while sporting a sore shoulder (Teresa, you'll be happy to know that, thanks to your prayers, Therese scored three goals and played like a warrior!), I got down to business.

"Teresa, I'd also like you to pray for my school, Notre Dame. There's a problem ..."

"Oh yes! Obama's coming there to speak!" answered the well-informed youth, her serious eyes searching mine through her old-fashioned veil.

"Well, Teresa, since you already know, I'm sure you also know that's not a good thing. A lot of bad things are happening there, but there's still a lot of good people there fighting to save Notre Dame, and that's why I came to ask you to pray. It's a battle of good versus evil ... and you're on the side of good!"

Teresa smiled, a smile worth a thousand false Obama promises or twisted Jenkins' explanations. And if Teresa's smile was worth 1,000 enemy words, imagine how valuable a holy youth's prayers (combined with those of countless others) could be.

Valuable enough to get the "unfair advantage" back, eh, Knute?

All kids (with their parents!) are invited to a peaceful prayer procession (concerning Obama's appearance) at the University of Notre Dame this Sunday, April 5, at 2 p.m. EST. And don't forget to pray for Notre Dame!