Tom O'Toole
The saints on sodomy: why the Church Fathers were harsh on homosexual sex

No sin in the world grips the soul as the accursed sodomy; this sin has always been detested by all those who live according to God...Deviant passion is close to madness; this vice disturbs the intellect, destroys elevation and generosity of soul, brings the mind down from great thoughts to the lowliest...They become blind and, when their thoughts should soar to high and great things, they are broken down and reduced to vile and useless and putrid things, which could never make them happy...Just as people participate in the glory of God in different degrees, so also in hell some suffer more than others...for this is the greatest sin. -St. Bernardine of Siena (1380-1444)

How beautiful you are, how fair, my love, daughter of delights! Your very form resembles a date-palm, and your breasts, clusters. I thought, "Let me climb the date-palm! Let me take hold of its branches! Let your breasts be like clusters of the vine – and the fragrance of your breath like apples, And your mouth like the best wine that flows down smoothly for my lover, gliding over my lips and teeth." -Song of Songs 7:7-10 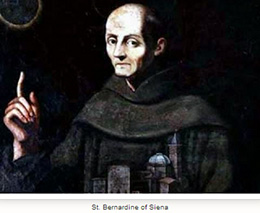 In this Culture of Death era, when Duck Dynasty's Phil Robertson nearly lost his job by quoting St. Paul's teaching on homosexuality, it's unlikely Pope Francis or many – if any – bishops will publicly proclaim the Catholic Church Fathers on the same subject. Due to a combination of concentration on compassion owed the homosexual person, trying to stay politically correct, or perhaps even fearing jail time for a homophobic hate crime, the clergy have largely begged off talking about the not-so-pleasant consequences of the sexual act. Still for the sake of seeing the incredible continuity of Church teachings through the ages, it's now necessary to revisit these directives that both agree with Paul's warnings to the Romans and Corinthians and at the same time would make his skin crawl.

Our first quote comes from Tertullian (160-225), who although a towering Church Father in the early Church, never made sainthood after falling for the Montanist heresy later in life. But his early teachings are still considered quite orthodox, and his directive on the homosexual act, "But all the other frenzies of passions – impious both toward the bodies and toward the sexes – beyond the laws of nature, we banish not only from the threshold, but from all shelter of the Church, because they are not sins, but monstrosities," not only picks up where St. Paul (and Christ) left off, but as stating the act is something beyond ordinary sin, seems to take the gravity of gay sex to another level.

In the fourth century, St. John Chrysostom (347-407), a Doctor of the Church and perhaps the greatest of the Greek Fathers, continued on the theme, while using the analogy of gay sex being the equivalent of hell on earth: "But if thou scoffest at hearing of hell and believest not that fire, remember Sodom. For we have seen...even in this present life, a semblance of hell...an unquenchable fire...[f]or such is the burning of Sodom...Consider how great is that sin, to have forced hell to appear even before its time!...For that rain was unwonted, for the intercourse was contrary to nature, and it deluged the land, since lust had done so with their souls."

Pope St. Gregory the Great (540-604), a very holy and versatile Doctor/Father of the Church, who was responsible for wide ranging accomplishments from clergy reform to the introduction of Gregorian chants into worship, continues on the hellish theme, explaining how the metaphoric stench of gay sex becomes literal: "Sacred Scripture itself confirms that sulfur evokes the stench of the flesh, as it speaks of the rain of fire and sulfur poured upon Sodom by the Lord. He had decided to punish Sodom for the crimes of the flesh, and the very type of punishment he chose emphasized the shame of that crime. For sulfur stinks, and fire burns. So it was just that Sodomites, burning with perverse desires arising from the flesh like stench, should perish by fire and sulfur so that through this just punishment they would realize the evil they had committed, led by a perverse desire."

St. Peter Damian (1007-1072), a renown Church Father from the middle ages who had to deal with homosexuality within the clergy, elaborates on the damning nature of gay sex even further, explaining that this sin against the body causes one to lose their mind as well: "Truly, this vice is never to be compared with any other vice because it surpasses the enormity of all vices...It defiles everything, stains everything, pollutes everything. And as for itself, it permits nothing pure, nothing clean, nothing other than filth...The miserable flesh burns with the heat of lust; the cold mind trembles with the rancor of suspicion; and in the heart of the miserable man chaos boils like Tartarus [Hell]...In fact, after this most poisonous serpent once sinks its fangs into the unhappy soul, sense is snatched away, memory is borne off, the sharpness of the mind is obscured."

Although I have quoted only male saints to this point, it's important to note that women saints were equally condemnatory of gay sex. St. Catherine of Siena (1347-1380) was a mystic Doctor of the Church who was instrumental in bringing the papacy back to Rome. She also writes of the sin of homosexuality in one of her visions of Christ explaining how this transgression against the body and the intellect concludes with a loss of the soul: "[B]ut these wretches not only do not bridle this fragility, but do worse, committing that accursed sin against nature, and as blind and fools, with the light of their intellect darkened, they do not know the stench and misery in which they are. It is not only that this sin stinks before me, who am the Supreme and Eternal Truth, it does indeed displease me so much and I hold it in such abomination that for it alone I buried five cities by a divine judgment, my divine justice being no longer able to endure it." 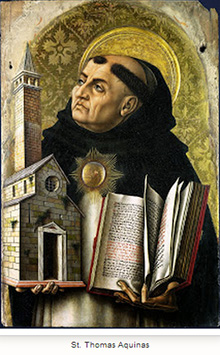 But lest these vivid visions of hell fire rouse our passion (both pro and con) to the point our intellect is also inflamed, let us return to the calm and rational reasoning of perhaps the greatest intellect the Church has produced, why this sin "stinks" so much. St. Thomas Aquinas (1225-1274), dubbed "The Angelic Doctor," for his prolific yet profound apologetics, explains in his commentary on Romans, Chapter 1, that, "If all the sins of the flesh are worthy of condemnation because by them man allows himself to be dominated by that which he has of the animal nature, much more deserving of condemnation are the sins against nature by which man degrades his own animal nature." In other words, it is worse than adultery or fornication because it is also unnatural, degrading man, who was made in the image of God, down past the plane of beasts to the level (in Tertullian's words) of monster, or even demon.

Still, as powerfully as the saints made the argument of homosexuality as a sin against nature, it is important to note that agnostics (up until recently) unanimously made nearly the same argument against it. Natural Law, which explained good and evil apart from God, was accepted nearly universally for centuries, only to be trampled under the small but vocal LGBT lobby. Still, if Natural Law affirmed the union of man and woman because of their physical complementarity, Christianity did this law one better by showing how the natural compatibility of man and woman led to the completeness of their souls. Indeed, far from being prudes, the saints (yes, even the celibate ones) who referred to the Church as "The Bride of Christ," were the most romantic souls of all. Thomas Aquinas had the Song of Songs read to him on his deathbed, while John Chrysostom, so set against sodomy, wrote this beautiful passage on married love, suggesting that young husbands should say it to their wives: "I have taken you in my arms, and I love you, and I prefer you to my life itself. For the present life is nothing, and my most ardent dream is to spend it with you in such a way that we may be assured of not being separated in the life reserved for us...I place your love above all things, and nothing would be more bitter or painful to me than to be of a different mind than you." -CCC 2365

Simply put, this love was so great (in fact "The Greatest" [1 Cor. 13]), that the saints knew that anything else paled in comparison. If the natural relationship gave a glimpse of God's love to man, surely Christ brought this love of a man to a woman to completeness. To settle for a version of love that is against God's vision, is to proclaim oneself greater than God – and the saints and Church Fathers were only doing their duty in explaining as to the one place that vision always leads.